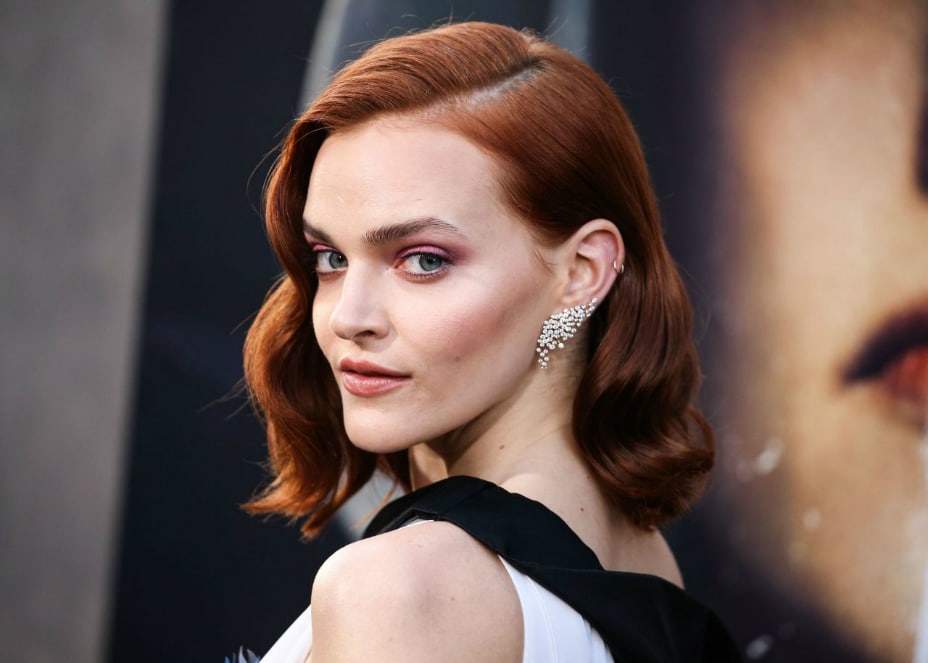 One of the key reasons that we are thrilled to speak with Madeline Brewer of The Handmaid’s Tale is because her character Janine has gone through perhaps the greatest transformation between season 1 and season 2. Much of this characterization is because of Brewer and her energy and dedication to the fascinating role. She has not only survived but thrived in a role that seems like a natural progression for the American actress, who previously shined in a role on Orange is the New Black.

We requested to speak with Brewer remotely during the recent L.A. Handmaid’s Tale junket and she was a welcome first interview on a busy press day (for both of us).

Here is a condensed and edited version of a very spirited interview with Madeline Brewer.

Brief Take: Janine is very much a fan favourite character and now, in season 2, we see her bring her child-like earnestness to the Colonies. What has been your favourite aspect of portraying her this season?

Madeline Brewer: Last season, her world and her coping mechanism and her whole past, and how that affects her in Gilead, was hard to explore. Exploring her this season has been a delight because, as the episodes go on, she’s more lucid. You see her sense of humour and you see someone who is so grateful to be alive, and that’s her driving force this season. It’s definitely been an exercise in gratitude.

BT: Has playing her changed your outlook on life?

MB: I’d like to think that playing her has opened me up a lot to taking my emotional pulse. I’ve done a lot of research on why Janine is the way she is and what has happened to her in her life that has made her develop these defence mechanisms and coping mechanisms. So in doing that with her, I’ve always had to do a lot of that for myself. So it’s been a lot of learning. I was just about to make a Kylie Jenner joke, but I won’t. [laughs] I was going to say, “there’s been a lot of realizing stuff”, but there has been a lot of soul searching and a lot of understanding that the way that I am sometimes is just a direct product of something happened in my childhood, for example, or something that happened when I was twelve or in middle school. But just taking that and moving forward with it, instead of “well this is the way that I am and you just have to accept it”. That’s not the way it has to be though. You can grow and you can change and do the work on yourself, because that’s how you become how you want to become. There’s been a lot of that.

BT: Max Minghella had mentioned that he enjoyed how expansive this season is because he got to work with a lot of new people in the cast. In this season you get to act opposite a new scene partner, Alexis Bledel, as your characters stick together in the Colonies. Janine very much opens Emily [Bledel]’s eyes regarding a more positive outlook on life. What’s it been like working with her?

MB: I mean Alexis is a dream! An honest to God dream person. I mean I could say that about literally anyone I’ve gotten to work with on the show. Everyone is so present and so giving and makes you feel comfortable and safe. I’ve been watching Alexis for years and getting to see how we each wrap ourselves around every scene and looking at it from every angle, and we just bounce it all off of one another. Plus we bounce off of each other as our characters, we’re just so opposite. Our outlooks on the world could not be more conflicting. Both of our characters have made significant changes since last season and have gone through so much, especially her character. [laughs] It was just really cool and really a gift to be able to explore those scenes and establish more of Emily and Janine’s relationship, which we hadn’t seen before in season one. 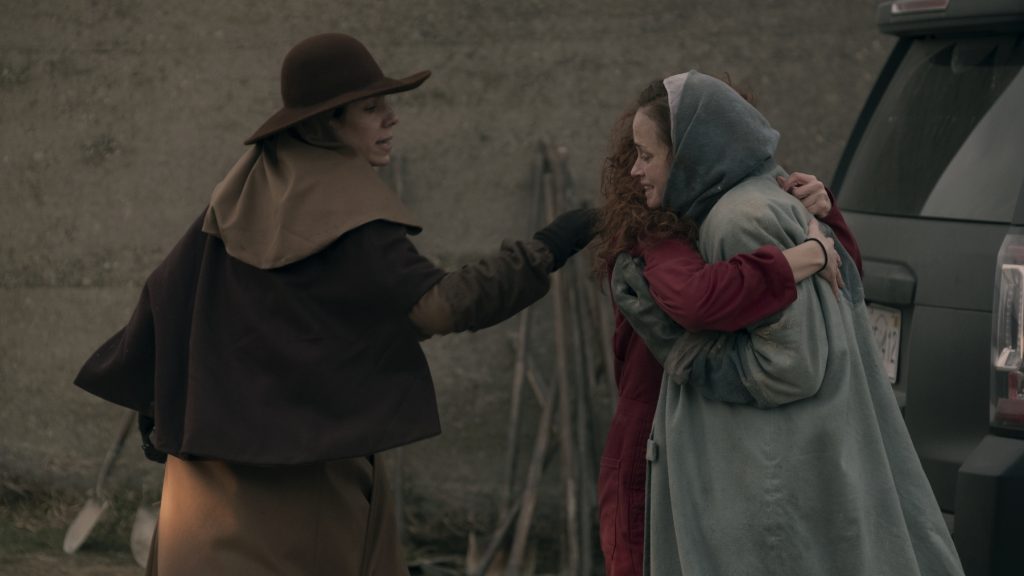 BT: What has been your experience been like working with the formidable Elisabeth Moss as your executive producer?

MB: Lizzie is the captain of our ship and our leader. I can say this of Bruce [Miller] and Warren [Littlefield] too, but our leaders, the people who have brought this show to life, their work ethic trickles down from there. They, and Lizzie, have set this precedence of ‘we are going to make a great show, we are going to tell truthful stories, we’re going to make a show that people can relate to but also enjoy and also to feel things from’. That very genuine desire to create something of importance, yet also enjoyable, and do it and have a great friggin’ time doing it, that comes from the very top. I feel like every day on set Lizzie leads with that.

BT: You’re creating an important show but it seems like you all have such a great time making it too.

MB: We have a great time on set! I’ll tell you that when I have to put my eyeball on in the makeup trailer, I make them play “How Far I’ll Go” from Moana every single time so that I can sing it. When I’m getting my eye put on I get really stressed out, so the music helps. 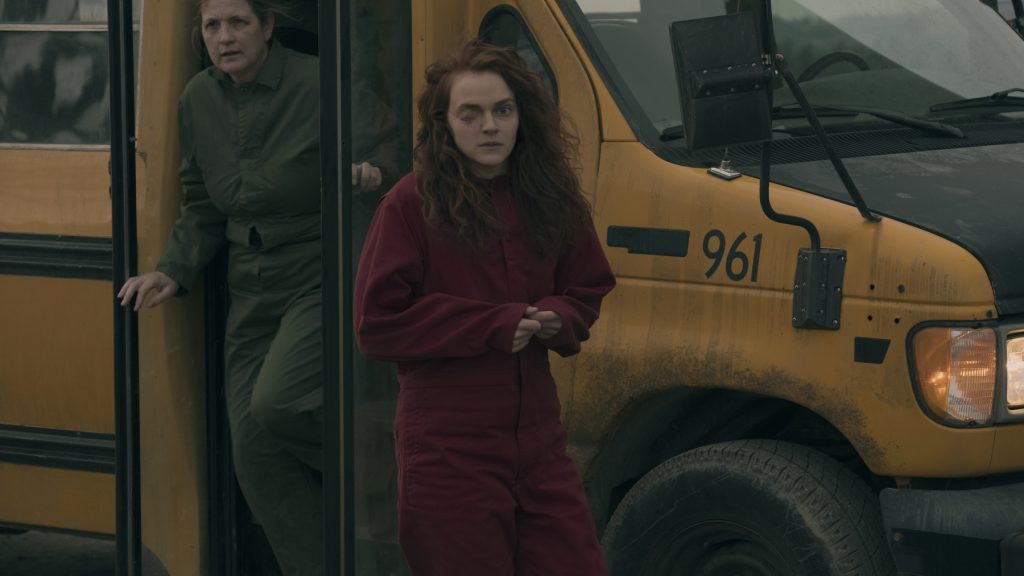 BT: Who are some people in the industry who inspire you?

MB: Lizzie Moss! I know that’s just a given but after working with her and witnessing her work ethic, her ability to come on set every single day and be gracious and give her all, and then immediately wrap up one job and start another, and leading with that same gracious kindness? I’m so in awe of her! I can’t believe she’s my friend. I’m also so inspired by all of the women behind Me Too and the Time’s Up movement. Tarana Burke is remarkable. Any woman who chooses to pursue a career in Hollywood I think is a fuckin’ rock star. I attended this dinner the other night, Laura Dern hosting the In Style magazine’s Badass Women dinner. Laura Dern is such an angel! I sat next to her daughter Jaya and she’s 13 but she’s so cool and so amazing and so smart. I was surrounded by all of these unbelievable women and Cheryl Strayed was there and I just love her. I digress but I’m getting to my point. [laughs] Ava DuVernay made a speech that focused on the women who aren’t in Hollywood and aren’t sitting in the Sunset Tower hotel and I was so inspired by her speech and by all of those women that she was celebrating who make the world go round.

The Handmaid’s Tale season 2 episodes 1 and 2 are currently streaming on Hulu in the US and air on April 29th at 9pm on Bravo in Canada. New episodes stream on CraveTV the day after their linear broadcast on Bravo.