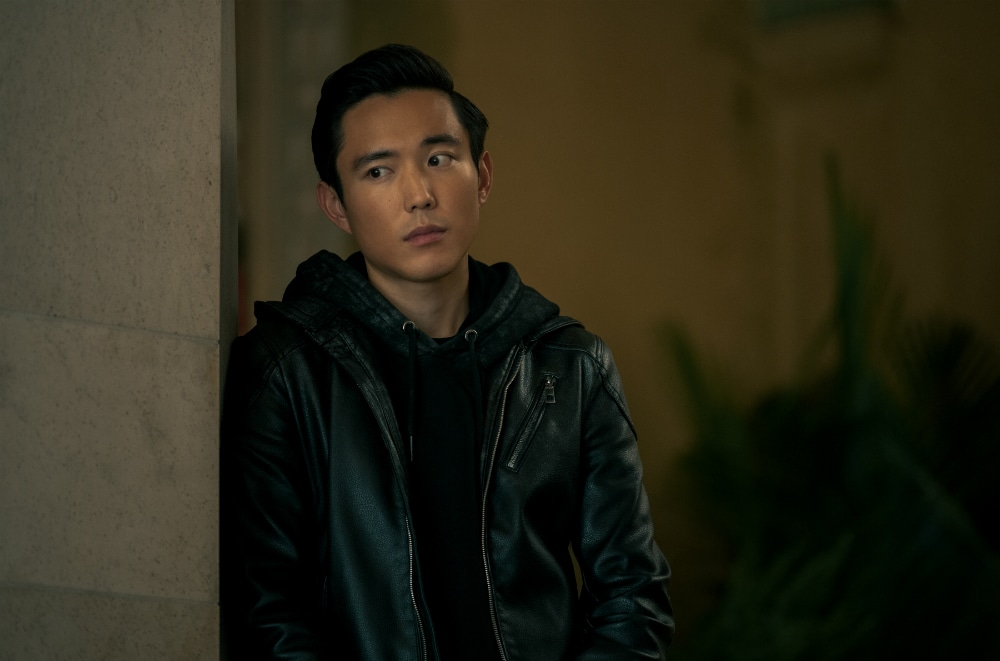 What’s great is that we don’t have to be a drunk Klaus or member of the Hargreeves family to have the spirit of Justin H. Min enter our body. Min, who plays Ben Hargreeves or Number 6 or The Terror on the wildly popular Netflix series The Umbrella Academy, is not actually living on the series, but that doesn’t stop him from being a successful part of the show, which up until Season Two, he wasn’t even really allowed to discuss, which is why we were thrilled to get a chance to speak with Min about all things related to the show.

We spoke on the phone with Justin H. Min on the Netflix junket day for the series and the following is a condensed and edited version of our lively (haha) chat.

BT: A wise person once said that there were two kinds of interviews.

Justin H. Min: Okay [laughs loudly] All I’m saying, is I prefer the ones in which there’s a semblance of research done, okay? But I trust you, Charles, I trust you.

BT: I heard a rumour that in season one, you had to hide away a little bit, that they didn’t want you to be present for the press. You were at the premiere, but what’s it like to be able to talk about the series finally?

JHM: It’s jarring. It’s very jarring, [laughs] Charles. My entire life has been a bit of a secret for almost two years now. It’s weird to finally be out there talking about the show. I was used to not talking about it. Um, yeah! It feels…it feels wonderful. It’s a project and a role that I feel absolutely honoured and grateful for just being able to talk about it openly and it’s [chuckles] really nice. I obviously understand why they had to keep it a secret for so long, I think it was a great little reveal, especially for the fans of the comic to sort of know of Ben but never expected to see him in the show in that capacity. 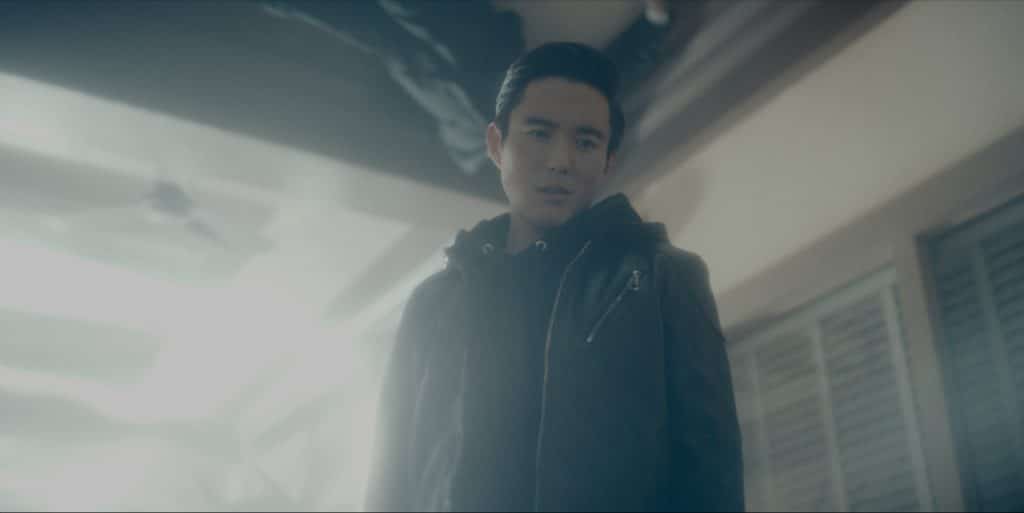 BT: You were not in the original dance sequence, but during the date reveal, not only were you a part of it, but you actually revealed the date. What was it like to film that?

JHM: [laughs] I was incredibly thankful that I was not in that initial dance sequence, Charles. [laughs] I’m not much of a dancer, myself. When they asked us to do that, I was really hesitant [laughs] and was brought in to do maybe a little bit and nod, but once that song started playing, that song that has been in our lives non-stop for the past two years, your body just keeps going. So yeah [laughs] I had some fun with it, and they were nice enough to let me reveal the date. One of the Netflix marketing people sort of drove all the way over to my house to do a contactless delivery, to give me that little thing that they made with the date on it and yeah, I had so much fun doing that.

BT: This show has an incredible soundtrack. Do you have a song or a playlist that brings you back to the series?

JHM: The song choices are absolutely incredible and I think that I’ve always liked music, but to be quite honest, when I’m watching film and tv, it’s not necessarily one of the first things on which I focus, but it was interesting to watch our show and to really feel like the music played almost like another character, the way that they used the music to sort of undercut some of the drama or to use a bit more humour and spice to the scenes is absolutely incredible. I’m very grateful for the show to bring me back to some of the classics. I mean there’s so many eighties hits in season one and we have even more classics in season two, even an ode to some incredible sixties artists, and those are not necessarily artists and songs that I grew up with or with which I am very familiar, but I was so stoked. We even have an incredible Frank Sinatra number in the first opening sequence that I love. We even have a Swedish cover of the song ‘Hello’ (by Adele) in the second season, which is sort of a nod to the Swedes who are the assassins that are chasing us all season, so yeah, I love the music and I think that it’s such an integral part of our show. 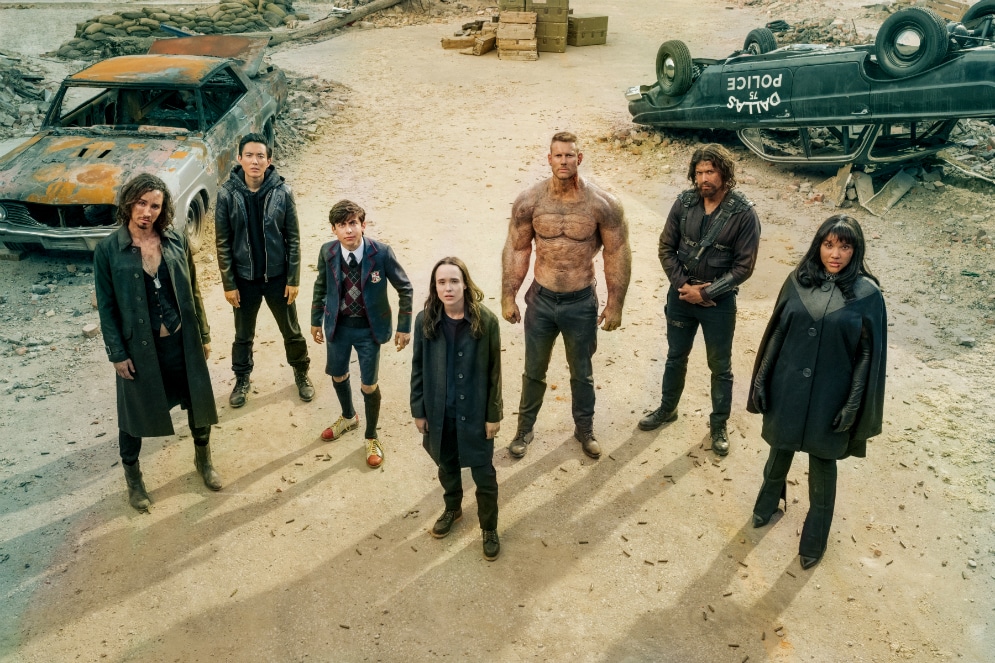 BT: Season one of the series is great, but season two might have even topped it in terms of great moments. What was your favourite?

JHM: Very good question. Two come to mind. Number one is the possession scene in episode 6 or 7, I believe. And that was just a lot of fun to play with Robbie (Sheehan) in that way. It was a bit annoying because he knew that he would be possessing me at a certain point in the season, he started to just imitate me all the time. I would be talking to him and he would just start to repeat what I said and tried to copy my cadence and my mannerisms, which got incredibly annoying after a while [laughs], but I think that it really paid off. It was just really fun because we got to do those scenes twice, in exactly the same way, so he would shoot it and then I would shoot it and then he would shoot it and I would shoot it and it was very technical because our hand movements have to match, our eye lines have to match, our body movements and our body posture have to match, just so that they would be able to intercut between the both of us, so that the possession scene would make sense. And then the second one I would say, is that there is a scene in which I finally get to shoot with Vanya, with Ellen Page, in episode nine, and you know, I love Mr. Robert Sheehan, he’s a brother to me, but it was so refreshing and nice to finally be able to shoot a scene with someone else in the cast [laughs] and one of my other siblings, so I had a lot of fun playing around with her. 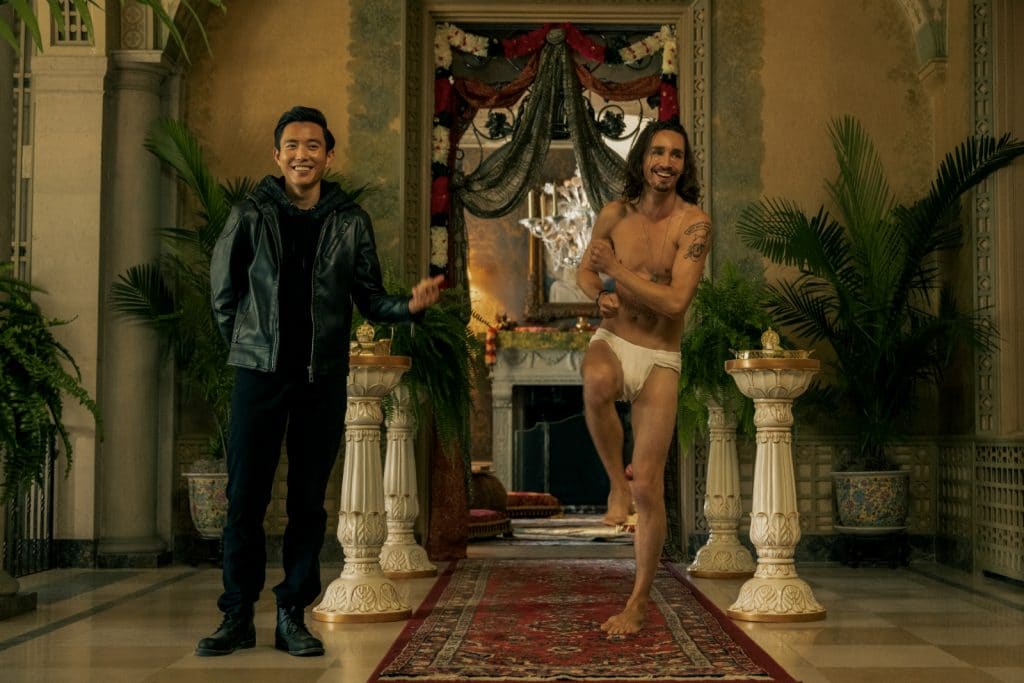 JHM: [laughs] When I work with the other siblings, it’s primarily in a family scene and my favourite prank is to try to get people to react to me when they’re not supposed to, because they obviously still aren’t able to see me. We’ve definitely had to shoot a few takes again of scenes that somebody [laughs] would actually make eye contact with me or react to me, so I’ve had a lot of fun doing that for the last couple of years on set. I mean, Ellen, you know, even before we started that scene, I just hugged her, because I was just like, it’s so nice to act with someone else. [laughs loudly] And she’s just an incredible actress, she’s completely present, that was such an intimate scene that day and the mood was quite somber, because it’s an emotional scene for both of us. And it was nice to be able to explore some of Ben’s relationships with his other siblings, which is integral to Ben’s history as well. I mean, there’s even that second in which Klaus possesses Ben and he’s having that moment with Diego, Ben clearly has a soft spot for all of his siblings and I think his siblings for Ben, so I think that when he died, it was a large reason why the family split up.

BT: What does your photography and your production with Wong Fu mean to you?

JHM: Photography has always been a joy of mine, something that I have always done way before acting. I was going to go into photojournalism for a long time and now it’s slightly more of just a hobby. And my work with Wong Fu, I mean, they were pioneers for us in terms of the Asian-American community and have been sort of an incubator of Asian-American talent. You look at everyone who has worked on Wong Fu shorts on YouTube and they’re all the Asian-American stars that we know today, so they’ve just done so much for us and I’m always happy to go back and work with them whenever I can.

BT: In this series, your family saves the world and the world needs some saving right now. Why do you feel like this is the perfect series at this time and what themes do you lean into?

JHM: Yeah, I would say that first and foremost, aside from the themes, which I think are incredibly amazing, I just hope that the show provides a sense of relief and a breath of fun and entertainment, particularly in these surreal and overwhelming times in which we are living right now. And if even one person can escape that for a few hours through our show, I think we’ve done our job—as actors, as artists, as entertainers. In terms of thematically, you can’t get more timely and relevant than our show. The show really explores “otherness” in so many ways, in each of the family members. You have Allison, who’s obviously dealing with the Civil Rights movement as a Black woman in the sixties; you’re dealing with pansexual Klaus, who is obviously unique to that time as well; you’re dealing with Luther, who looks like an ape [laughs]. There’s otherness in all of those siblings, but I think that what the show demonstrates to us so well is that it’s our uniqueness and “otherness” is our strength, and it’s these things that really empower us to be authentic to who we are, and these are the types of people who can create real, lasting, sustainable change. That’s one of the things that I love. And at the end of the day, I just love being a family, right? I think that’s one of the strongest tentpoles of our show, that it’s not focused on superpowers and fighting crime or fighting bad guys. At the end of the day, our show is about a family, a dysfunctional family, but a loving family. And I think that it hits a chord with a lot of us who have very dysfunctional families, like myself. [laughs] But at the end of the day, we’re there for each other and we love each other. 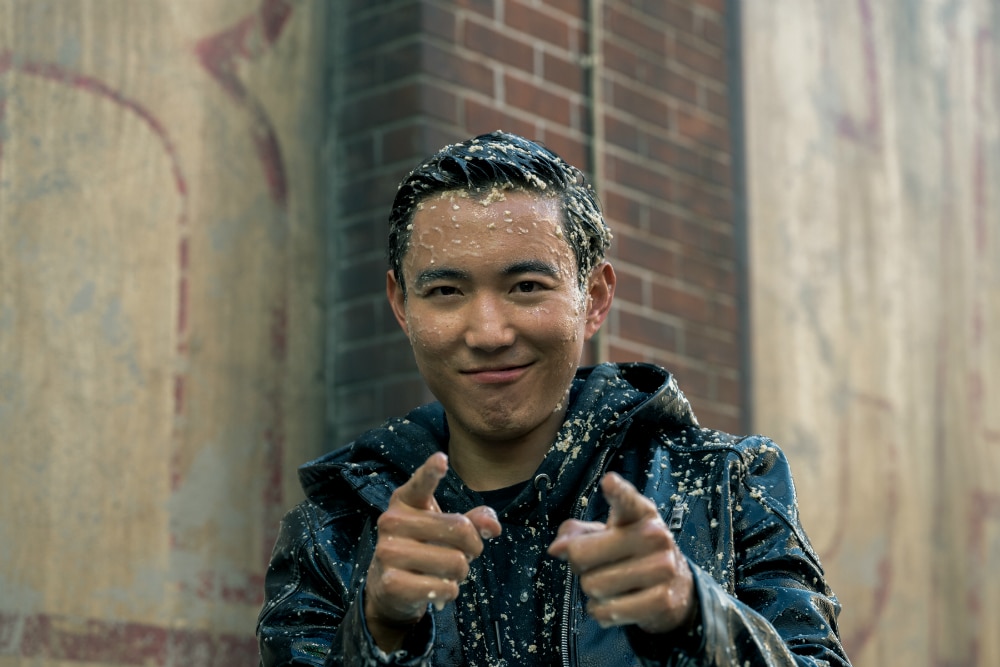 BT: What do you like most about The Umbrella Academy pairing with After Yang and where do you think that you are going to be going from here?

JHM: Hitting me with the tough questions, Charles. I mean After Yang, we can talk for an hour about that project, it is a dream project to work with Kogonada. But you’re right! In a lot of ways, it was also dealing with similar themes of otherness, Asian-American identity, what that means and what that looks like, even as an Artificial Intelligence robot. At the end of the day, I want to work on projects with stories to which I connect, with characters that I want to explore and I’ve been lucky enough to have that with these two projects and I just hope that this continues and I am able to find things that resonate with me and where I’m at in my own life and my own exploration. 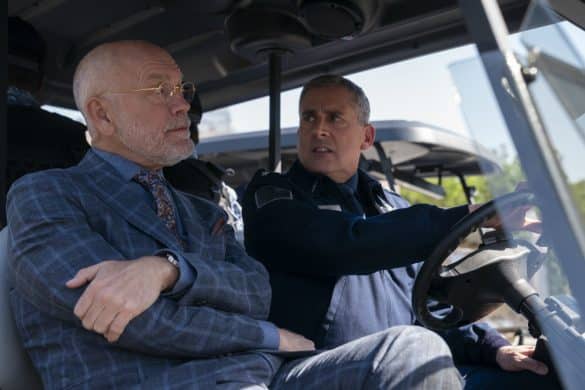 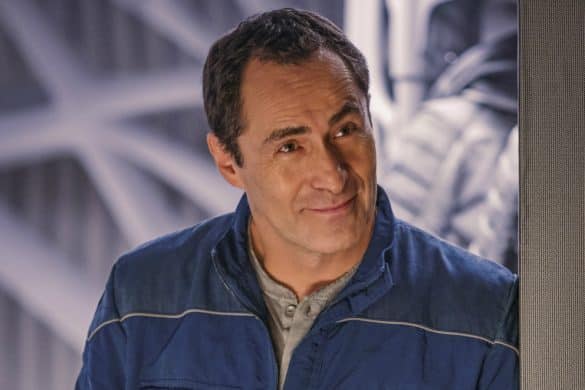 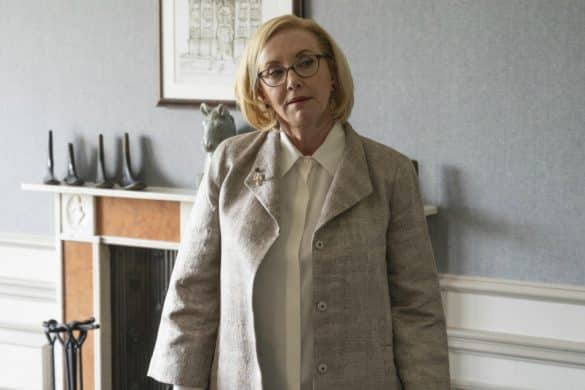