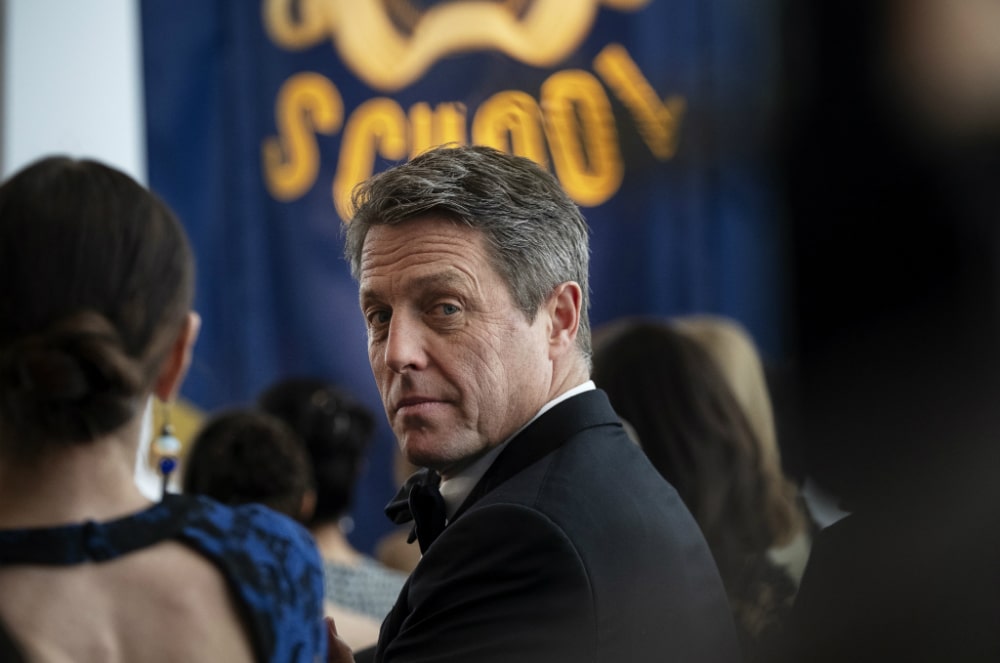 Hugh Grant needs no introduction. The English actor has charmed audiences in romantic comedies (Notting Hill, Love Actually, Four Weddings and a Funeral, Sense and Sensibility, and countless others), played unsavoury characters in film and tv (A Very English Scandal, The Gentlemen) and yes, gave the performance of his career in Paddington 2. In the HBO limited series The Undoing, Grant plays an amalgamation of all of the archetypes he’s known for playing, opposite fellow Paddington alum Nicole Kidman. At the recent Zoom video junket for the series, my call time was four AM to speak with Hugh Grant (9 AM his time), and let’s just say he made it worth my while by being hilariously droll and playful in our candid conversation. The following is a condensed and edited version of that chat.

How did you approach crafting your portrayal of Dr. Jonathan Fraser?

Hugh Grant: This is an impossible press junket [laughs] because if I talk too much about my character, I could be spoiling things. It’s such a whodunit and one of the big appeals of the whole project is you’re dealing with surfaces and what they don’t show about what might lurk beneath.

I think Harold Pinter had a phrase about the weasel beneath the cocktail cabinet and I suppose it’s that – what appears to be a pretty perfect existence for these people turns out to be fractured by very dark forces. So it’s certainly about that but it’s also about that strange syndrome where if your other half in life isn’t quite perfect, you kind of know it, and choose to ignore that and you make them perfect and fill in the gaps. I think we all do that. 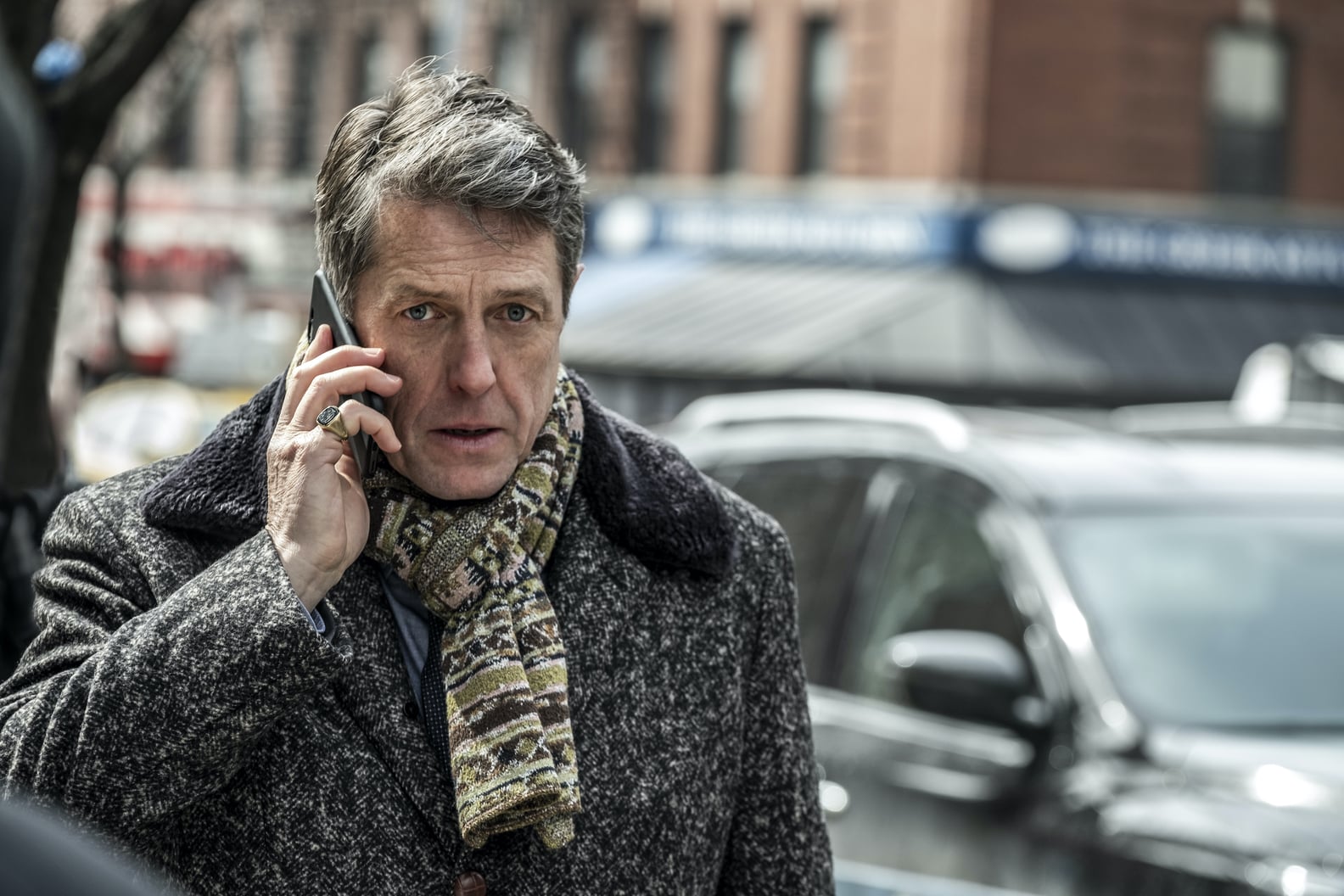 In 2003, you said that “at 23, I made a big mistake by taking up acting.” At this point in your life, do you still consider it a mistake, and if so, why did you accept the role of an unfaithful Doctor in this series?

HG: I feel marginally less bad about being an actor now than I did in 2003. That was a low point. I’ve almost enjoyed some of the acting that I’ve done in the last six or seven years, which is very unlike me. It’s nice to break free of having to be a leading man in love, so it’s been a bit more fun. And then this one, I couldn’t say no. I mean I’m always looking for a reason to say no to jobs, if I can possibly find one. For this one, the pedigree was too classy, with Susanne (Bier), Nicole (Kidman), David E. Kelley. HBO is classy.

You’ve said in the past that you’re drawn to a great script. Is it easier to spot with a project like this as opposed to something like Paddington 2, which also was great but in a different way?

HG: Well no, they’re just different genres. I could tell instantly in both cases that the writer could write. It only takes literally two pages and you think “yeah ok, this person can write”, and I’m afraid, equally, the other way around. “Ugh, this is turgid”. So yeah, you can certainly see if they have a talent for writing dialogue, “do I want to turn the page?”. Sure, sometimes the story might fall to pieces or come off the rails a bit, but the essential black and white quality of whether you have the talent to write, you have the expertise, or you don’t. It’s quite binary, I think. 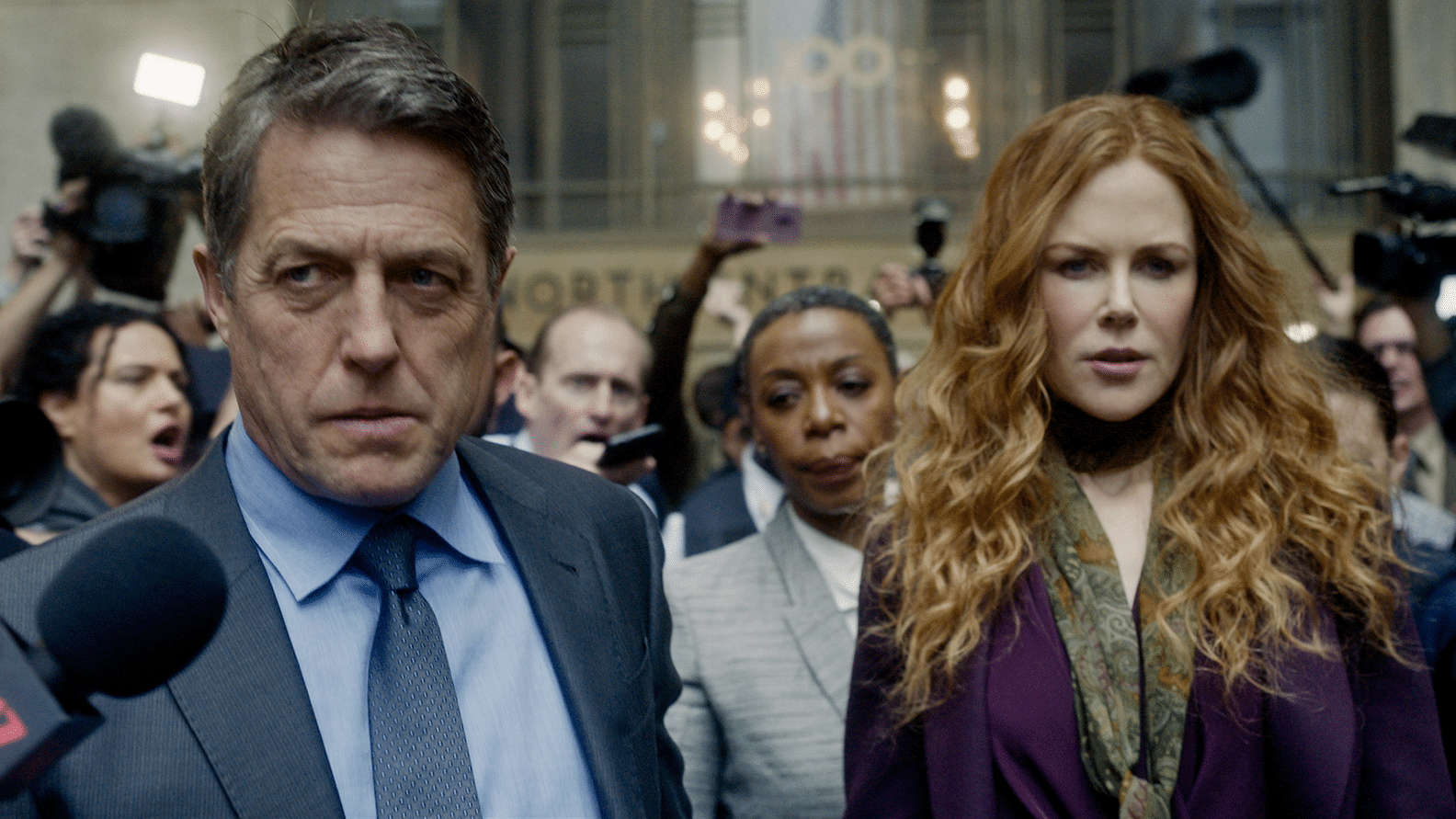 HG: [laughs] Well I actually did try to put layers in all those romantic comedy characters, it was just harder. For some reason, evil or screwed up people are easier to act and more fun to act, and always more attractive to audiences, I really don’t know why exactly. I think possibly somewhere inside of us, we all know that we’re all evil and we respond to evil, whereas niceness is possibly just a veneer that we put on top of our evil natures to make us fit in and it’s sort of less attractive, less fascinating. That’s always been the case – people are not interested in the good characters, they’re interested in the evil characters.

Do you have a favourite memory from filming or down time on set?

HG: [laughs] I’m used to just doing films which are just ten weeks, usually, and this went on for six bloody months. So I remember enjoying the last day very much and I think I horrified people by giving everyone cigars, including the boy who played my son, Noah (Jupe). He loved his cigar, but I don’t think his Mum liked it much. 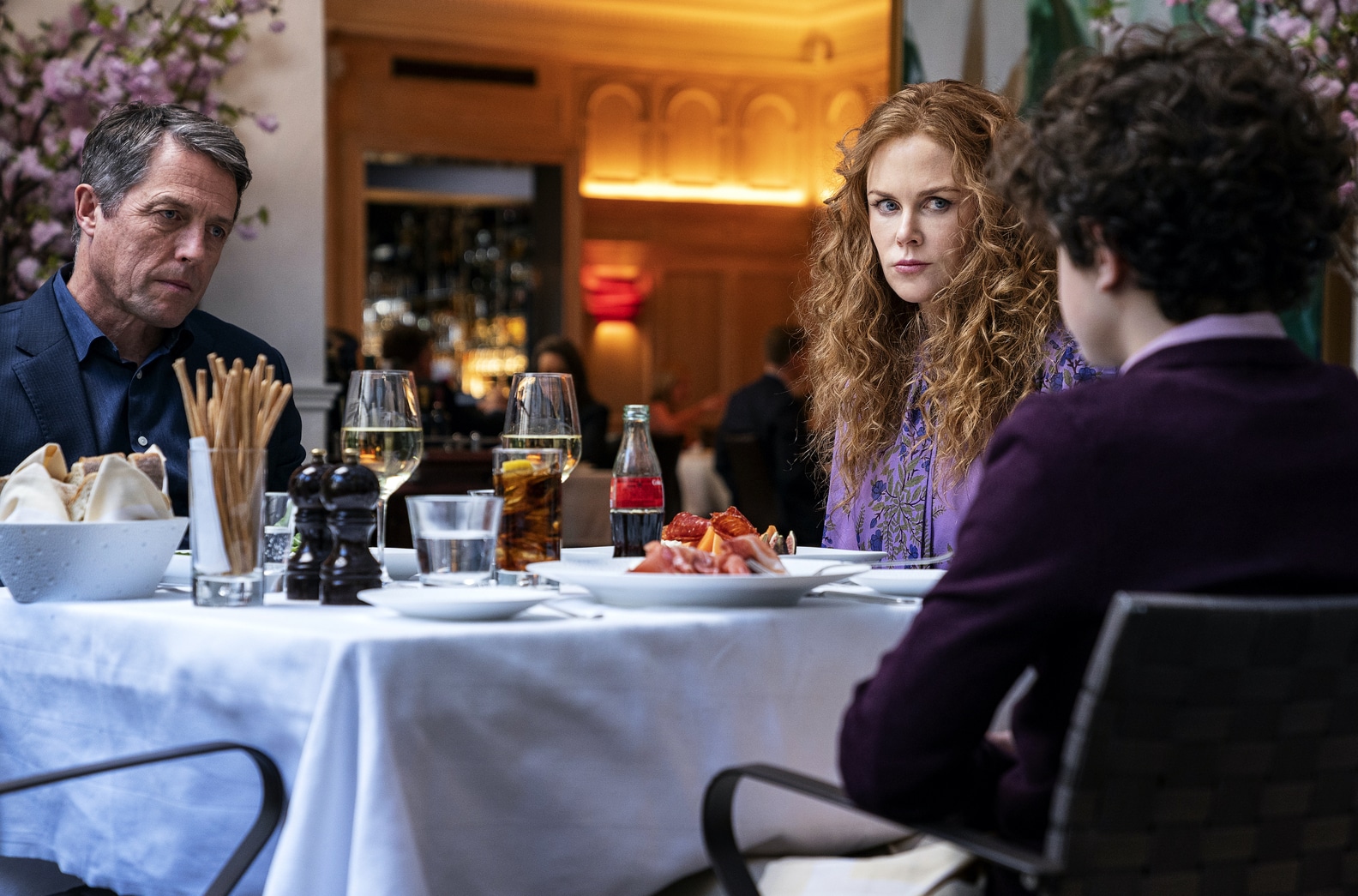 HG: Well I was all ready to be intimidated by Donald Sutherland, he’s a kind of icon, but he turns out to have a mental age of about six. He just likes silly jokes about bodily functions, so we got on very well. Right from the go, we were making a cup of coffee together at the read through and he showed me some cruel, black story on the internet about the death of an animal or something, and it was making him laugh, and I thought “oh, this will be fine”.

How was your experience working with Matilda De Angelis?

HG: I felt very sorry for Matilda because she came into this, it was her first time being in an American project I think and it was her first time in America, and she had to come straight in and do all kinds of terrible things with this fat, old actor. But she took it really well. She smoked about a hundred cigarettes, that’s what got her through the day. I like her very much. She’s a proper Italian.

Can you talk a little about collaborating with Susanne Bier and whether you both saw the character the same way?

HG: Well I always do this, but I worked out a whole backstory for this character and I thought that backstory would be interesting to bring in various ways to the screen, the story we see. But at the last moment, I think it spooked Susanne. It’s so difficult to talk about this project, as I said earlier, because of the whole mystery and whodunit stuff, but I think she thought some of my ideas might make my character look fishy in a way that she didn’t feel I should look fishy. 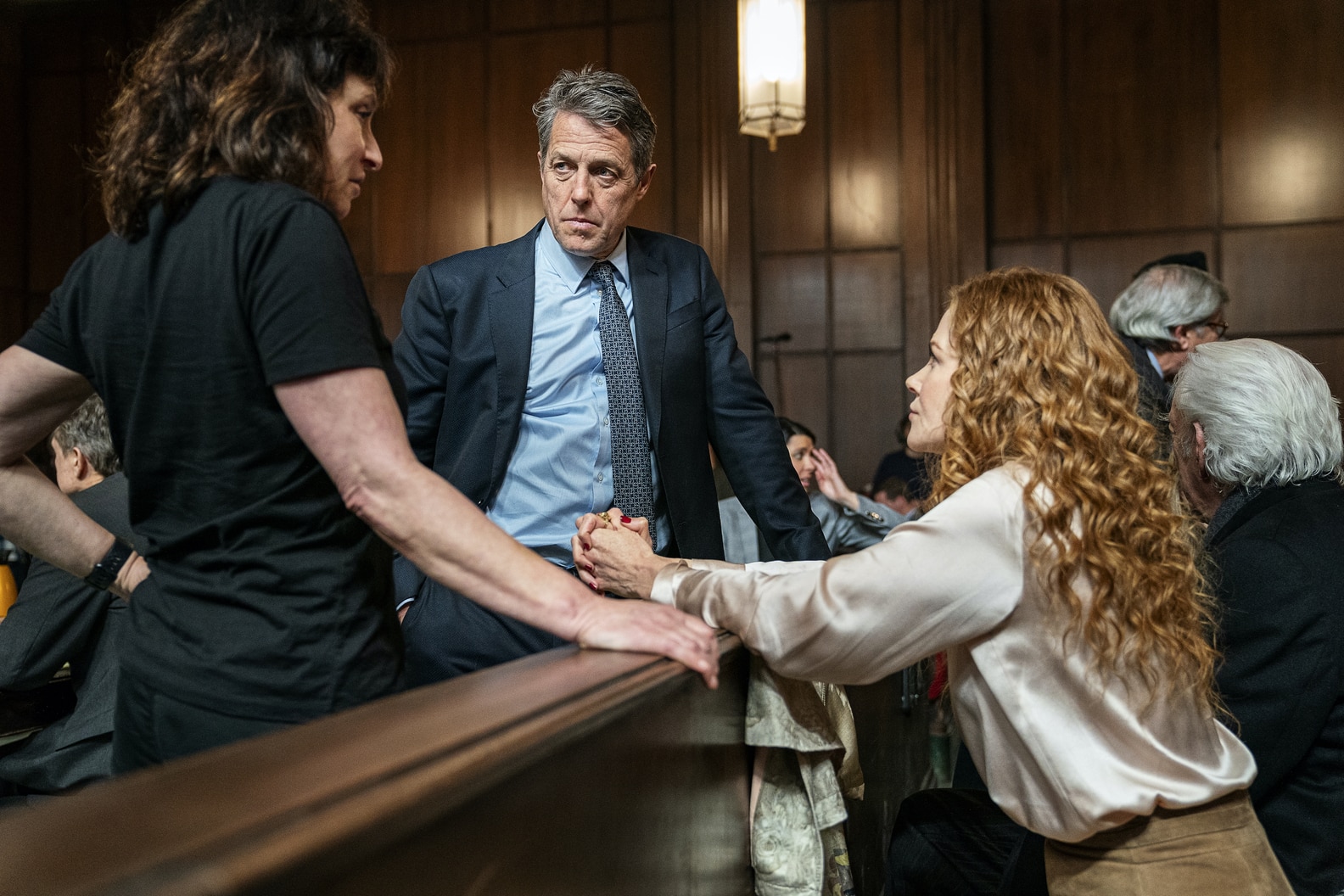 What was it like working with Nicole Kidman as your scene partner and also getting to know her as a fellow performer?

HG: Well I sort of knew Nicole anyway because we’ve been bumping into each other for 25 years at parties and things. And, in fact, I had dinner with her back in the ’90s, with her then husband, and I always knew we got on very well. I like Aussies and she’s got that Aussie sense of humour going on, so we always got on very well. I was a bit scared of her Oscars. Like “oh Christ, I’m going to do deep dark drama with someone who’s really good at this”, but once you’ve done it with Meryl Streep, nothing else can be as frightening as that. Nicole was actually lovely, easy peasy. It is, in the end, about talking to each other rather than “I give my performance, my closeups, now it’s your turn”. She’s very, very good at making it about talking to each other, so you are actually communicating. The camera seems to like that best.

The Undoing premieres tonight at 9pm ET on Crave