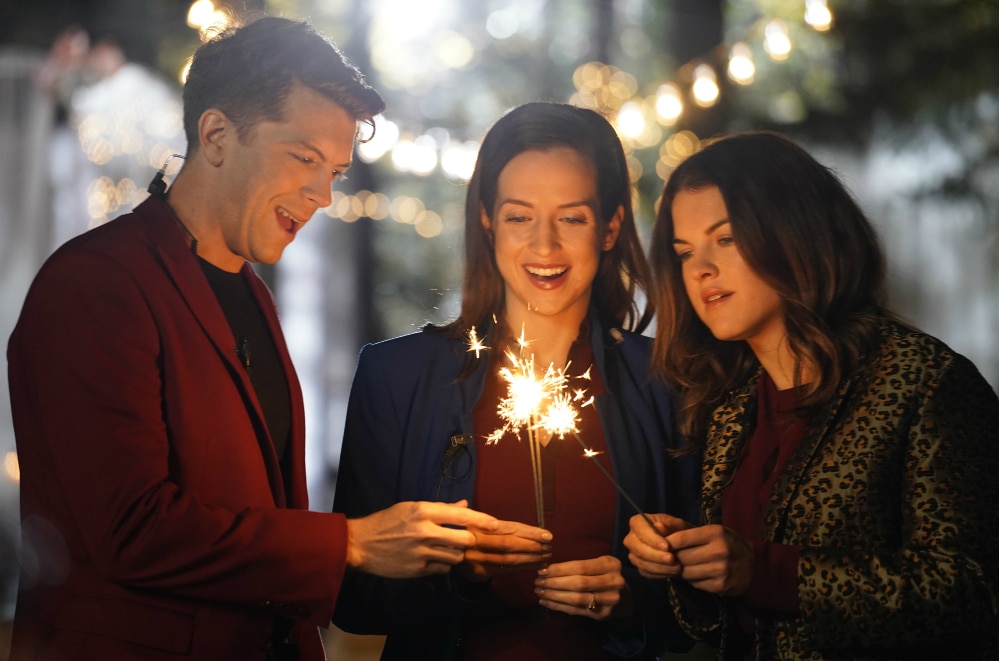 What kind of feels like a different eon ago (it was only about three weeks), Brief Take was invited to the Newmarket filming location of the Brain Power Studio / Citytv series The Wedding Planners (starring Michael Seater, Kimberly-Sue Murray and Madeline Leon as siblings that, as the title suggests, go into the business of wedding planning). The trio conducted interviews on the set, which in this case was on three director’s chairs (appropriately) by a stained glass window in an upstairs room in a Newmarket chapel.

The series is set to air as a part of Fall in Love Fridays on Citytv and feels like the appropriate series to be watching right now, as it is heartwarming and romantic. Seater, Murray and Leon were all delightful and we spoke with them right before the rainy day was coming to its conclusion.

The following is a condensed and edited version of my fun sit down chat with Michael Seater, Kimberly-Sue Murray (who you will read soon has a message for a particular fan base to watch the show), and Madeline Leon of The Wedding Planners.

Brief Take: You are all writers and directors in some capacity.

Brief Take: But here as actors, what has being on that side brought to this experience?

Kimberly-Sue Murray: Oooh! Well, for me, I haven’t produced or directed as much as this guy [gesturing to Michael Seater], I find that from producing, I’ve learned other people’s jobs, so I have a lot more compassion and patience and overall understanding. And it makes me very curious as I like to know what’s going on, I also, because when you’re an indie filmmaker, you end up wearing [chuckles] many hats. Sometimes, when I’m working on a show like this I have to stop myself from doing everyone’s job. [laughs] It’s like: No, no, no. Like I am not continuity or I am not set deck, I can, yeah, you have to respect people’s boundaries and for me, it’s compassion.

Michael Seater: All that stuff, totally! I also started as an actor from a young age, so this feels like simplifying my life in a little way, it feels like, because the last while, I’ve been directing, producing for the most part, and this is the first time in a long time that I’ve done a full series. I think that this is nice, if you don’t wear so many hats. Yeah, I try and bite my tongue as much as possible, which is not all the time…

MS: ..on jumping into beyond just my singular role as actor, but…that wasn’t a clear answer.

MS: But those were the thoughts that went through my head. 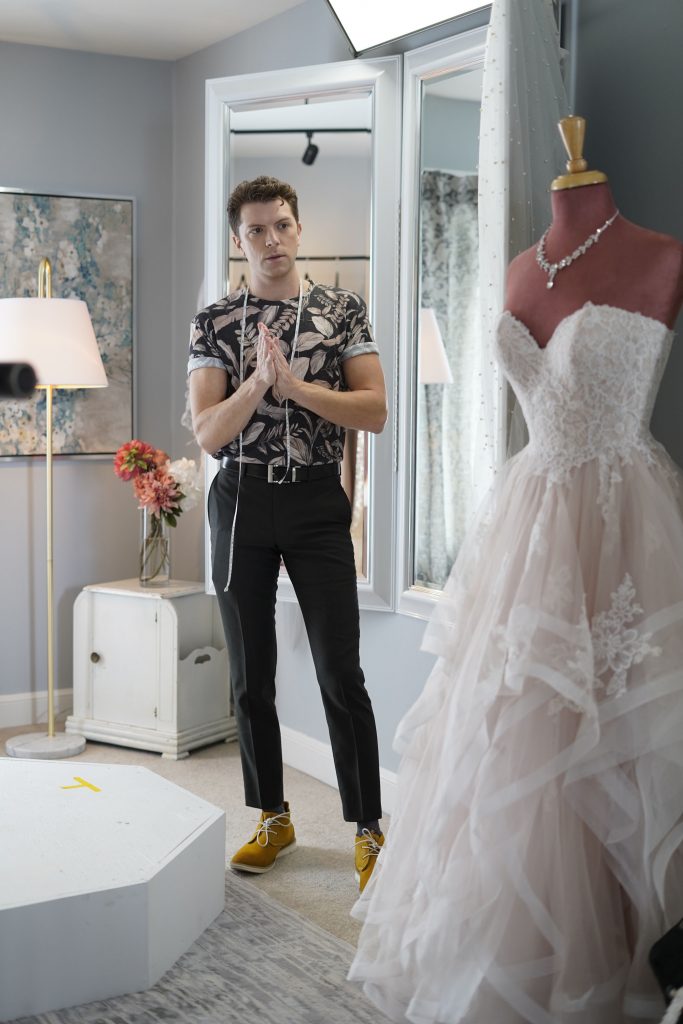 BT: You all had Brain Power Studio connections, but did any of you know each other prior to being a family?

Madeline Leon: Well, funnily enough, I had interviewed Kim, I was doing what you were doing [gestures to me] for EPKs for many Brain Power productions. I had the privilege to interview [gestures to K-SM] this one and that was a few years ago, and then we saw each other on a script read through or something…

ML: Yeah! But Mike and I didn’t know each other.

K-SM: But I knew Michael, because you’ve worked with…

MS: He and I have worked together a bunch. And you [gestures to KS-M] came and rehearsed with us one day, because we’re super comfortable. But that’s really all…we had spent one afternoon together a few years ago, but yeah, knew of each other, more than knew each other, but quick to make a new family.

BT: How did you connect as a family?

MS: It was super easy. I think that from the get-go, it was us yammering in the corner, being like: “[sounds of yammering]”

K-SM: And then they asked me to read for Paige, and I was like: “Oh…I’m way too young to play Paige”. because she’s got kids, I’m in my early 30’s, I have no kids. But also, I’m an actor. [pauses] [laughs] But it’s funny, because in the dynamic, I do feel like the older sister. I do feel like [gestures to ML] you’re my baby sister.

ML: Totally, and that’s so much fun for me because I’m the eldest in my family, I am the opposite in this dynamic, but I come to work and I learn from these two…

ML: And I appreciate that.

ML: I do. I just go to them with my notebook every day and I’m like: “Hey guys, have you got something?”

K-SM: But can I just say: working with Maddie, it’s so refreshing, because this was your first actor credit, in a way.

K-SM: And she comes to set, and she’s so grateful to be here and she’s so excited and curious and talks to everyone and sometimes we get jaded, and it’s like: “Oh, right!” Like remember 10 years ago when you first started and everything was awesome?

K-SM: But it’s such a nice feeling. It’s nice to…it reminds me to slow down and appreciate.

MS: Also, the wisecracking sarcastic one, so much like the one in the show as well.

ML: Yeah, I do find that our characters on the show mimic a lot of our personalities. Would you guys say that?

MS: Well, and I think that so often in a television series, especially something that’s not too high-concept, that is personality-based, the scripts often find their way getting closer to the people playing them and the relationships between those people, because it becomes easier for the writer’s voice of the person you see on set every day, that sort of thing. 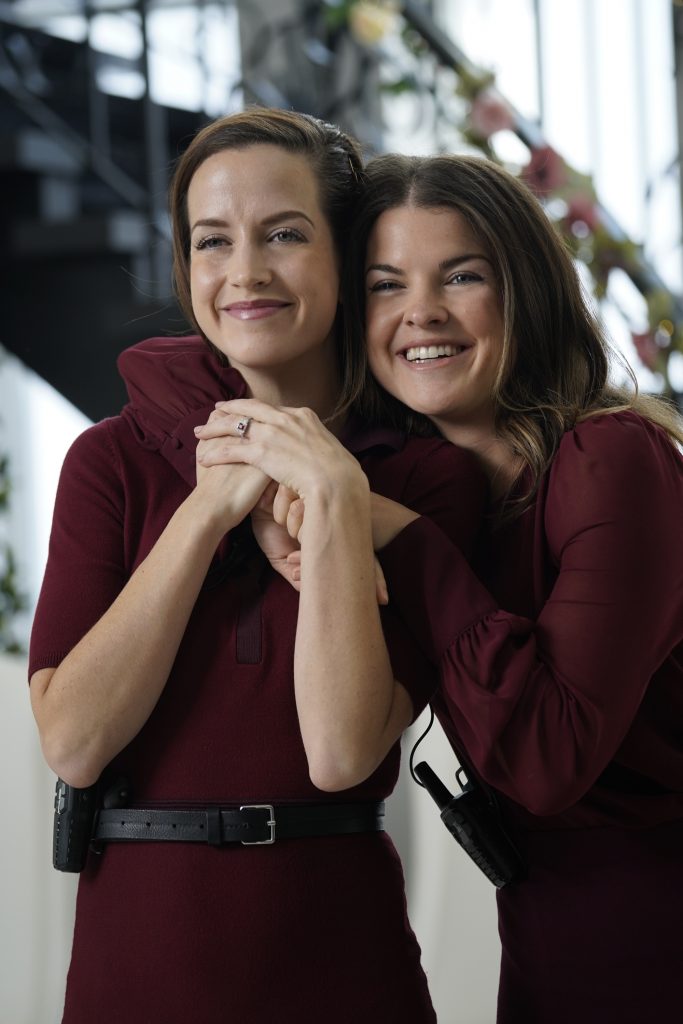 BT: We got to watch one of your scenes being filmed just now.

BT: It feels like a very relaxed style and have you enjoyed that?

K-SM: Yeah! It’s so different. I mean I’ve done a lot of sci-fi stuff in which everything is so far fetched and out of this world and impossible to relate to. It’s definitely easier to come to work and not overthink it and just perform from a place, like literally [claps] just be genuine or really mean it, you don’t have to work extra hard. But in another way sometimes, because they’re every day situations, sometimes it hits too close to home, like the first two episodes were harder because it was all about their mother passing away, but that’s a bit harder because it’s close to home. But I don’t like one genre more than the other, I would say it’s all different challenges.

MS: This production also gives us the freedom to have a naturalistic approach to the dialogue, so that we don’t have to be so rigid on every syllable being exactly as scripted, which I think it quite freeing and does allow us to keep things feeling very grounded and familial with each other, which is quite nice.

ML: Yeah, do you guys remember? It was funny, we were here actually, in these chairs, the very first time we all shot together. And I think this is when we were leaving our mom’s funeral. Was that not the first…

ML: And it was the first, and we had to have this immediate bonding experience of, okay, not only are we family, but we’re also mourning the loss of our Mum and it was…

MS: Yeah. Right off the bat.

BT: What about when you don’t get along with each other, how was that to play?

K-SM: Well, I love drama and I was like: [in a monster voice] “More conflict!!!” But it is sort of a light family drama and it isn’t meant to be like…

MS: It’s not The Handmaid’s Tale!

MS: There’s a lot of fun in the show.

MS: There’s romance, there’s fun, there’s drama and stakes within the family, but if it’s true to life, at the end of the day, families always have each other’s backs, and I think that is often very true and where this show often lands.

BT: We often hear how your cast mates enjoy working with you, Kimberly-Sue.

K-SM: Oh yeah!!! My goodness, the Shadowhunters, that was fun, but so far from this world. It’s funny because they’re such diehard fans and a lot of them will want to see the series. And I’m curious as to how they’re going to respond to it because it’s nothing like Shadowhunters, and Paige is nothing like the Seelie Queen. [laughs]

BT: But it’s amazing to hear that you get along so well with new cast mates.

K-SM: Yeah, when I worked on Shadowhunters with Luke [Baines], it was an instant…like that guy, he’s my brother for life. We have this strong connection and we still talk, and I know that it’s going to be a friendship for life, and so when you do meet cast mates that you get along, and it’s not always the case, such as you work with people that are…

K-SM: Jerkholes. But no, we’re lucky here. And Brain Power is such an amazing company that value family and community, so…yeah.
[youtube https://www.youtube.com/watch?v=BNzNIYzvSKY]