We were thrilled for the opportunity to chat with Abigail Spencer, who has been a dream interview of ours for many years now. Over the course of a really intense conversation about Timeless‘ season finale, but also This Is Where I Leave You, Grey’s Anatomy, and her co-star on Suits (though not the one you may think), Spencer revealed a very different side of herself. The best part was probably when she laughed at the term “Clockblockers”.

Be sure to watch the very moving two-part season finale of Timeless on Global TV and NBC (where it is airing as a two-hour episode) and then the two-part series finale of the exceptional show airing on NBC in the winter.

Here is an edited and condensed version of our delightful phone conversation.

Brief Take: You are such a generous sharer. How much of a role in #Clockblockers and #RenewTimeless do you think that you take on in your social media?

Abigail Spencer: Social media is a funny place, because for me, social media doesn’t make sense, like I don’t really totally understand it on one level, and then there’s the part of me that feels like I also, [pauses], I’m trying to tell the story through my social media and it’s like “okay, what is my story?”. What is this other story that I’m trying to tell through this other portal that can be a place for storytelling and this season we had a lot of underrepresented stories, a lot of women’s stories, and it felt appropriate to just use my platform or anybody that might be checking in with me, as a way to kind of shine a light over here, as an extension for the show. Then it feels like it’s part of my life, also like it’s its own unique thing and one of my favourite things about being on the show is that I get to learn so much about our history. So I feel it’s twofold, I want to learn how to be willing to use social media as a storyteller, because for me, I’m not into selfies or self-promotion, that’s childish, that’s tough for me, that’s definitely not…I’ve had a tough time with social media because I don’t enjoy that aspect, so it’s tremendous for me to find a platform to get behind.

BT: What was it like to play Megan Hunt on Grey’s Anatomy? Did you think about taking over for Bridget Regan?

AS: No, it wasn’t actually. Honestly, that was kind of a weird coincidence, but it’s so funny because Bridget Regan, who is just delightful and wonderful, she just had a scheduling snafu. Basically, she signed on in the last season, and then they moved the Falling Skies schedule and I think it was set up though too, because I was a little worried about it, feeling a little too soapy, because I started out on a soap opera, and the old “dying and someone else comes back to life”. [laughs] What has happened is Bridget is playing her in two dream sequences so it was through the point of view of Kevin McKidd’s character, not in reality and it was in the past too. So I felt like it was enough of, okay, it’s through his point of view, it’s not reality, it’s two dream sequences, and then when Bridget wasn’t available, and honestly, people think that we look alike all the time, they’re like “you should play sisters!” and I’m like “we’re the same person” [laughs] and then my friend Krista Vernoff, she was the showrunner this past season, she was the showrunner on Grey’s Anatomy for seven seasons and came back this year and then the following year. And she called me and said “I know you’ve got six weeks off right now before Timeless, is there any way you could do this, and would you dye your hair red?”. She was like “You kind of look like Bridget Regan”, and I was like “a lot”, and I’ve always wanted to dye my hair red and I was like “Katharine Hepburn was a natural redhead, of course!”. So I didn’t think about that so much as it made sense story wise.

We had such a nice storyline, and it ends with, we were fortunate to have the whole Castle ending, when we got to tell the story the whole episode, and it was so beautifully written. I had the time of my life. I watched the show over the years so the fact that I had like Ellen [Pompeo] and all the doctors standing over me, I was like “23-year-old me’s freaking out right now, everybody, FYI!”. It was such a creative and wonderful set environment, it was such a wonderful director. I hope that I get to play her again. 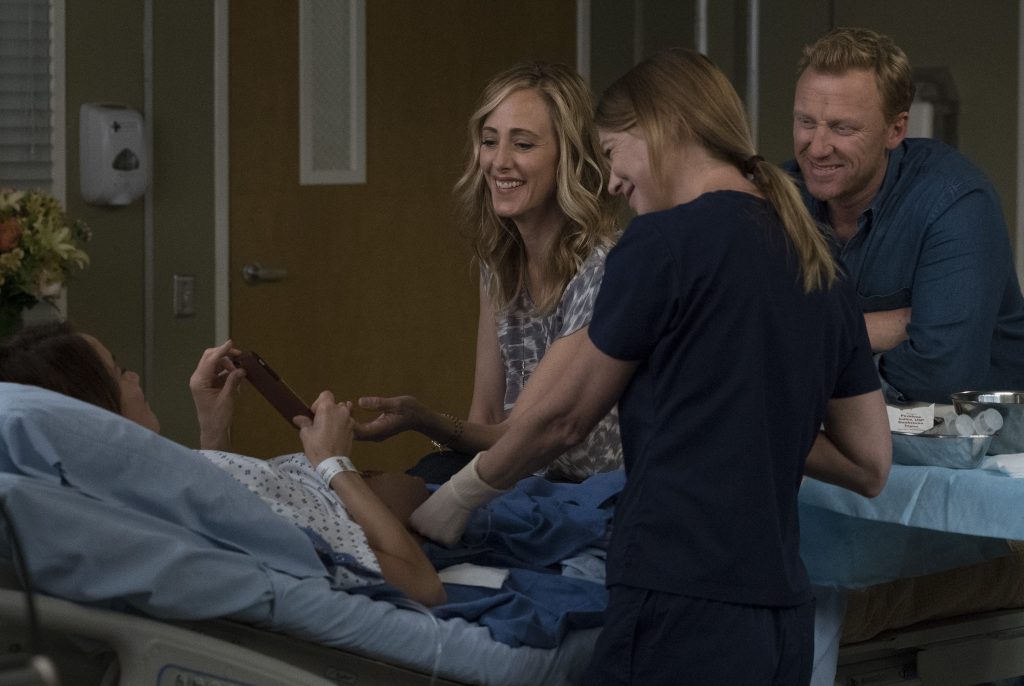 BT: In This is Where I Leave You, which premiered in Toronto, you instill your character Quinn with a measure of empathy even though she’s not the most likeable. How did you go about crafting the character?

AS: Well, I think, and gosh, thank you for noticing, here’s the thing with that movie, I loved that book, so much. And I wanted to be in that movie so badly, and what Shawn Levy and I talked about was this character is doing a lot of bad things, not only in the book to our hero, but also Jason Bateman is America’s sweetheart. [laughs] And also, she’s got to come back again and again in the movie and you must not want to punch her face in because she’s a person and she could be your friend. I think that also you have to maybe even consider that they might get back together, even though he’s falling in love with Rose Byrne’s character. I said “I think the trick for us is to be on her side too, to not make her the villain and to understand her”, that there’s inherent conflict in the film and my greatest concern is that every time I came back, Quinn was going to be written off, and that would not be good storytelling. So Jonathan Tropper and Shawn Levy and I just talked about it at length, that there’s just no love there. There was a scene that was cut out of the film that you could put a little more underneath it, that would have been on her side, and you would have understood her even more, that’s the great thing that they would have gotten into her having a miscarriage and him not being there for her and a little more of her side of the story but regardless of that, I just wanted you to feel her and she made some really bad decisions.

BT: How can we find empathy in our own lives, especially now?

AS: Ironically, I think that it’s the beginning of the conversation, to not be on social media so much. [laughs] It’s hard because that’s also my profession, being on TV and being on social media and being in conversation, but being on it less. My dream is that social media had an opening time and a closing time, like other stores, and I’m like “can’t it just open at ten and close at five”, and I think it’s desensitizing us because we’re so inundated, we’re so inundated,  you can’t feel everything, all the time. So I think that is one place to start, because also it can just get us back to a human connection, and relating back to one another. And then like simple things, like I feel like a lot of my friends feel overwhelmed, like “where do I start, where do I help?”. Also with social media, there’s so many ways to give, financially and time-wise, you just have to pick one or two causes that you really care about, and they don’t have to be the “cause of the moment”, just something that you care about, and you can authentically engage with, and hopefully that’s something that is really personal and you can tell your story with and then you can touch people’s lives.