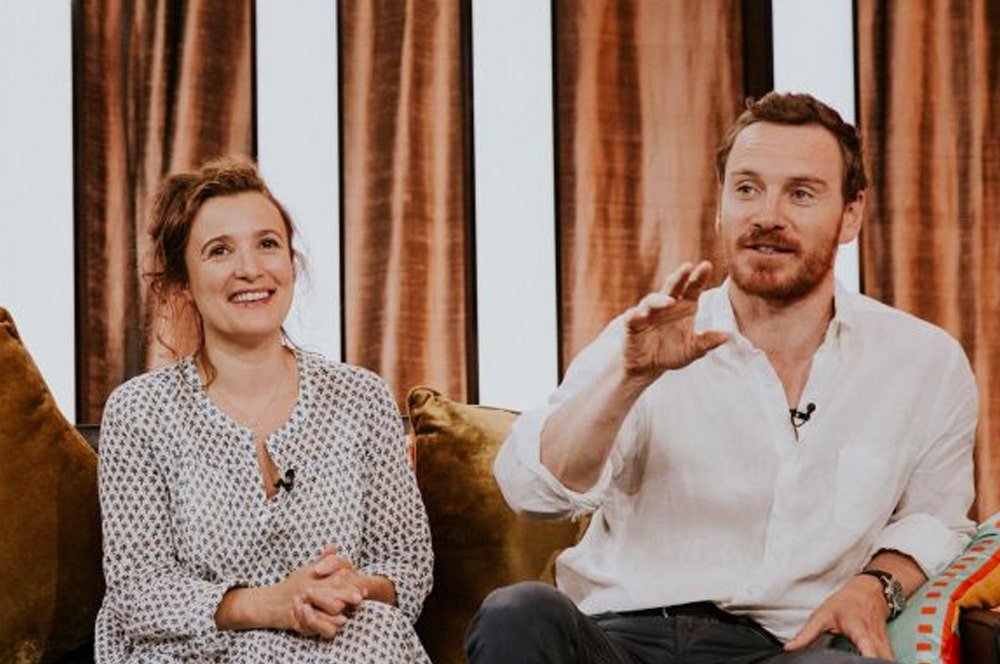 Not to sound hyperbolic, but Michael Fassbender is undeniably one of the most compelling actors working in film. No slouch herself, Lyndsey Marshal is a highly accomplished theatre and film actress who is still receiving accolades from her role as Cleopatra on HBO’s short-lived Rome. Together they play real-life duo Chad and Kelly Cutler, a married couple in crisis in Adam Smith’s memorable film Trespass Against Us.

Prior to the movie’s world premiere at the Toronto International Film Festival, we joined a group of esteemed local journalists to chat with the pair. The following were the conversation highlights.

Michael, at your In Conversation talk the other night you had said that a crew member had approached you, asking why you personally are making this film about pikeys. So now I’m posing the question to you. What drew you to this film?

Michael Fassbender: That, you know the sort of reaction of the community to the travelling community, and vice versa. There could be quite a bit of animosity between these two communities yet they’ve been living in parallel for hundreds of years. It’s funny because in newspapers it still seems to be acceptable to write the term pikey, and it’s quite derogatory for these people. And yet for any other minority group, if something was written that was equivalent, it would be totally unacceptable. So I grew up in Ireland and we have a travelling community there and it was always interesting to see the differences in the community and the conflict that arises between the two communities. So for me, it felt like it was something that I had grown up with and I wanted to be a part of this viewpoint, from the travellers’ point of view of their world and how it is for them to try to co-exist and even to make efforts to sort of integrate. I thought that was an important topic that we need to deal with.

Lyndsey Marshal: We do feel like we have this commitment to do justice to their story. Michael met Chad [Cutler] and I know Kelly [Cutler], the couple who it’s based on, and they’re great people. They’re wonderful people. So you want to do a good job, which I hope we have. They all came to see a screening and they talked through most of it and were howling. They loved it. Certain lines that Kelly would say to Chad, I think they responded to it. I feel very proud of the film. I haven’t seen it for awhile but I feel like it’s a real insight into their world. I went to school with a few kids that were from a settled site and I remember that they were so ostracized and separate. We didn’t really understand why but we were told to stay away from those kids. There’s a real conflict and misunderstanding as well. I just hope the film brings those topics out and creates more of a discussion.

MF: Yeah, you know everything that I do I take seriously. Whether it’s me putting on a purple helmet and a cloak and pretending to move metal objects, you know? We’re in a very privileged position as actors to be working and never to take that position lightly. So I always put all of myself into whatever I’m doing. When you’re playing real-life people and real-life groups of people, we’re representing the travelling community here, there’s a responsibility to get certain things right. Just on a very basic level, the accent was a pain in the ass. I mean all accents are kind of. To try to keep it authentic to these guys, that was hours of work. Just sitting with a tape recorder. I was lucky enough to get someone from the area to record my lines. He’s part of a settled travelling community, and then I just worked on that tape over and over and over again. That’s just sort of the homework and getting ready to go into shooting. Then there was a documentary that they shot about the Johnsons which Alastair [Siddons], the writer of this, was part of. He was living with this family, the Johnsons, for months and months. So the information gathered from that went into the script. So watching the documentary, watching bits of that over and over again, gave me a feel of this world. Then drawing from the experience that I had, knowing a settled traveller family that I was friends with in the village where I grew up in Ireland. Drawing from all those sources really.

Brendan Gleeson plays such a large personality-the patriarch of the clan. What was it like as an actor working opposite someone who’s going so big. Do you pull back a little bit or do you match that?

MF: I think generally you always go by taste and feel. So if somebody is doing something and you want to complement what they’re doing. I didn’t really find that I had to adjust myself because of what he was doing. I had this documentary that I could watch and Chad was there in the documentary so I formed the character around that, and Brendan did the same. I could tell you that he’s been a hero of mine for many years now. I first saw Brendan on stage in Dublin when I was 16 and he made a real impression on me even then. And then he played Michael Collins in a television film and my grandfather was a big Michael Collins fan and believed he was related to him so I remember tape recording for my grandfather. So I always felt this connection with Brendan. Working with him on set was very special for me.

LM: I think he rose to the challenge. If you look at each character’s dialogue, it’s obviously very different, but Brendan’s dialogue was very lyrical. Also he has these huge speeches that are almost plays; very theatrical speeches about the goat and also about giving you a bath and putting you in your pajamas and reading you a bedtime story. Kind of fantastical and I think he just brings an otherworldly element to it.

What was it like working with Adam Smith? A first time director but someone with a wealth of experience in music and television.

LM: As well as it being a massive job for me, because of working with Michael and Brendan, it was nerve wracking and exciting and overwhelming. For Adam, being a first time director of a film like this, it was probably difficult at times. I think we all learned a lot from those experiences. He was pretty brilliant with kids, I have to say, because they’d never done any acting before. He was really patient with them and really meticulous in planning. He was very driven and very detailed and careful with everybody. It couldn’t have been an easy film.

MF: From the first meeting with him and through shooting it, I thought he was very passionate about this story. As Lyndsey said, he was overworking in terms of his preparation. He put a lot of his time and energy into it, as you have to do as a director. But he did it to such an extent that he moved into a hotel in the weeks leading up to shooting. So his commitment level was 110%. Again, coming from a settled community, and a middle class background, he was excited by the way the travelling communities live. It’s very liberating. We all live, and in some ways have been sterilized by, health and safety and PC, but for these guys it just doesn’t exist in their language. So there was that element of delight about it and mischief. With any of these independent, low budget films, you’re up against the clock. You never have enough time in the day to shoot the scenes that you have to do. So absolute credit to him for getting the shots that we had scheduled and then other shots that he’d come up with on the day.

Trespass Against Us is currently available On Demand and in select theaters.