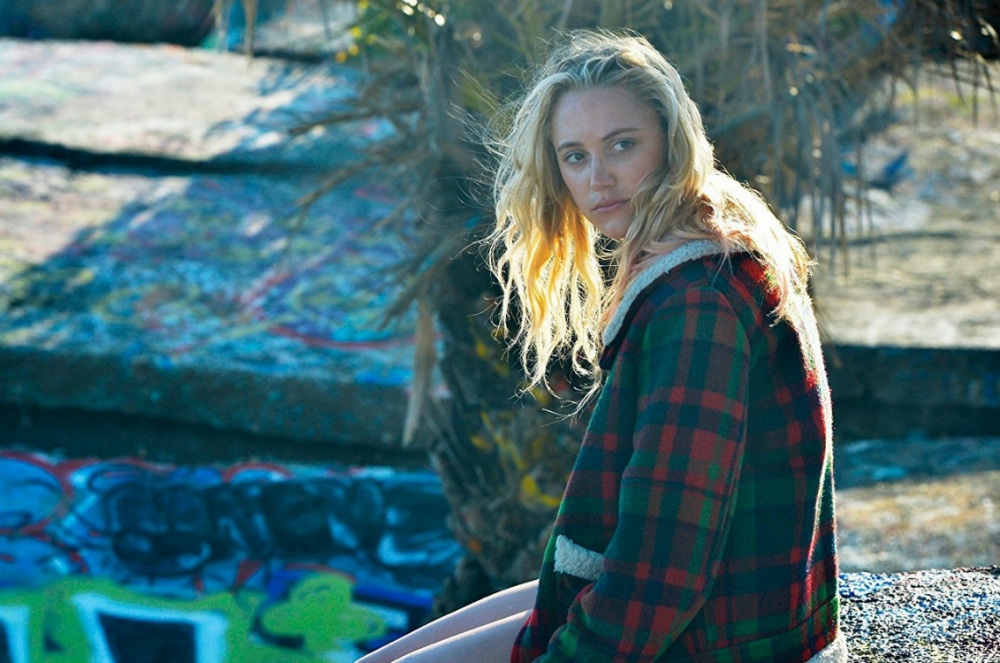 Maika Monroe is the star of the film The Tribes Of Palos Verdes, based on a young adult novel by Joy Nicholson and featuring an awards-worthy turn by Jennifer Garner as her mother. Yet it’s Monroe’s performance as Medina Mason that stands out, as the former kiteboarder goes back into the water after so many years and it’s a very different role for the actress. We’re obviously familiar with Monroe from the one-two punch of It Follows and The Guest, (not to mention the underrated The 5th Wave), but the actress has been putting in some great work since then, and remains a talented name to watch.

Adding to an ever-growing list of riveting performances, Maika Monroe stars in The Scent of Rain and Lightning, which is having its Canadian premiere on April 20th at the Imagine Carlton Cinema in Toronto. It will be her second starring role in a book-to-movie adaptation. The Scent of Rain and Lightning is a slow-burning, poetic thriller in which a young woman strives to find the truth years after her parents were murdered. The film is based on the best-selling novel of the same name by Nancy Pickard.

We spoke with Monroe on the phone from Los Angeles, prior to the L.A. premiere of The Tribes of Palos Verdes. Here’s an edited and condensed version of our conversation.

Brief Take: You were just in Toronto, right? Filming Neil Jordan’s The Widow?

Maika Monroe: Yes. We started shooting in Dublin, Ireland and moved to Toronto to finish filming, then I came back to L.A.

BT: What a nice adventure, with one film.

BT: Let’s talk about The Tribes of Palos Verdes. The film premiered at The Hamptons Film Festival and tonight is the L.A. premiere?

MM: Exactly, yeah. My parents are able to come tonight to the premiere and a lot of family and friends, so that’s quite nice.

BT: How does it feel to be reuniting with your cast mates and thinking back on making the film?

MM: I guess that for this film in particular, we’re playing a family and well, a dysfunctional family at that, but we spent so much time together, not only because many of the scenes involved all four of us, [Monroe, Garner and Justin Kirk as her mother and father, respectively, and Australian Cody Fern as brother Jim], and it’s a small indie film and we don’t really have trailers. So we’re all hanging out on set and using each other’s bathrooms as changing rooms, and really spending a lot of time together. We really bonded through that whole experience, so seeing everyone again is really nice. We all continue on doing our thing and continuing our own lives, but being brought back together is always a nice thing about doing it.

BT: Jennifer Garner is an executive producer as well as an actress and she gives such a powerful performance.

MM: Oh yeah. Jen is incredible and just a really special actor with whom to work.

Brief Take: As she played your mother, did she impart any wisdom on you?

BT: For this film, you get to go back in the water, obviously, pools, but surfing, I imagine that kiteboarding is a lot more difficult than surfing?

BT: And you did your own surfing in the film, correct?

MM: Yes! Most of it. There’s a few scenes with an awesome stunt double from Brazil that actually came in and did some of the wide shots with the bigger surf.

For me, growing up, the ocean has been such a peaceful place where I’m not thinking about what happened that day, or what’s happening with my family and my friends, I’m really in the moment. Whether you’re paying attention to the wind or the waves or whatever it is, it’s definitely what I would consider to be a safe and peaceful thing.

BT: Would you find your hometown of Santa Barbara to be similar to Palos Verdes?

MM: Yes, definitely has its similarities. They’re both very wealthy towns, very beautiful, there’s a regulation on building in both, and everything has to be Spanish-style. Definitely some similarities in my upbringing and going to high school there. When I read the script, it felt really accomplished and it portrayed the location really well.

BT: What can we look forward to seeing you in after The Tribes of Palos Verdes?

MM: The first is a really small indie called Shotgun, with Jeremy Allen White from Shameless, which was really fun. Kind of a dark, romantic comedy. Shot that in New York, should be out beginning of next year. Then Neil Jordan’s The Widow, that you mentioned, which I shot with Isabelle Huppert and Chloë Grace Moretz. They’re both very different, but I’m excited for both of them. I hope that people enjoy them!

The Tribes of Palos Verdes is available on VOD and iTunes on April 10. To win a digital copy, enter here!