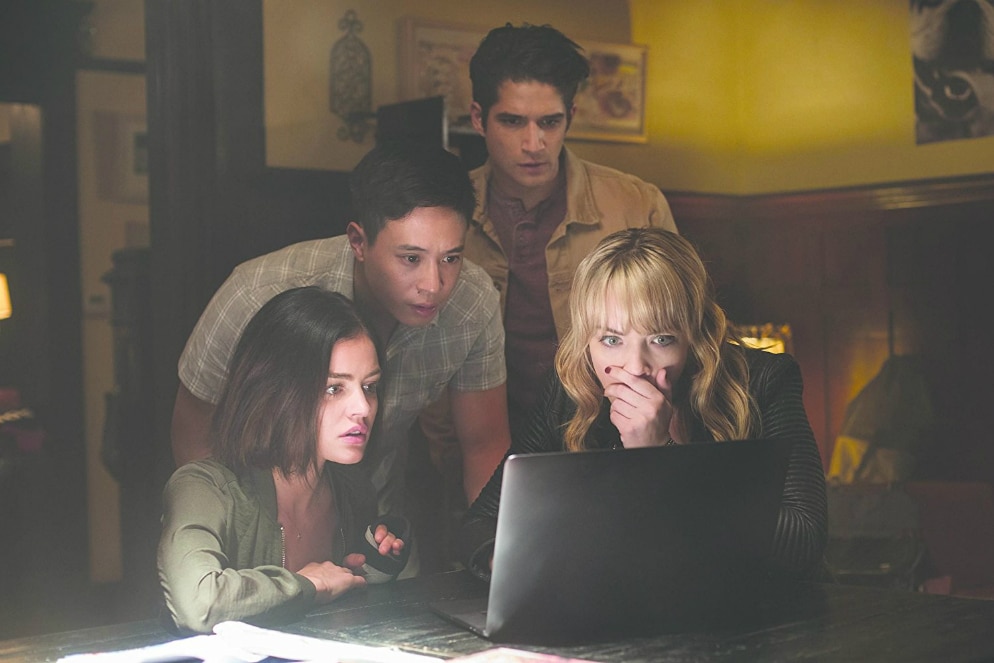 The talented Hayden Szeto appears in Blumhouse’s Truth or Dare, which is another very exciting instalment for the production house. Alongside Szeto, the film stars Tyler Posey, Lucy Hale and Violett Beane, though Szeto appeals to us especially as he is Canadian (born in Vancouver and living in Los Angeles). The charming actor made an incredible impact on us as Erwin Kim in the criminally underrated gem The Edge of Seventeen.

We spoke to Hayden Szeto by phone from L.A., where he had just eaten lunch and then (adorkably) spilled a whole bunch of bubbly water all over his table. Szeto was a blast to chat with! He opened up about a few of his upcoming exciting projects and shared with Brief Take how one film in particular changed his life forever.

The following is a condensed and edited version of our interview.

Brief Take: What was your experience like shooting Blumhouse’s Truth or Dare?

Hayden Szeto: Blumhouse’s Truth or Dare, oh my goodness, that was a fun movie to shoot! I felt like we were in full sprint the whole time, it was so action-packed. [Co-star] Lucy Hale was filming Life Sentence, the CW show, in Vancouver and she was asking me for recommendations for places to eat and things to do.  So I asked her what she likes to do and she was like, “oh, I like hiking”, and I was like, “alright, here’s a couple of hikes that you should do. I highly recommend the Grouse Grind”. It’s a vertical hike and it’s a straight line that gets steeper and steeper as you go up. She’s super fit and super physical so she was up for the challenge, and she went and I asked her to beat my time, which was forty-minutes flat, back in the day when I used to sprint up. She was very close! She didn’t quite beat me, but she was very close. For a first-timer I was very impressed!

HS: Summer Night, oh that was awesome. I got to play a musician in that, and I’ve always wanted to play the guitar, so I play a bassist for a band called Rainin’ Rivers in the film. Summer Night takes place over one day, it’s kind of like Dazed and Confused, it’s about these musicians who live in Chico, California. It’s a day in their lives, falling in and out of love, and it culminates in them deciding what to do with their lives, and it’s really beautiful. It made me feel things, man. I can’t wait for people to see it. The food was on point too. *laughs* The cheese grits with shrimp? Oh man. I’d never tried them before and they were amazing!

BT: Lodge 49 is another exciting project of yours that’s coming out soon. What can you tell us about the tv series?

HS: It centres around Doug and Liz, a brother and sister who begin the series by coping with the death of their father. One finds a dead-end job and one decides to join a fraternity. I play a character named Eugene “Corporate” Marr. They just call him Corporate. He takes a liking to Liz, as they work in the same place and I give her a different perspective on life. A lot of people think it sounds like the older version of Erwin and Nadine [from The Edge of Seventeen], which I kind of think it is and it’s executive produced by Paul Giamatti, who I’m a big fan of.

BT: What can you tell about working on the tv movie What We Do in the Shadows?

HS: There are vampires in it, and Taika Waititi is directing it and it’s similar to the movie, the mockumentary. A lot of it is improvised and Taika is awesome, and Jemaine Clement…they are amazing people! I’m a big fan of Flight of the Conchords and so being able to work with my heroes, it was tough not to be able to geek out constantly. When Taika was telling me what to do, I was like, “Oh my God, I love you”. When Jemaine starts talking, I start laughing, because he’s so naturally funny. You know when there are those people when they walk in and say hello and you start laughing? He’s like that kind of person, you just start to giggle. They’re just standing there thinking about things, they’re so funny. I felt like we were all children, we were like kids in the sandbox on set. There was so much improvisation, but Taika and Jemaine are so encouraging, they like your ideas. The scenes are just a road map for where we want to get to, but he’ll let us riff with each other constantly and somehow end up shooting this in three weeks. It’s insane, the amount of material that they had. Taika always likes to say he films way more than he needs, so that explains his genius and why his films do so well, because he just really takes his time and knows what he wants.

BT: What stays with you most about The Edge of Seventeen?

HS: At the time when I was working on it, I remember my Grandma used to be my biggest fan, used to because she passed away, unfortunately. She used to to always have my headshots up in the hospital next to her bed. She would watch my demo reel, back when I had nothing. She’d always call me “Superstar”. It was really touching. When I booked The Edge of Seventeen, she had just passed, and I remember being on set and not being able to function. I had to shoot my scene with Haley Lu Richardson where I had to be funny and charming and I remember just not being able to get there, because of my mental state. James L. Brooks and Kelly Fremon Craig pulled me aside and asked me “what’s up”, and I told them I was going through all these things. I remember I really bonded with Kelly and Jim in that moment because Kelly told me “hey, this is my first film too. I’m freaking out too. It’s fine, it’s okay”.

Jim had an iPad and he said, “Hayden, I want to show you something”, and when he said that I was so nervous, and he showed me my audition tape for The Edge of Seventeen and he’s like, “this is who you are, and we need to get this guy back”. He said “You should bring this guy to every single project that you do”. For James L. Brooks to say that to my face, that was the biggest moment in my career for me. The Edge of Seventeen means so much to me. Since then, so many Asian-Americans kids reach out to me on Instagram and Twitter about how much that helped their self-confidence and their perception of themselves. It was very special. That makes my life already, just for doing that.