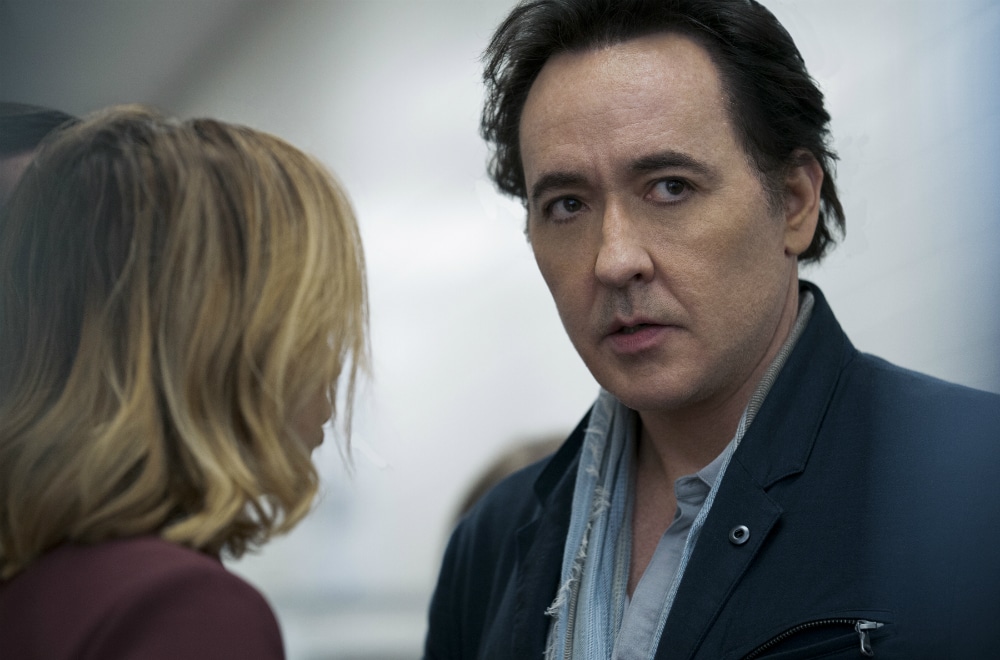 One of the most beloved actors in the world (and an actor with one of the most diverse range in roles) is John Cusack. His latest performance, as the steely, ambitious, and evil Doctor Kevin Christie in Amazon Prime Video’s Utopia, is unforgettable, especially as his storyline has direct correlation to the global pandemic we’re currently experiencing. During the recent press junket for the series, we had the wonderful opportunity to chat with the acclaimed actor-activist and the following is a condensed version of that scintillating conversation.

Brief Take: Hi, John! I’m curious as to your take on your character Dr. Kevin Christie?

John Cusack: Dr. Christie is a billionaire philanthropist, scientist, virologist, so I think he’s somebody who wakes up every day believing he can make the world a better place through science. The series opens up and he’s trying to create a lab -grown food where it can be a plant-based food that can be made in the lab so you don’t have to use land or water, so he thinks he has a world changing revolutionary science. It happens that the food that he’s created, there’s some suspicion that it could be a part of a virus, so that’s how he enters the story. But I think he’s a character who wakes up every day trying to do what he can to change the world to make a sustainable, green, liveable planet.

In the show, your character is always asking people ‘What did you do to earn your place in this crowded world?’, so I’m curious if you’ve ever pondered that question yourself? Also why did you choose this project as your first foray into television?

JC: That question that he poses, I think a lot of people think of it every day when they think about social justice and where the world is moving towards and how the world ideologies of capitalism and communism have ended up doing the exact same things in the end – which is ripping out the bowels of the Earth and making the planet unsustainable. So I think those larger questions are asked by a lot of people trying to figure out how to be moral in a very complicated world. It’s a provocative question that a lot of people think about a lot.

To answer the second part, I hadn’t really been offered anything that I thought was good or that I wanted to do, and this was the first one that came along that had a great writer and was a perfect part so it was an easy no-brainer for me. Gillian (Flynn) sent me all eight episodes and I started reading them and it was a real page turner. I think I read the entire eight episodes in one day because I wanted to see what would happen next. It was very surprising and terrific writing so it was nice to be asked by her to do it. 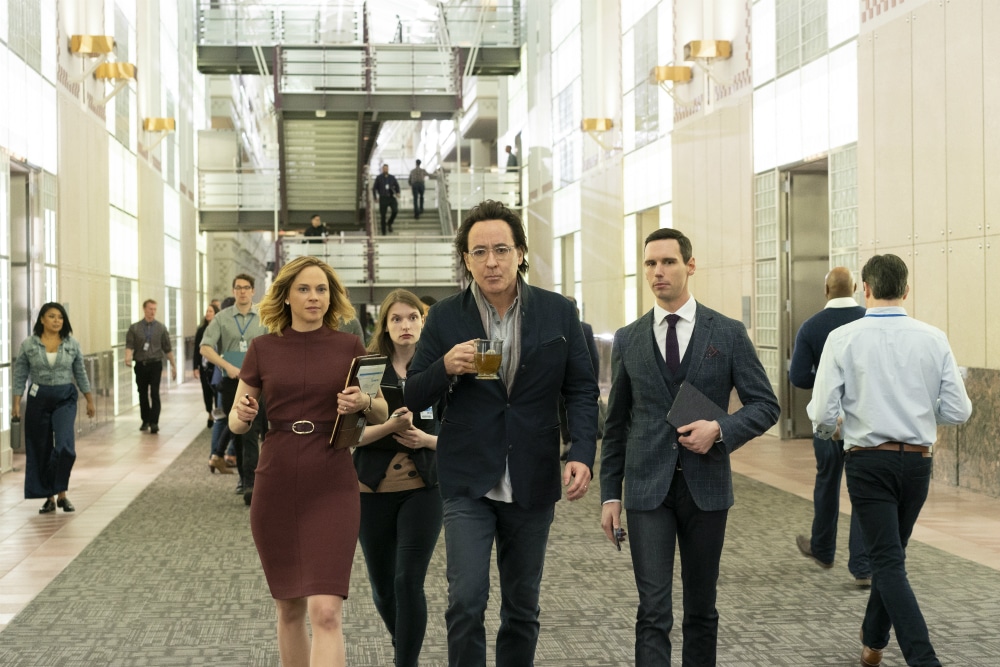 How do you feel about the show coming out now, at a time when it eerily mirrors the current world events?

JC: It certainly hits close to the bone, the currency of it. All the dystopic themes of global warming, migration, and climate change and endless wars, those themes are not new, they’re ultra modern themes that people are grappling with and have been for years. But the actual pandemic hadn’t happened, so that was a bit shocking. Yet the themes are nothing new to sci-fi writers and people who are thinking about the future. There are a lot of dystopian themed projects that have dominated the landscape of books and film and tv for the last fifteen or twenty years.

Conspiracy theorists have become more vocal and mainstream recently, which is also addressed in the show. How do you feel about that and about what they may potentially do to society as well?

JC: It’s a bit different. If you look at some old films like The Parallax View, they have more to do with top down government or industrial espionage secrets that are at the very top of the capital stacks, the money chains. What we have now is I think a lot of the social media companies, that are really data mining companies masquerading as social media companies, that are feeding algorithms that exploit people’s fears and prejudices, and in that sense, I think that’s the greatest danger of all, which is the profiting off of the worst instincts in human beings and the worst fears. So I think you have to say that Facebook and a lot of these platforms really have to be held to account for their role in spreading disinformation. And obviously we have the current occupant of the White House who lies as easily as he breathes. There’s a wonderful fact checker named Daniel Dale who is a journalist who went on CNN last night, and he was asked “what did you think of his Town Hall?”, and he took a breath and then for three minutes he went over Trump’s lies, and then he said “and that’s just the surface”. “That’s just off the top of my head. But since he spoke for two hours, I have probably another hour of lies to go over.” So we have a frightening situation in the United States right now where there’s a lot of profiting off of misinformation and fear mongering and hate. Not only is poetry being replaced by algorithms but the actual idea of facts is being attacked by these same algorithmic, profit driven companies. That’s an honest answer to your question. 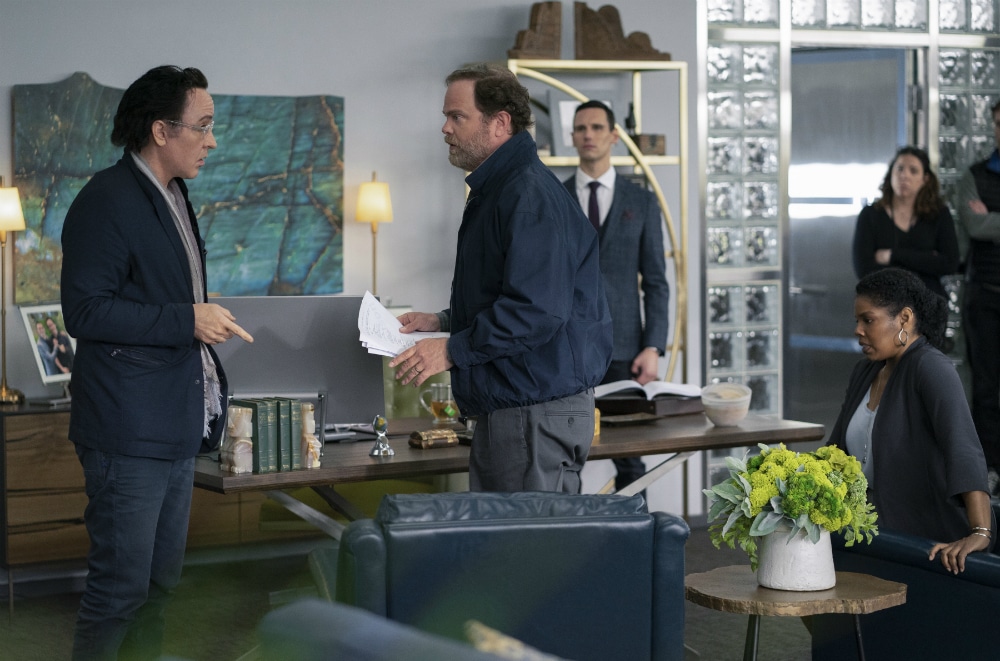 In addition to being an actor, you’re also someone who’s known for speaking frankly on social media. How do your personal beliefs affect the projects that you choose to act in or do they not go hand in hand?

JC: I think they do. If you can get your own projects made, then you can express yourself in that way, and at other times you hope that you’re collaborating with good people. Sometimes you’re just trying to get a job and take whatever kind of job you can get. So it all depends. Then sometimes you’ll do a movie that you think will make money and you can leverage that to make a smaller project that you care about, so it’s a bit of a dance. But doing Utopia was a very easy decision because the writing of Gillian Flynn was so sophisticated and fun and dark and dangerous; it was a lot of the things that I like. So I always factor in that part of it as best I can.