Spencer Locke is one of the kindest and sweetest interviews that we’ve had recently. We will be seeing a lot of different sides to this performer in the Netflix movie inspired by true events, Walk. Ride. Rodeo., in which Locke plays real-life barrel racer Amberley Snyder. Speaking to Locke was an absolute treat, as the combination of her Southern accent (she’s originally from Florida and mentions how many of her good friends also happen to be from Fla.), frequent giggles, and overall friendly attitude makes for a captivating and interesting conversation partner.

The following is a condensed and edited version of our interview with the charming and effervescent Spencer Locke.

Brief Take: I can’t wait for viewers to see your remarkable portrayal of Amberley.

Spencer Locke: As soon as I read the script, or even heard of Amberley and her story, I just instantly fell in love with her. It’s so wonderful that it’s getting such a massive platform via Netflix. Everybody’s heart is invested and in the right place and wanting to inspire as many people as they can.

BT: Had you heard about Amberley Snyder before you were involved with the movie?

SL: No, I had never heard of her, but I got the audition, so I instantly did all my homework. I was just amazed by her ability to make the most of her situation and with how vocal she is spreading her message of overcoming obstacles and making the most of whatever life gives you. And her presence online is amazing and her heart is huge and I fell absolutely head over heels in love with the story. I was beyond blessed and honoured, and what a responsibility it was to portray her. Then when I got the role, Conor Allyn, the director, and I flew to Utah to spend a few days with her and get to ride and really get to know each other the best we could. So we’re bonded for life—she’s my hero. [laughs]

The most surreal night of my life alongside @amberleysnyder ❤️ thank you @netflix! #walkriderodeo premieres THIS FRIDAY!!

BT: Did you have any riding experience prior to working on the film?

SL: So I was honest in the audition. I said that I’ve been on horses, like family trail rides, but that’s pretty much the extent of it. I had a bit of a rodeo boot camp in Utah with Amberley and then the horse trainers—man, I was with them every weekend when we were shooting, and I just fell in love with riding. I did get really good by the end of the shoot! [laughs] But I definitely plan on keeping it up.

BT: Even though you haven’t worked with anyone in this cast, it seems like you have natural chemistry with them.

SL: Thank you! Missi Pyle—she’s a dream. She is such a powerhouse. I don’t know if I’ve ever worked with such a generous actor in my life. I mean every scene with her was completely elevated. She’s incredible, and then to dive so deep into such an emotional story, it was wonderful to have someone who in between takes is making jokes and lightening up the whole mood. I mean she’s just…I can’t say enough good things about Missi. We even got matching tattoos, so there’s that. We had to! We were just so touched by the whole experience. Corbin Bleu is amazing, Max (Ehrich)—have you heard his song that was released today? Isn’t it beautiful?! He’s amazing. Bailey (Chase), whoa [sighs] he kills it. Sherri (Shepherd), she’s amazing. I think that everyone did such a great job. 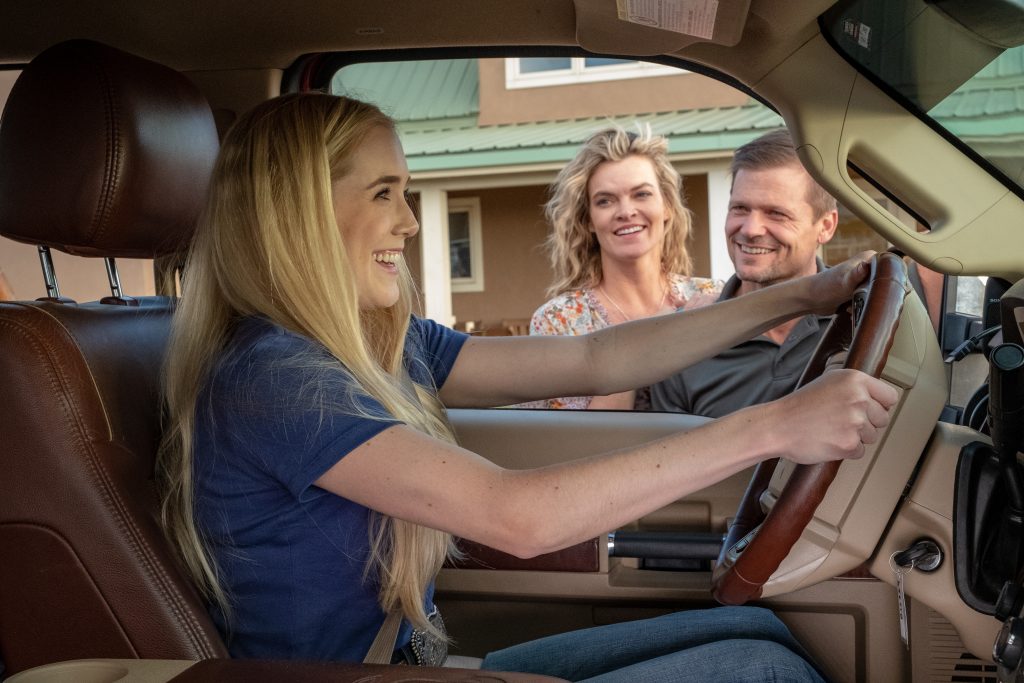 BT: Playing a real person who is right there is a blessing but also a little intimidating, I imagine.

SL: Oh absolutely. Because I think I made it clear to her, she was my priority throughout. It’s uncomfortable, I mean, how bizarre is it for her, and it’s a strange situation. But I quickly realized that I could either choose to be intimidated and self-conscious in this or run to her. [laughs] So I just ran to her in-between takes, and days when she wasn’t there I wanted to FaceTime with her, and just make sure, do everything I could to keep it as accurate as possible for her. And there’s so much physicality involved as well and riding, so there really was a lot to it and she was involved in every way.

BT: There are some darker moments within the film as well.

SL: Yeah, yeah, oh yeah. There’s a lot more to it that people will see in the film. I think that because I fell so in love with Amberley, I am so grateful that she was so open with me, her and her family. Her mom was on set pretty much every day as well and they were so open with all of the ugly moments. You don’t have the glory without the struggle and I think that the film beautifully portrays both—both the trauma went through by Amberley and having to rise above it. Which is the point of the film—to inspire people to take a look at, you know, everybody’s got their battle that they’re fighting. But to be able to look at that and to choose to overcome whatever is thrown at you, that’s the beauty of it, you know?

BT: What do you think the response will be like to the movie?

SL: I can’t wait for that day! I’m dying to hear from people. I want to hear how they’re overcoming their struggles, and that’s the beautiful thing about the world in which we live—you can be connected. I have no idea of what to expect, honestly. So far this has been, even in the past few weeks, a bit of a whirlwind of excitement, and yeah, I’m just looking forward to it. I have no idea what to expect but I imagine that it’s going to be very moving.

BT: Something really seems to be special in the roles that you are choosing.

SL: It’s so funny that you say that because it was just this morning, you know, we had the premiere last night, and just reflecting on it all I found myself writing that this movie changed my life. I realized that this isn’t the first movie which I’ve said that about but I’m very grateful to look back and recognize that as well. I believe that everything does happen for a reason and that you will find the right path, and it’s neat to look back and see that that’s kind of been the case.

BT: A lot of people, not even horse people necessarily, are going to embrace this movie.

SL: Yes, it’s so true! I think that genuinely comes down to the fact that people are craving a movie like this. You know, a movie that they can watch with their kids, or not, and I think that everyone will genuinely take something from it. I know telling the story, absolutely like I said changed my life—my perspective, my daily gratitude, you know. And if everybody takes a little something from it, that’s the biggest hope and blessing. But yeah, you’re right, it’s not just a sports movie, it’s not just a romantic movie, it’s not just a family movie, it’s really all in one. Thank you for recognizing that! That is so true! BT: You have a chance now to show your range and not be typecast as a Scream Queen.

SL: Thank you! Yes, I am, I am thrilled about that certainly, because I love horror and I am very grateful to have had so many fun roles in that genre, but yeah, this was a challenge in so many other ways. It was just a gift — a stretch and a gift. I was very grateful for that opportunity. I can’t help but hope that people will see this and are able to see me in a different light, and perhaps take me a little more seriously. You know I started as a child doing this, so people do love to put you in a box every now and then or a certain category or type. So I’m hopeful that I’ll be able to break out of that, I’m hopeful. Time will tell, right? [laughs]

BT: For a viewer that says “I want to know more about Spencer after seeing this movie”, what would you tell them?

SL: I think that I might have to bring it back to what you said of “I’ve been doing this a long time”. We live in such an instant gratification world and you can look at someone online or whatever they’ve got going on right now and then it seems just like “oh!” instant and all very glamorous and rewarding and all that. But I’ve gone years where I’ve even doubted if this was meant for me. I started at 11 years old, and I mean it’s always been my number one passion, but it breaks you down, you know? So I’m grateful that I had my family to always pick me back up and keep me down-to-earth, and with a little bit of tunnel vision of “this is what I love to do”. I’m grateful and I had my moments, but I never gave up. So I think I want people to know that it’s a roller coaster, for everybody, and to always remember that—when you see the highs and the lows, that it takes a lot of hard work and a lot of time and patience, that this stuff doesn’t happen overnight. That’s kind of the message of the movie too, of not giving up of what you know is in your heart that you want to do, and when it’s ugly, even when you doubt yourself, to really stay true to yourself and keep going. I guess that’s what I would want to put out there. [giggles]