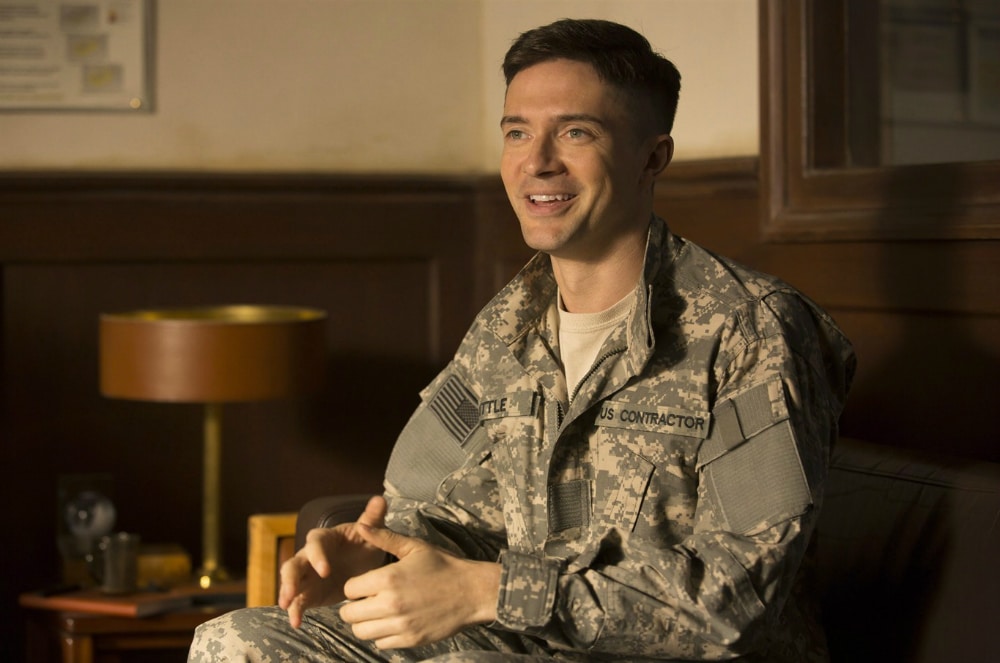 Netflix is on a roll this month with its top-notch original programming! Literally every weekend this month has seen the timed release of a different show, beginning with Master of None‘s critically acclaimed second season to this weekend’s release of the final season of Bloodline. This weekend also brings the release of the Brad Pitt-produced and starring Netflix Original film, War Machine. Based on Michael Hastings’ book The Operators, but altering names and slight details, the film documents the Stanley McChrystal fiasco, from the Army General’s perspective. Boasting an impressive ensemble cast that includes Lakeith Stanfield (Get Out), Meg Tilly, John Magaro (The Big Short) Alan Ruck and Topher Grace, it’s a cheeky take on the war in Afghanistan.

Last week we had the opportunity to sit down with the hilarious Topher Grace (of That ’70s Show fame), who plays idiot savant publicist Matt Little in the film. The following is an excerpt of that roundtable discussion.

As an actor, you’ve had a lot of experience over the years dealing with publicists. How did those experiences shape your portrayal of one in War Machine?

Topher Grace: I keep having to answer similar questions in front of publicists on this press tour and I play a terrible publicist in the movie. I mean yeah, that guy blew it. Even the narrator says, “I don’t know why these guys granted me access”. It might be weird if that scenario didn’t happen exactly the way it did. But that’s what actually happened! Even when I read about it the first time, in 2008 or something, I was like, “How did this happen?! Rolling Stone?!”, but you know, the truth is stranger than fiction. In terms of preparation, I was at the military boot camp with the guys for three weeks. On the first day I popped my collar because I thought it looked cool…you know my character is moussing his hair and whatever. And the military advisor goes, “No, no, no, no, no, we don’t do that in the military”. And then the director goes, “No, no, no, he should do that! He has no clue what he’s doing”. *laughs*

TG: I’d only done one film, and then Soderbergh, who had done Traffic, was like, “Do you want to come and do a couple days with George Clooney and Brad Pitt?”. And I said, “Well let me check my calendar”. *laughs* I’d only been in Hollywood for two and a half years or something at that time.  And there I am a 19 or 20 year-old kid, and he came into my makeup trailer and said, “I just wanted to introduce myself – I’m Brad”. *laughs* And Clooney was like that too on that day, which was great because I was so nervous. I hadn’t met that many celebrities, you know? These guys who are titans of this industry, they have this way of making you feel very comfortable very quickly, so your best work gets on camera too. The only difference now is that Brad has become one of the biggest producers in Hollywood. Moonlight, The Big Short, 12 Years A Slave…none of those would exist if it weren’t for his company. He really takes care of everyone on set. And it was really a master class in acting on set too. When I was watching him perfect the character I thought, “this isn’t a coincidence. He didn’t just happen to be in a bunch of great films”, you know? The guy is just really brilliant and also very generous too. He’s a great leader but he also led by example.

Are there any other actors or directors that you still aspire to work with?

TG: Oh man, La La Land blew my mind. I remember just watching that first scene on the highway, thinking, “that is more effort than most people put into an entire film, and I haven’t even met the two lead characters yet”. I think everyone has an appreciation for it but even more so people that are in the industry. I loved Singin’ in the Rain when I was growing up so La La Land really hit that spot for me. And Harrison Ford would be the one actor I’d love to work with. I think he’s great. I’d also really love to work with Lakeith [Stanfield], who I was in this film with but we just didn’t have any scenes together. I’m a big fan of his.

How do you feel about Netflix and having the film being released on the streaming service?

TG: It’s great! In a lot of these interviews I’ve been talking about Brad and how he’s a huge star to be on Netflix. I just love the movie so much and I don’t know if it would have been made at a studio. I’m just so glad I got to be in it. I’m just so grateful that technology is going in a way that someone had the money to pay for this. For actors it’s a really exciting time.

Which films or television shows are you streaming right now?

TG: Elisabeth Moss, who was in Truth with me, is on The Handmaid’s Tale, and she’s so unbelievably good in it. I’m watching that and it’s better than any movie I’ve seen recently. That’s an Academy Award-worthy performance. And what Reed Morano is doing is such great filmmaking. I’m also watching Westworld, Stranger Things, 11/22/63…it’s not just the golden age of television right now-it’s the platinum age. It’s a great time for actors.

War Machine begins streaming on Netflix Canada on May 26th