written by Charles Trapunski May 6, 2019 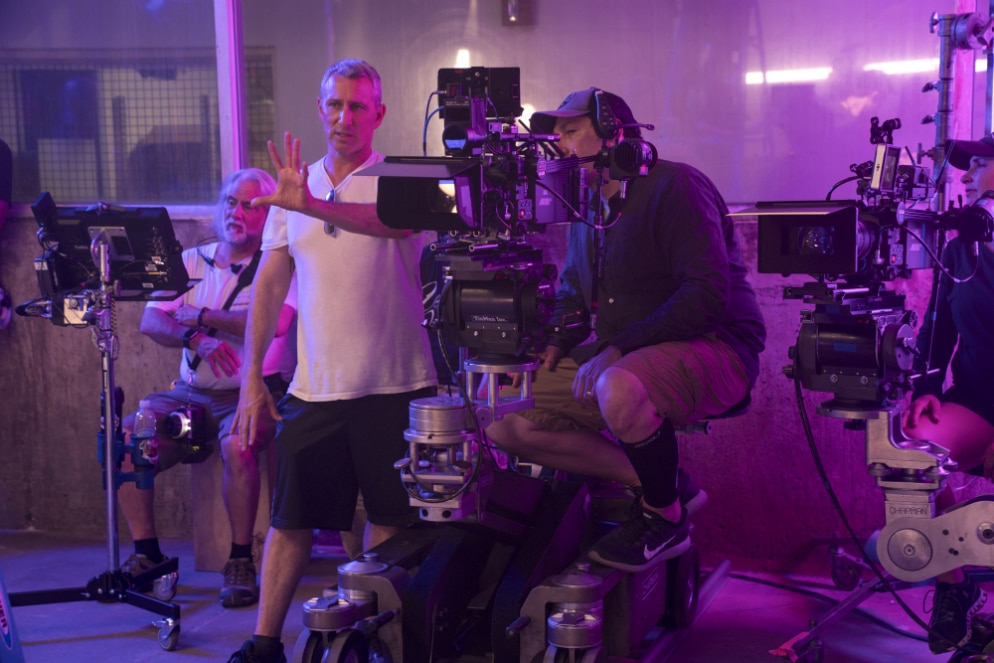 It’s always a pleasure to talk to genuinely nice people (especially in today’s day and age), which was the case when we had the chance to speak with the director of the hilarious and timely new film What Men Want, Adam Shankman. Though he managed to kindly brush off compliments about the people that he has inspired and mentored, it’s clear that talent are eager to work with Shankman because he brings out the best in them.

The following is a condensed and edited version of our phone interview with director-producer-author-choreographer Adam Shankman.

Brief Take: Congratulations on the film and hello from Toronto! You’ve filmed a few of your films here. What did you enjoy most about shooting in Toronto?

Adam Shankman: I really loved shooting in Toronto for Hairspray. It was incredibly accommodating. We rehearsed in the summer and then we shot in the winter. I went through a full year of filming in Toronto for Hairspray. I think my favourite thing filming in Toronto was when we shot Cheaper by the Dozen 2 up in Cottage Country, and I don’t remember which lake we were on (Stoney Lake), but I loved shooting there. I went to work every day on a Sea-Doo and a Jet Ski and that was amazing. It was wonderful!

BT: Tell me about shooting in Atlanta for What Men Want.

AS: Well I’ve been spending a lot of time in Atlanta, like Atlanta is the new Toronto. I’m doing a TV series for YouTube Premium, Step Up: High Water, so we’re shooting in Atlanta there, I worked on some TV there, and then I ended up doing What Men Want there, so I feel very at home in Atlanta—Atlanta is very warm and embracing. The film community is so alive and thriving there. It has very sparkly locations and it has very ‘underbelly of the city’ locations. And it’s very verdant and green, you know it has a lot to offer as a place to shoot. It’s a giant backlot [laughs], which is what it feels like sometimes. I mean, it’s not quite Vancouver, where something is shooting on every corner, but it’s just so film-friendly. And Atlanta, when I told everybody that I wanted to shoot there, they said “Atlanta, for what city?” and I said “for Atlanta”, let’s just make it be in Atlanta. It has this huge sports community, it’s totally metropolitan—there’s no reason that we shouldn’t shoot there. And then I wouldn’t have to worry about dressing something up to be something that it’s not, and everybody looked around and said “Great! Sounds good to us”. I mean, Will Packer lives there, so he couldn’t be happier. 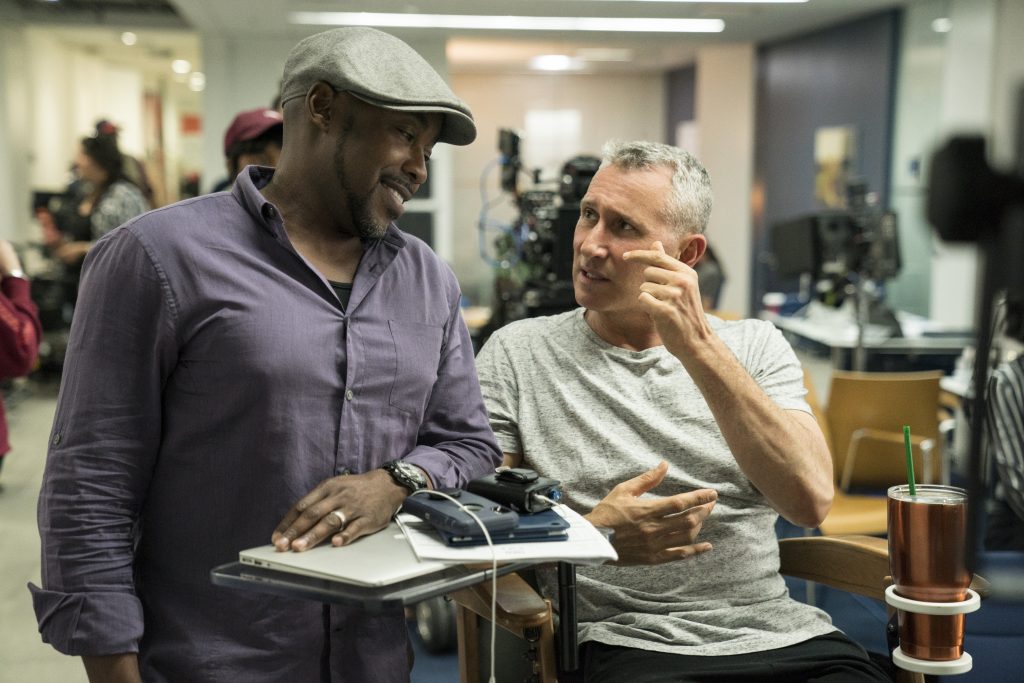 BT: Did you really film the NBA Draft at the Barclays Center?

AS: On site I shot the NBA Draft. Half of it I was shooting during commercials and when I had (NBA Commissioner) Adam Silver, I was trying to run him out to talk with the right rapport. Before the crowd got there we had to shoot the scenes with Jamal (Shane Paul McGhie), and it was nuts. There was so much security and so much intensity around this, but the NBA made the whole experience so wonderful. I owe so much to the NBA and particularly the Atlanta Hawks. (Owners) Tony Ressler and Jami Gertz were incredibly accommodating and the NBA was really heroic for us.

BT: Which athlete was the most natural and surprising thespian?

AS: I guess Lisa Leslie and Karl-Anthony Towns were – they ended up having the most to do. I mean, other than Shaq, Shaq acts all the time so… Grant Hill was just tickled by the whole thing, he couldn’t be a sweeter and cooler guy. I loved Mark Cuban being there, but Lisa had a lot to do and Karl-Anthony had a lot to do, but they were great! 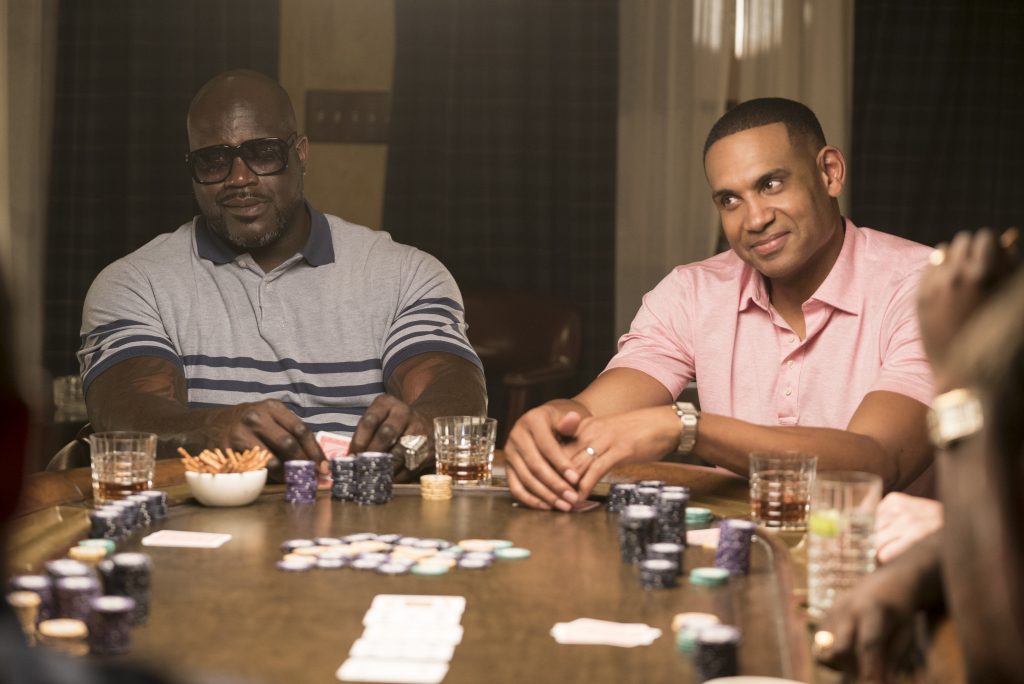 BT: What was it like working with this magnificent ensemble?

AS: My first and foremost thought in casting was surrounding Taraji with an impenetrable wall of talent and particularly comedic talent. Because she has that in comedy, I wanted her to feel that support. Everybody who is in the movie really got it and really enjoyed being part of that journey with her and for her. She’s so lovely and appreciated them so much. Being able to bring in someone like Phoebe Robinson was spectacular for me and having Jason Jones in there made my life a total joy. And having my bedrocks of Wendi (McLendon-Covey) and Max Greenfield and Richard Roundtree and of course, the crazy wild card being Erykah (Badu), was like wow. Remember, we shot the movie so fast, it’s not an expensive movie. It’s a small, lean machine and we were going at the speed of sound. But having Tracy (Morgan) in there… Tracy, when I asked him to do the movie, we had met for a coffee and I said “I’d really like you to do it” and he just broke down in tears. He said “I’m so grateful that you want me to do this, I want to deliver for you so much”. He was crying, and I was like so stunned, because that level of humility and authenticity is not seen often in my business, you know? 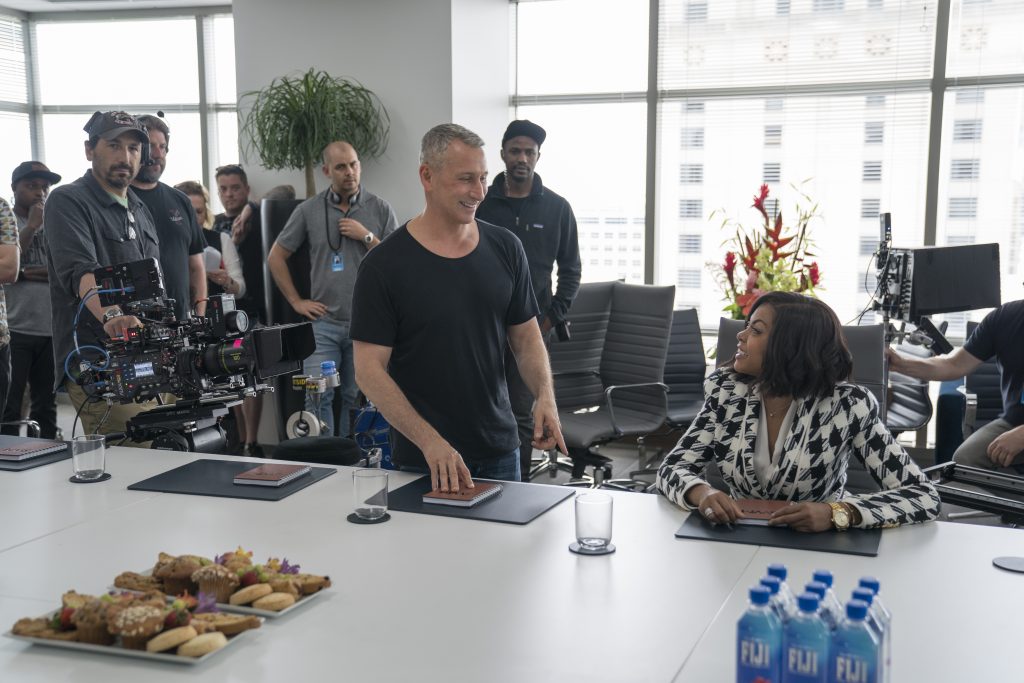 BT: I think you said it was your quickest shoot since A Walk to Remember. Did you know at the time that there would be so much admiration for that film?

AS: No, you do something and you don’t know how it’s going to ripple through the rest of your life. If I do anything with the intention of thinking it’s going to be important, that’s just ego talking. Those tend not to be important, and it’s really the small things. A Walk to Remember resonated with fans more than I could have ever imagined and as such, my relationships with those kids (Mandy Moore and Shane West) have been incredibly important to me. I love those two like I love Krispy Kreme donuts. I love them and they’re very special to me. We had dinner in the last year and we just have fun. Me getting to sit there and watch them, and God, they’re grown-ups now, it’s crazy! So this was really fun. If there’s any thread through my work, it is sort of that sense of optimism and joy, even in my cancer movie. 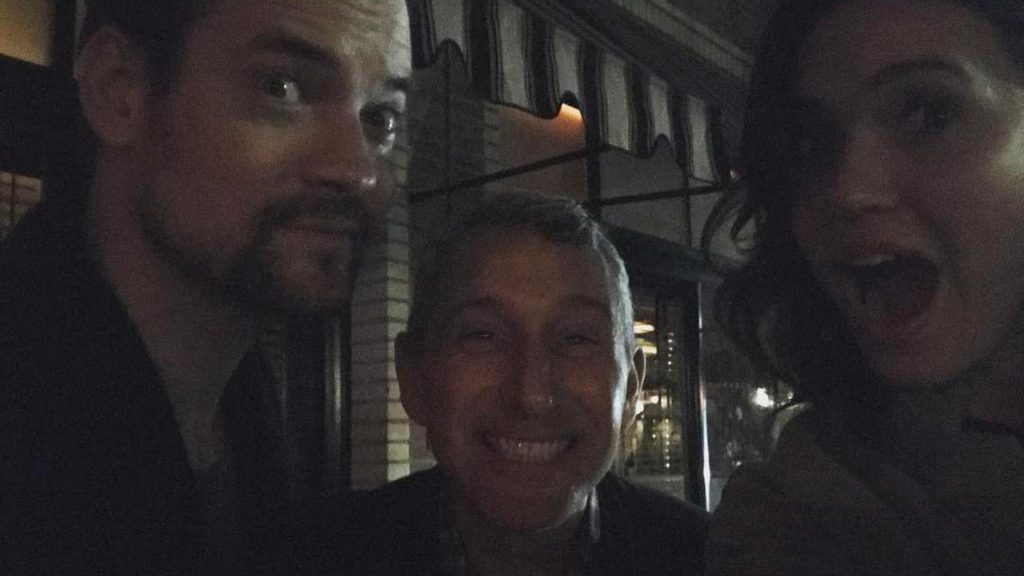 BT: You foster and nurture a lot of positivity and positive relationships. That’s so important and rare nowadays.

AS: This is the most challenging time that I can remember in my life, both politically and socially, out in the world. I think that we are ill-equipped and not adjusted to the nature of what technology has brought to us. I thought I lived in a world that was safer and kinder than it turns out it actually is, and I feel like a person who has had the good fortune that I have had in my life, it is really important that I participate in making sure that people who are coming up behind me have the opportunities that I’ve had, and to feel like they are in a world that is safer and more loved, and have a place to turn and have creative outlets and all of that. I believe in healing, you know, kindness fosters healing and fosters trust and fosters a feeling of safety. When people feel safe, they flourish and they become better people and better contributors to society, and I feel like they can add more – they’re of value, and that’s how I want to help people feel.

BT: What can you say about Step Up: High Water and Disenchanted?

AS: We’re working on it. Second season of Step Up: High Water is coming out and I’m hoping that Disenchanted gets going this year. I have a number of other things that are circling right now, but I am really trying to get Disenchanted going. [pauses] But then I want to make a thriller! I am very interested in crime.

BT: What do you think about the future of content distribution?

AS: I’m very interested to see what Jeffrey Katzenberg does with NewTV creating brief content for phones. I’m just really fascinated to see with what new filmmakers are going to come at us, in terms of new ways of telling stories. For example, when I saw Psych—you can like it, you can not like it, but that was completely original storytelling. That made me incredibly happy. And I look forward to having my breath taken away with new ways of telling these stories.

BT: What is something that people should look out for in What Men Want?

AS: You know what is something that makes me laugh every time that nobody notices? When Taraji is sitting at the bachelorette party complaining about men – how unfair it is about how she’s being treated – and somebody else is talking, she looks at a little rubber penis and flips it into her purse [laughs]. You want to know an Easter egg-y thing? I am a bunch of the voices and I am one of the howling, screaming voices during the Erykah Badu music.

BT: You have to release more footage of Erykah Badu for the Blu-ray bonus features! Those bits over the end credits were fantastic.

AS:  We have a ton of extra material and I definitely did hold on to it. We have a bunch of bonus content. 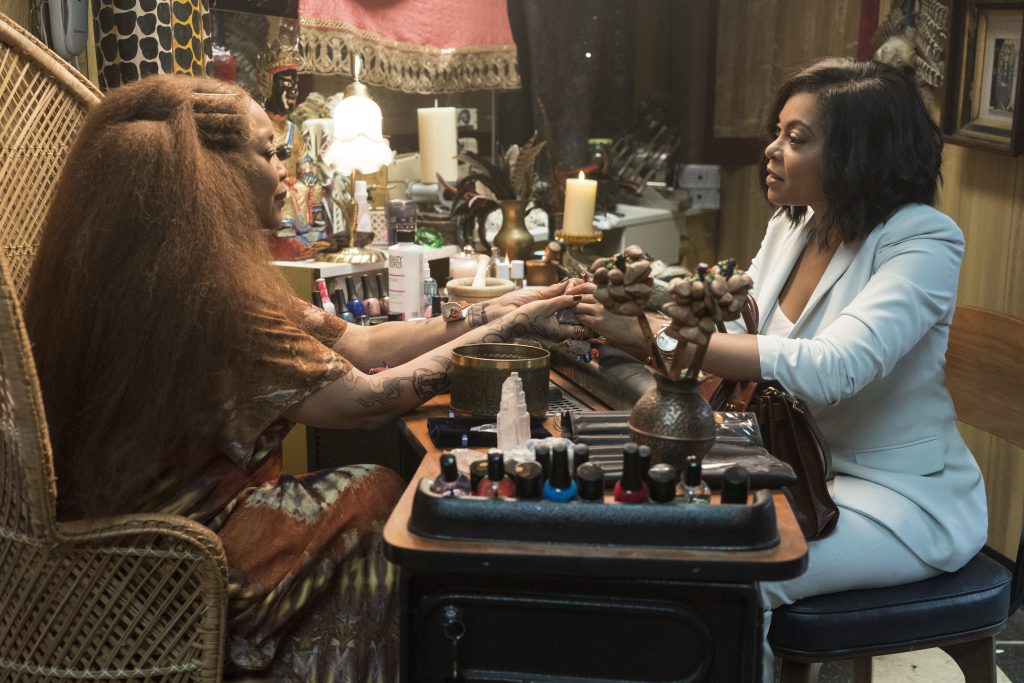