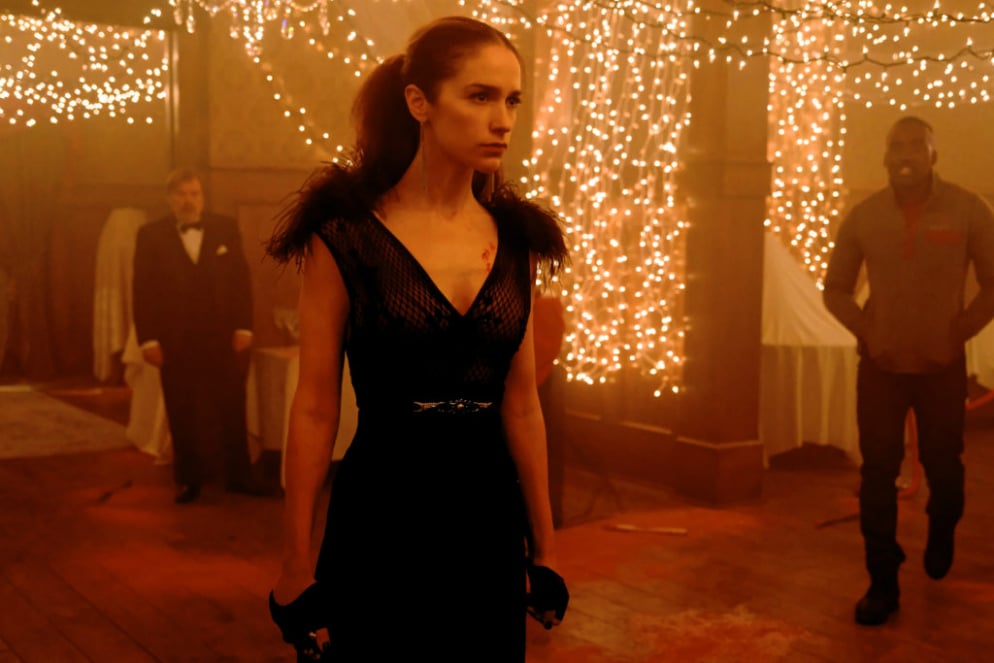 Though we had interviewed Wynonna Earp‘s titular actress Melanie Scrofano prior to our sit down interview, being in the same room as the supremely humble, and yet super talented, Scrofano was a very moving experience. The Canadian actress was pensive before answering each question as honestly and introspectively as possible, and our chat was better for it.

Here is a condensed and edited version of our conversation with Wynonna Earp‘s Melanie Scrofano.

Brief Take: Let’s talk about last season. In advance of your big season 2 reveal, who had you told?

Melanie Scrofano: By then it was “need to know”.  The heads of department knew, some of the cast knew. [pauses] When we were revealing it, the first time I showed my stomach was in that scene with Waverly on the floor, and you see my bump. Some of the crew, even, were like “oh my God! Wait, is that real? What’s happening?”. [laughs] I guess that we had done a pretty good job of hiding it (the pregnancy).

BT: April Mullen described that moment as an emotional reveal, but what your take?

MS: Yeah, even when you describe it now, it’s a little emotional. It was definitely a turning point for me as well as the character. But it was now “the new reality”, plus, how is it going to be accepted and how is it going to play? You know when I was pretending not to be pregnant [laughs] I knew where I stood with everyone, and I knew that the world would accept me, I knew where I fit. But now, in revealing it, was scary, much like for Wynonna I’m sure, because I was like “how is this going to affect my comfy, cozy world?”. And of course it turned out more than fine, it turned out wonderfully, but there was that period of panic.

BT: It must been a real watershed moment for you to feel that acceptance.

MS: Yeah! Something that struck me while you were talking was that it was perfect timing, not that we did it on purpose, obviously, but you can only understand Wynonna’s situation if you appreciate the complexity of the mythology. Once you understand the gravity of it and you appreciate that, you can really go “Oh my God, she’s pregnant!”. Like this goes beyond (mocking) “oh, can she continue doing her job?”. “What is her baby? Is her baby going to survive?”. It just made the mythology even better and just made it more human and immediate.

BT: What was the moment that you realized that the fan reaction to the show would be what it was?

MS: Hmmm…maybe when we announced season 2. We announced it at Comic-Con and I remember that reaction being so electric and the room was just energized. And it was like buzzing! And our executives were there and I think that they felt the crowd…and the thing was, our room was full. Comic-Con and those other conventions, it’s like “they’re full”. And we’re a small show, so that is BIG deal. So when we go to those Cons and feel the energy of the crowd, everything we say about the show matters. That really does reinforce where we are going, and it seems that every season that we’ve tweeted, starting from season 1, when it seemed like a lot, but we look back and say “Oh my God, that’s cute that we thought it was a lot.” [giggles] 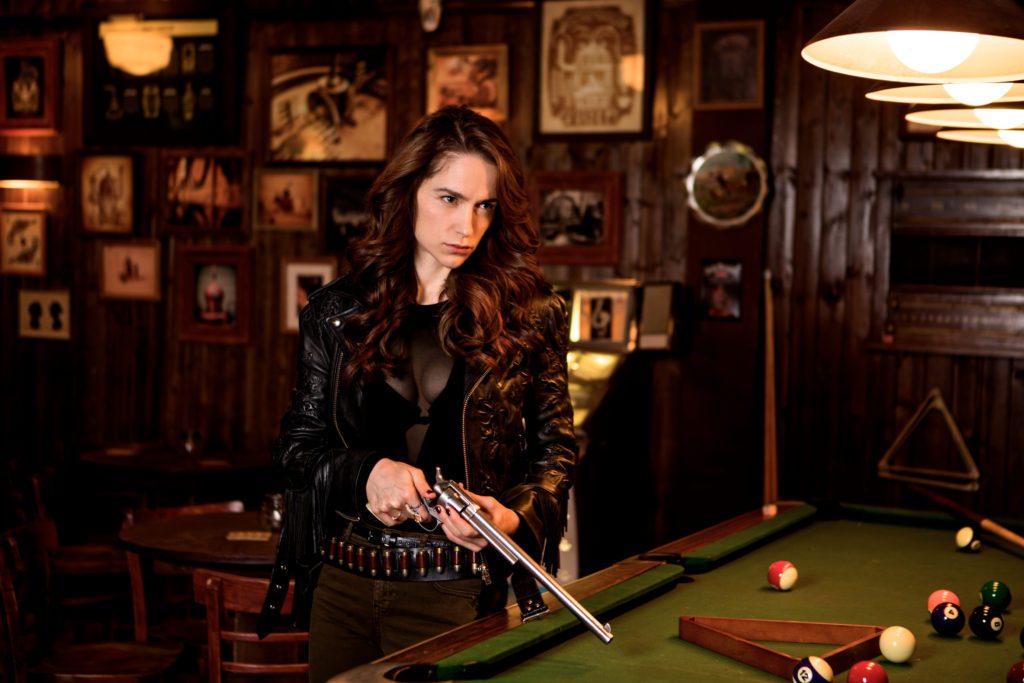 BT: This year at Comic-Con you’re a ‘fan favourite’. What do you expect the reaction to be like?

MS: Well, at the fan favourite event like two people will know who I am in that crowd. [laughs] I don’t know what to expect! It’s awesome. It’s just cool to be included in that. 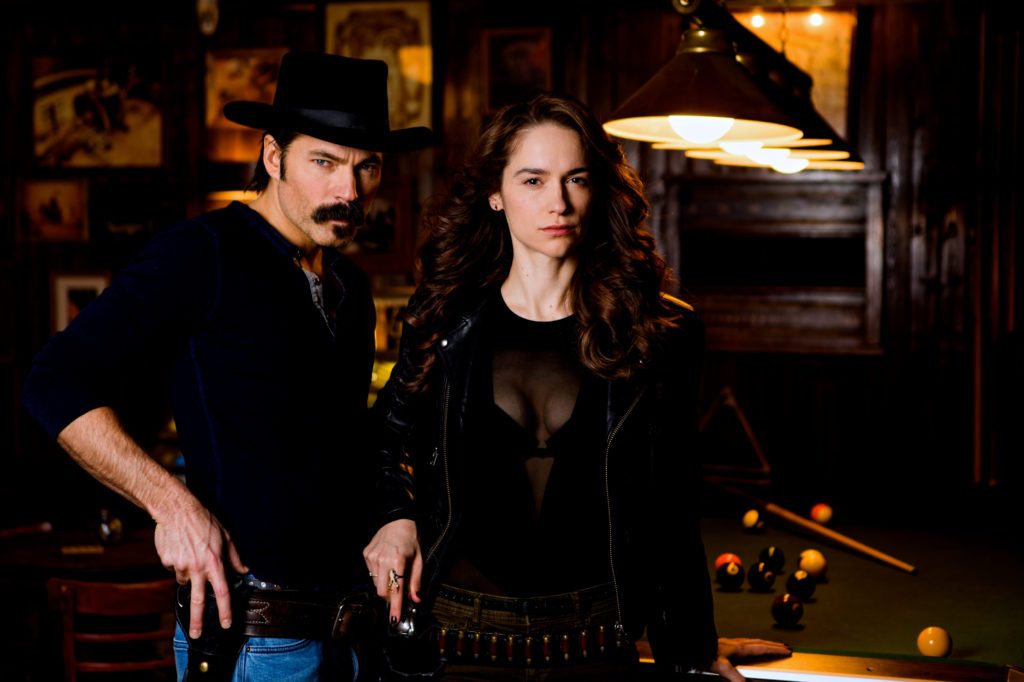 BT: What can you say about the bond that you and Tim Rozon, Shamier Anderson, Dominique Provost-Chalkley and Katherine Barrell have formed?

MS: There’s something about a show like ours that shoots on location and we’re not in our home towns, with all our friends and family, so we really depend on each other to survive really in this cold, hostile environment of Calgary in the winter. [laughs] So we really become a family unit and we really do have those nice moments where you just sit together and nobody talks and its fine, because you’re comfortable with them.

BT: Season 3 opens with Wynonna Earp back in her element. How do you feel about the return to form and how much of yourself do you put in this character?

MS: It was very important to Emily (Andras) to remind people that this is Wynonna, this is who she is, don’t forget that she is wild and strong and sexy and crazy, don’t forget! So she puts her on a mechanical bull and she’s wasted and she puts her in a huge fight. I couldn’t be more grateful that she wanted to remind people of that, because it also reminded me of that. A lot of Wynonna is what I wish I could be. I don’t like confrontation. I’m pretty polite. But I think she’s the side of me that if I could be free, that’s who I’d be. 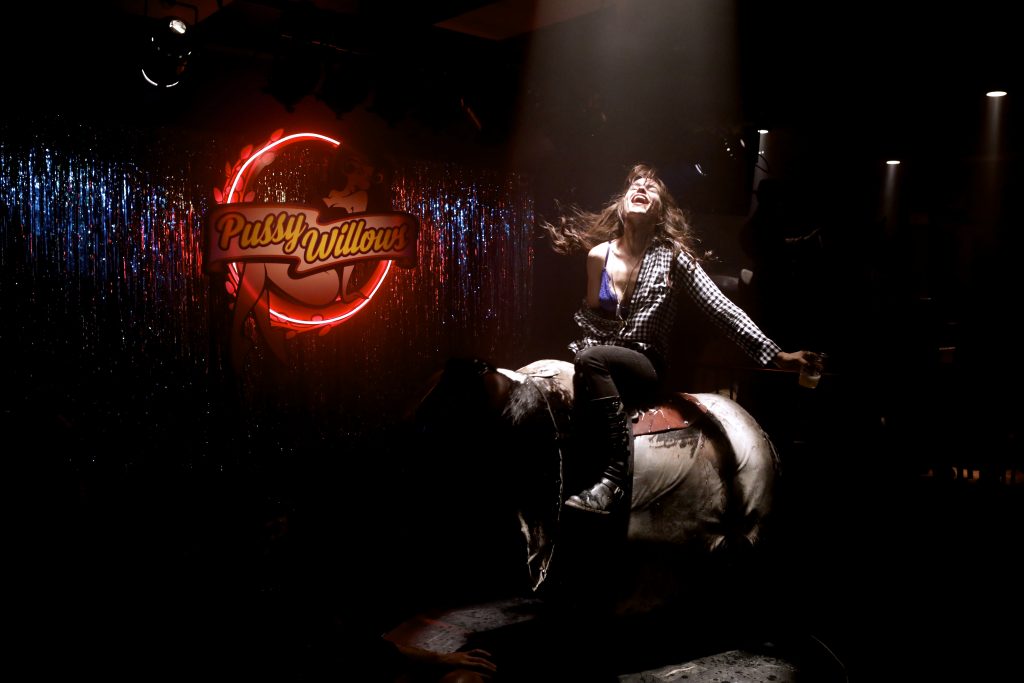 BT: Can you tell me a little bit about your upcoming role on Bad Blood?

MS: I started that two days after I wrapped Wynonna so it was pretty daunting. It’s a heavy, heavy storyline. I don’t know if coming off a show with the Wynonna workload and going straight was maybe the best idea in terms of exhaustion [laughs], but it’s been so satisfying. They love the story and they love my character and they’ve done a good job writing her. And the female perspective of the mob is very interesting and dramatically different from the male perspective.

BT: Did you know that you would be taking on roles that make such a difference?

MS: To be at the point in which I am playing characters that make such a difference to people, and that really tell interesting and important stories, it took getting here to realize how important it is and how satisfying it is.

Season 3 of Wynonna Earp airs beginning this Friday at 10 p.m. on Space Channel