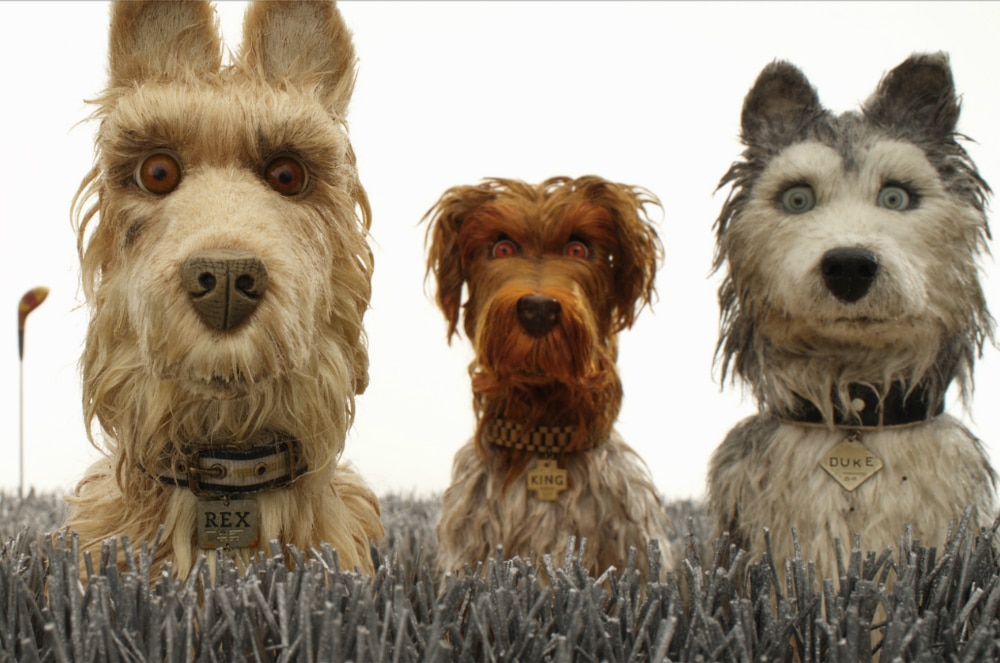 That writer-director Wes Anderson would eventually find himself in Japan, land of intricate design, rigid formalism, and the culture of kawaii, is not surprising given his own aesthetic affinities. His new animated film Isle of Dogs taps into all three by way of a story filled with lovable dogs, adorable kids, and an eccentric mix of ancient mythology and wild futurism. It also finds time for other iconic bits of Japanese culture (kabuki theatre, sumo wrestling, sushi prep, haiku, Akira Kurosawa). When taken all together, you may in fact ask: what took him so long?

After his plane crashes on Trash Island, young Atari Kobayashi (voiced by Koyu Rankin) emerges on a mission to find his dog. Why his pet is stranded in such a wasteland in the first place takes some explaining, but worry not: with some fanciful efforts we’re given the full picture. This is Japan (or our Earth) of the near future. Some areas have been made inhospitable by waste or disaster, others (e.g. dogs) have been forced to take the blame, and only a younger generation (including a Greta Gerwig-voiced striver named Tracy; just between us, the film’s worst element) is willing to fight for a better way forward. But let’s get back to the dogs. Voiced by a cast of Anderson’s regulars (Jeff Goldblum, Bill Murray, Bob Balaban, Ed Norton, and more), plus perfect newcomer Bryan Cranston, the dogs are the main attraction. With considerable zip, all of these characters run through an adventure that is at times strange, beguiling, funny, and sobering. Much like its Japanese inspiration, everything in the film feels confidently placed with an eye towards its effect on the whole. There’s pleasure to be found in that completeness.

Like the best of Anderson’s films though, the cutesy images and insistent ridiculousness of the plot are built over an immense pool of sadness. There’s a happy ending to Isle of Dogs, but it’s leavened by new understanding and the potent sense of loss—of youth, of life, of time—that comes with it. This is the source of the film’s resonance, and why it packs such an emotional wallop. Yes, Anderson continues to stack more and more things onto his meticulous style; but he absolutely will wash it all away with something as simple as a couple cartoon tears, and a meaningful look between a boy and his dog.