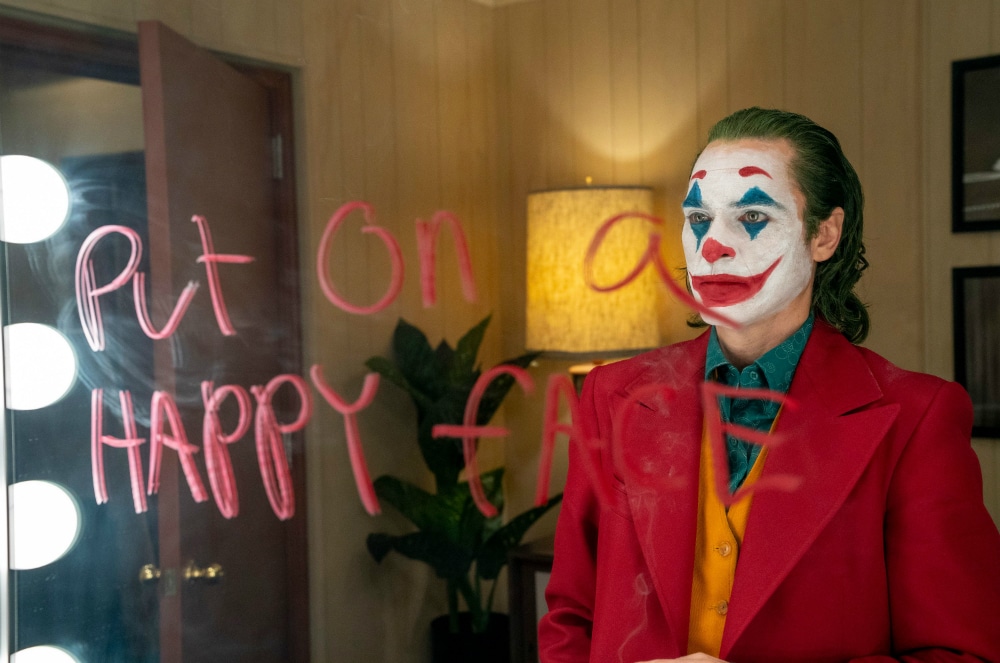 Setting aside the comic book context that granted its existence, what is writer-director Todd Phillips’ Joker trying to say? We have to assume the film is saying something because, well, why else make it? There is no compelling reason to delve into the origin of the famous Batman villain now—it’s been done elsewhere in various ways—not even to watch an overly committed performance from Joaquin Phoenix. So then, what is it? And why are we here?

In Phillips’ telling, co-written with Scott Silver, the Joker begins as Arthur Fleck (Phoenix), a mentally ill clown-for-hire who lives in a dingy Gotham apartment with his mother Penny (Frances Conroy, who deserves better). Everywhere he goes, bad things happen to Arthur, almost as if the world is out to get him. In a sense, he’s right; the world is unfair and the rich of Gotham, namely Thomas Wayne (an appropriately churlish Brett Cullen), are indeed to blame. For most of Joker, that’s all we see: the indignities rained down upon poor Fleck, a man without hope. Even his misguided stand-up career, given an inadvertent boost by talkshow host Murray Franklin (a purposefully miscast Robert De Niro), is taken from him. What else is Fleck to do but slowly (oh so slowly) turn into a crazed criminal? If you can believe this, the problem here is that Phillips’ film only goes halfway. It begins to set up the idea of Fleck vs. the elite but, much like the Joker himself, doesn’t know what to do once it gets there. So in true Phillips fashion, the film just doubles down—on Phoenix’s exertions, on its strain for profundity, and most of all, on violence.

Some of this could be excused if Joker didn’t feel like it was merely aping better, more thoughtful films on the same subject; films that aren’t couched in silly comic book origin stories. Phillips borrows obviously from Martin Scorsese’s King of Comedy and Taxi Driver, adds a little Death Wish, and even some touches taken straight from Network and Psycho. The chaos of this mix doesn’t produce true artistic anarchy, however—just nihilism. And only someone in Phillips’ insulated position could mistake the two.