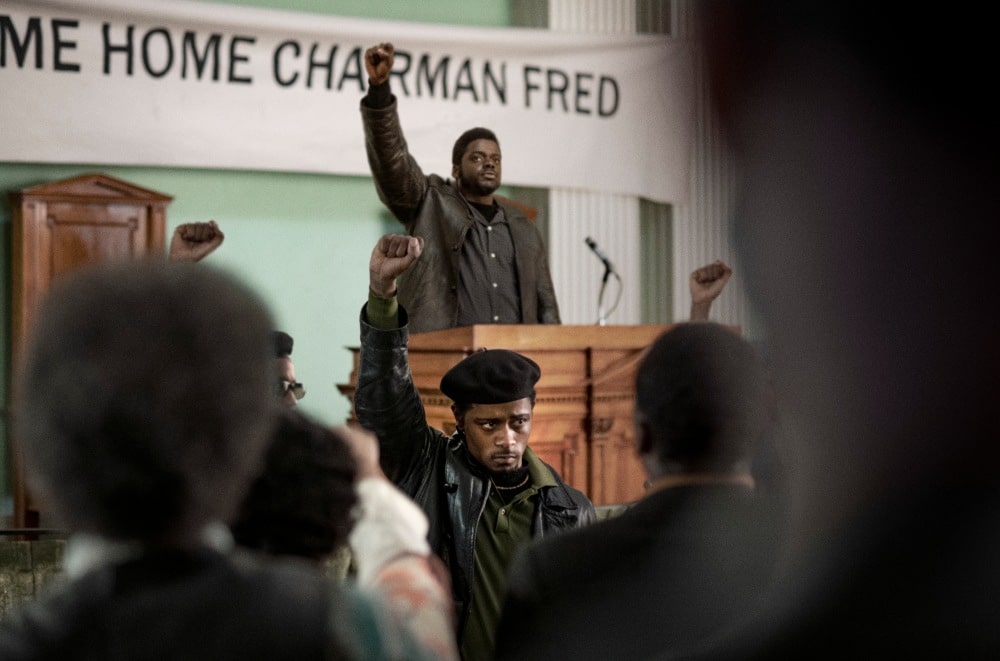 Judas and the Black Messiah is inspiring and brutal because the stories of Black revolutionaries almost always turn out that way. As directed by Shaka King and co-written with Will Berson, we see the struggle of Fred Hampton, leader of the Chicago chapter of the Black Panther Party, who was hounded by the FBI, jailed, and eventually assassinated. If this is a spoiler to you, dear reader, then yes, this movie is one to watch.

As the true story unfolds in Judas and the Black Messiah, we also see the role Bill O’Neal (LaKeith Stanfield, excellent), security chief and informant, played in Hampton’s life and death. As convincingly brought to the screen by Daniel Kaluuya, Hampton was a force, a charismatic leader who was as confident at the pulpit as he was in a quiet room. The vibrancy of Kaluuya makes it unthinkable that Hampton could be stopped, but the film never underestimates the insidious white supremacist power of the U.S. police state, given face here by Jesse Plemons (absolutely superb) and Martin Sheen (as the vile J. Edgar Hoover). To King’s credit, he makes something else clear too: while Hampton was perhaps a one-in-a-million figure, the movement he led was bigger than any one man. With sharp period detail and music, King’s film paints as broad a picture as it can, illustrating how a revolution can (and must) be carried out. It’s not particularly glamourous work—and, yes, it is brutal at times—but the film inspires nonetheless. Especially if you’ve never heard of Hampton, murdered at just 21 years old.

Still, we can wonder if mainstream films like Judas and the Black Messiah can be genuinely revolutionary. Is it good that Hampton’s story is now seen as a money-maker worth investing in, even as the film calls for overthrowing the capitalist system in which it was created? It’s something to consider. However, by illuminating what both Hampton and O’Neal did, the film exposes a more valuable lesson: no one is free until everyone is free. Make sure to consider that too.