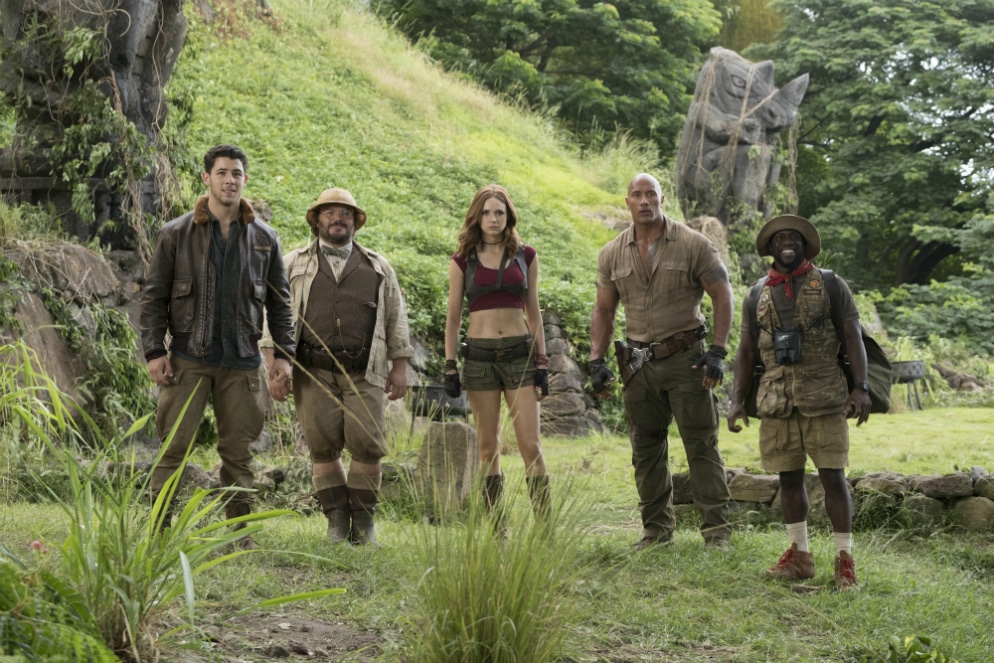 Credit to Jumanji: Welcome to the Jungle, the new film from director Jake Kasdan, it plays to its strengths. Much like the titular (albeit fake) board game, the film knows it just has to move its pieces — Dwayne “The Rock” Johnson, Kevin Hart, Jack Black, and Karen Gillan — around the screen to find some entertainment value and modest distraction. And move them it does, even if we can always tell exactly where they’re going. (Which, come to think of it, is also like a board game.)

Unlike the 1995 Robin Williams film however, this Jumanji is not actually built around a board game. Instead, it finds five forgettable teens sucked into a jungle by way of a 90’s video game cartridge. The teens fit well-worn archetypes, a la The Breakfast Club, and are only really brought to life by the aforementioned stars as their stand-in video game avatars. So, the nerd now has muscles, the jock becomes a puny weakling, the hot girl adjusts to being Jack Black, and so on. With a punchy script from Chris McKenna, Kasdan whips them all through a standard video game narrative involving a stolen jewel, the evil explorer Van Pelt (played with relish by Bobby Cannavale), and the menacing animals and goons he controls. Your mileage may vary on the concept, but if you (like me) have memories of fetch quests or non-player characters, there’s a chuckle to be had here. The rest is up to the capable leads, who really can’t not be charming to watch. (Black in particular has a lot of fun emoting like a teen girl.) Only Nick Jonas plays things too straight to make much of an impression. The ultimate point here is to be broad, and to own it.

Which is also part of the problem. Jumanji’s heart is in the right place, and it’s not nearly as cynical as it could have been, and it presumably will provide fun for the whole family. But that only counts for so much. It’s telling that this version replaces the previous film’s attempt at deeper and darker themes with simple video game nostalgia and winking irony. For a film that cajoles its characters to be their bravest selves, Jumanji certainly doesn’t risk much. That it reaches its goal may count as a win for some; for me, I’d rather play something else.