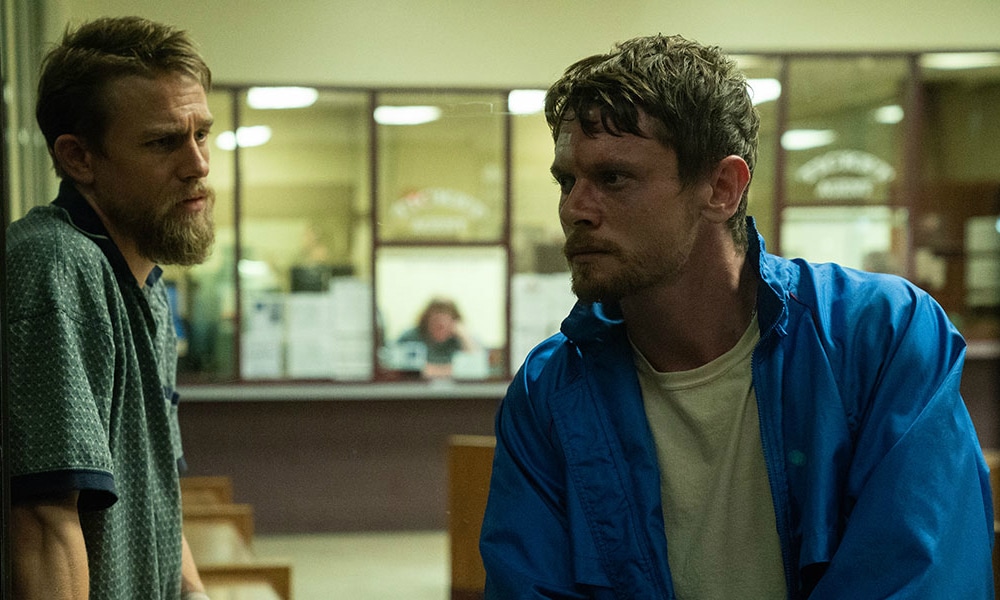 Early in Jungleland, directed by Max Winkler, we watch as Sky (Jessica Barden) asks about Lion’s (Jack O’Connell) rattail hairstyle. Before he can get too far into his explanation, his older brother Stanley (Charlie Hunnam) jumps in to correct them both: that’s his lion tail. It’s an obvious punchline, but much of Winkler’s film divides itself along those lines: what’s there and what it believes is there. Your reception of the film just depends on which side you fall on.

The Kaminski brothers are a team—Lion fights, Stanley manages—but their fortunes have almost hit bottom. When mid-level gangster Pepper (a purring Jonathan Majors) cuts them a deal for a chance to bare-knuckle box for big money, they hit the road to San Francisco with Sky in tow. She’s part of the bargain too, a fellow bottom-dweller to be delivered to mysterious kingpin Yates (John Cullum). As with everything else, the brothers must take the bad with the good (or find the good in the bad). In this, Jungleland‘s binary, written by Winkler, Theodore Bressman, and David Branson Smith, proves to be an effective—albeit basic—one. We watch this on-screen trio make choices, deal with repercussions, and scuttle along like those aforementioned rats. For their parts, Hunnam, O’Connell, and Barden carry their American accents well enough (I think Barden comes out ahead); and they all emote with great verve while moving through their downtrodden world. Fittingly though, this America is one in which even the luxury hotels look and feel a bit fake.

It’s the strength of the film’s belief—from Stanley, Lion, and Winkler—that coaches the viewer to expect and welcome more. That’s Jungleland in ramshackle miniature, a well-composed, urgent work that feels so certain of what it’s saying and doing, it just keeps roaring and throwing haymakers. By the time the Boss pops up on the soundtrack (though not with his eponymous song), the film indeed has enough force to land a knockout blow. I can admit it put me on my ass.