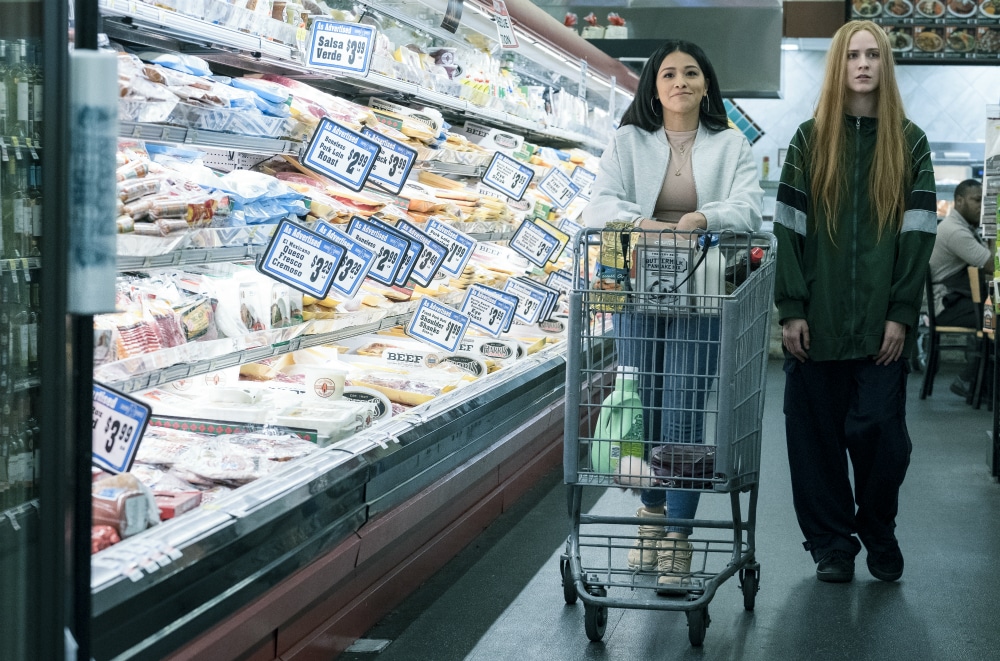 Everything about Evan Rachel Wood’s character in Kajillionaire is heartbreaking. As conceived by writer-director Miranda July, she’s given the unfortunate name of Old Dolio, with a droopy wardrobe to match. All becomes clearer though as we’re introduced to her parents, her situation, and her askew version of the world. As per usual with July’s work, this film is weird in quotation marks, garnering an eye-roll or two along the way. Yet that odd energy does find a home in something real.

Old Dolio’s parents Robert (Richard Jenkins) and Theresa (Debra Winger) are low-level scammers. Their days are spent taking advantage of whatever or whoever they can, no matter how small the gains. By design, their family operates like a professional (albeit ridiculous) heist crew, one in which Old Dolio is merely a useful third member; as achingly portrayed by Wood, Old Dolio yearns for more. Enter Gina Rodriguez’s Melanie, a fresh world of scams, and new feelings. Taken together, Kajillionaire channels almost irresponsible live-wire energy, always seeming on the verge of getting caught. July’s story is one of dysfunction at every level—interpersonal, familial, societal—a combination of breakdowns induced by unsolvable stress and fostered by the ever-increasing transactional nature of our world. As such, while I’ll likely never meet anyone like Old Dolio—no matter how real Wood makes her—I can believe she and her family exists. That’s the strength of July’s film; the performances surely help, but even when it risks looking silly or desperate, we remain in its thrall.

Of course, July can’t resist tweaking her film in ways that maybe don’t quite work. A series of earthquakes in Kajillionaire, for example, register as an obvious metaphor for whatever is building inside Old Dolio. It reads as a bit too much. Then again: it would feel like that, wouldn’t it? If you lived your whole life like this young woman, stressed and self-contained, you’d want to explode with unknown emotions too. Before checking out, this film offers the value of that discovery.

Interview: The Devil All The Time’s Harry Melling