King Arthur: The Legend of the Sword Blu-ray Review 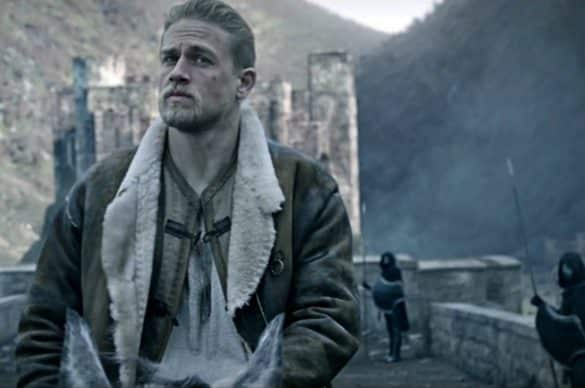 Though considered to be a box office bomb, there was a lot of a curious streak running through the Guy Ritchie film King Arthur: Legend of the Sword to suggest that there is something fascinating at play, but it’s overstuffed to the point that we are watching about three or four adaptations at once. The one that perhaps resonates the most is the Ritchie-fied Gangster version of the King Arthur story, anachronisms aplenty. There are two scenes in particular, one in which Arthur (a strangely haircut Charlie Hunnam) tells a story to his scout Jack’s Eye (played by Michael McElhatton, Roose Bolton on Game of Thrones). The interplay between what people are going to say and what they will do being prefigured in a humorous exchange, (sort of like one story telling the other), is a classic Ritchie trait that would have played well in, say, Snatch, so when it is done a second time, it feels the better for it.

There is also a pre-opening credits sequence that is so incomprehensible (and feels much like a Game of Thrones episode, only starting in the middle), that one has to wonder what the point of dropping a viewer in the middle of the action would be, other than to perhaps leave poor Eric Bana as Uther Pendragon facing the ignominy of having his name appear long after he drops out of the story, his earlier adventures already complete. The even poorer Djimon Hounsou, who appears in this sort of setting in Gladiator, is a welcome presence but a confusing Sir Bedivere, and perhaps the less said about Tom Wu’s Sir George, the better.

Cameos by the director himself and David Beckham suggest a campy approach to the film, contrasted by the ultra-violence mainly perpetrated by the villainous Vortigen, played by Jude Law with such charm that one is left to wonder if he would have been a more suitable King Arthur had he still possessed his follicles and the film was made fifteen years ago. Not to overkill the Thrones references, though it’s worth mentioning that Aiden Gillen is Goosefat Bill, a substitute for Littlefinger (sans beard), and whatever is going on with the Mage (Astrid Bergès-Frisbey) seems incomprehensible. The film lurches towards a twist ending that doesn’t arrive, features a soundtrack that is worthwhile, though also blends styles, and enough CG to drive up the budget significantly. 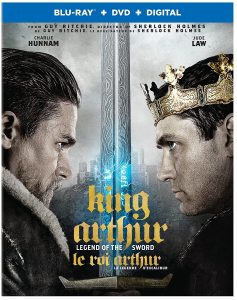 There are about seven or eight special features that are all pleasant enough, but seem to suggest that a better or at least a clearer movie is being made. There are no commentaries, director or otherwise.

It’s a huge mess and I am sorry for many of the protagonists, but King Arthur: Legend of the Sword is still eminently watchable and worth placing in the collection perhaps for this characteristic. It is a legend unto itself.