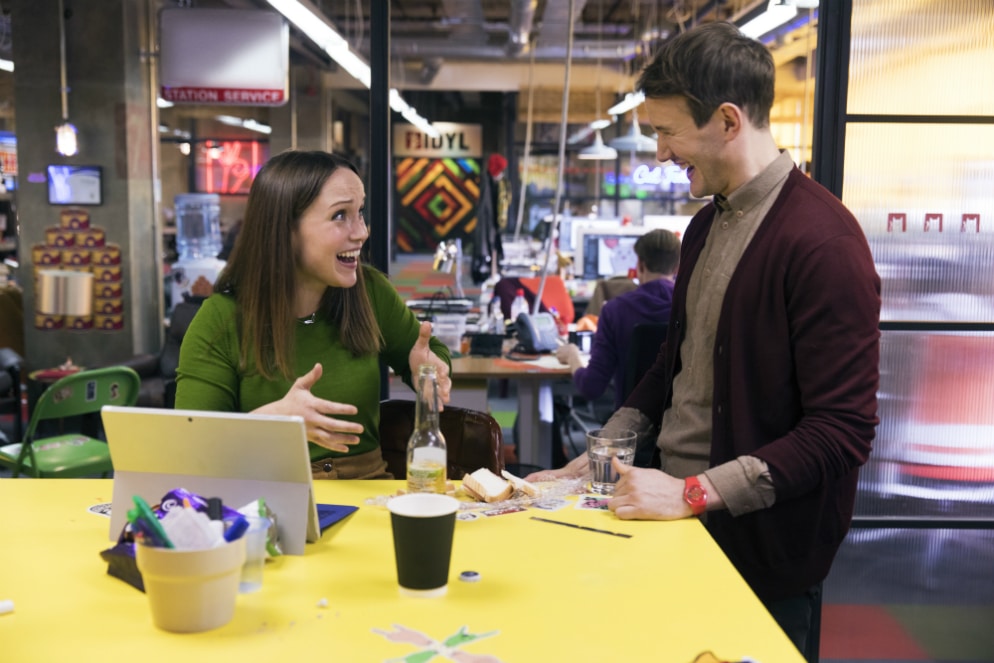 The AMC Original Series Loaded is actually a partnership with UK’s Channel 4, as the show features four British leads, (and also Mary McCormack, but more on her later), in a show that is based on an Israeli series Mesudarim. The show will be premiering Monday, July 17th on AMC and continuing to air its next seven episodes on a surprisingly interesting pairing with the show Preacher, a pair of one-word title shows.

The show is one that I was fairly skeptical about hearing about early on, as the title and description suggest a much darker tone, and while I would be okay with that, I wasn’t expecting such a funny and yes, a little dark comedy. The show centers around four tech overnight-billionaires: Jim Howick as Josh, Leon, played by Samuel Anderson, Jonny Sweet as meek Ewan, and Nick Helm as the bizarre Watto. Yes, I realize that right away the show sounds a lot like Silicon Valley, and there can be some comparisons made right off the bat that tie these characters together. However, the show has a lot more time to breathe at one hour, and furthermore, the suffering period lasts about a minute into the first episode, because the foursome is successful with their Cat Factory game, (as well they should be, cats are awesome), and the show is much more about how money doesn’t really solve any of the problems, perhaps even enhancing them and making them worse.

For example, in the pilot, Josh buys a Ferrari but is scolded because most tech billionaires ride smart cars or Priuses. In fact, much of the scolding is done by Mary McCormack as the American boss, Casey, who appears via Skype in the first episode. Once she lands in London, the show becomes even funnier, as she is the fish out of water, but still schools the guys on getting stuff done. Ewan is very much a Jared but has trouble firing people, instead giving them raises of £18,000. The character of Leon is probably the most complex and Anderson feels like the breakout star of the show. Howick is concerned with trying to get his ex-girlfriend Abi (Aimee-Ffion Edwards) back from an extremely tall cyclist who biked around Canada, and Welsh Ffion-Edwards gets many of the show’s huge laughs with her deadpan delivery. Helm as the weirdo Watto is the character that I have the most trouble getting my head around, but certainly fits in with the ensemble.

The show definitely grows on you, and would be worth checking out if only to see a Barbershop Quartet go around to former enemies singing “Suck my Balls” in perfect harmony and striped jackets.