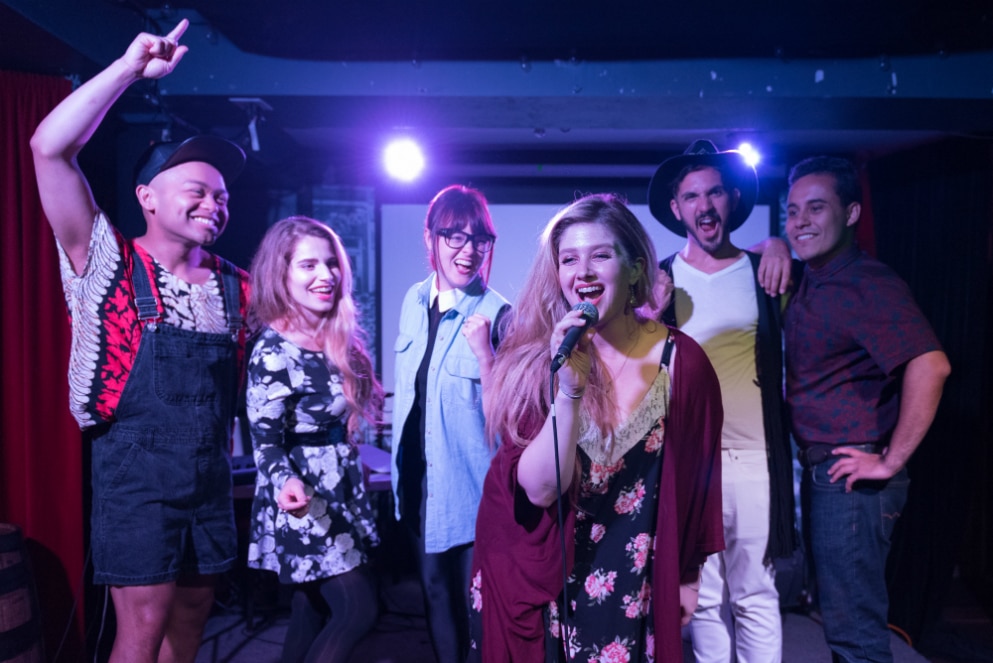 Maddie’s Karaoke Birthday Party is set in the Monarch Tavern, which is both its greatest attribute, (the Monarch Tavern is a great venue), and its worst, (the night that we attended, the musical was clearly oversold, started late, and had audience members that didn’t realize that they were watching live theatre). While there is a pretty good joke about how the audience is stuck watching Karaoke at the Monarch Tavern, the venue works to its detriment.

The members of the troupe are waiting for Maddie to arrive for her twenty-fifth birthday party and they sing karaoke songs in between monologues about the character. What surprises, at least initially, is that these are all new songs, sung in the style of familiar performers, (Kelly Clarkson, Alannah Myles, Ke$ha), but with lots of in-joke references about Toronto.

The set-up of the audience members being participants in the show was utilized slightly, but the idea of keeping the bar open through the show did no favours, as the lines blurred between obnoxious audience members and cast members pretending to be obnoxious audience members. When Maddie (Kelly Holliff) does finally arrive, (and not from among the audience as I had expected), there is a great set-piece within the horde in which she refutes earlier claims from friends and non-friends. The cast is game, though Erica Peck stood out among them as a *big* fan of a certain Canadian chanteuse.

There was so much potential in Barbara Johnson, Suzy Wilde and Byron Laviolette’s team-up, but until the show either becomes fully immersive and makes use of the space, or perhaps less immersive and is given its theatrical due, it remains in the between-state.