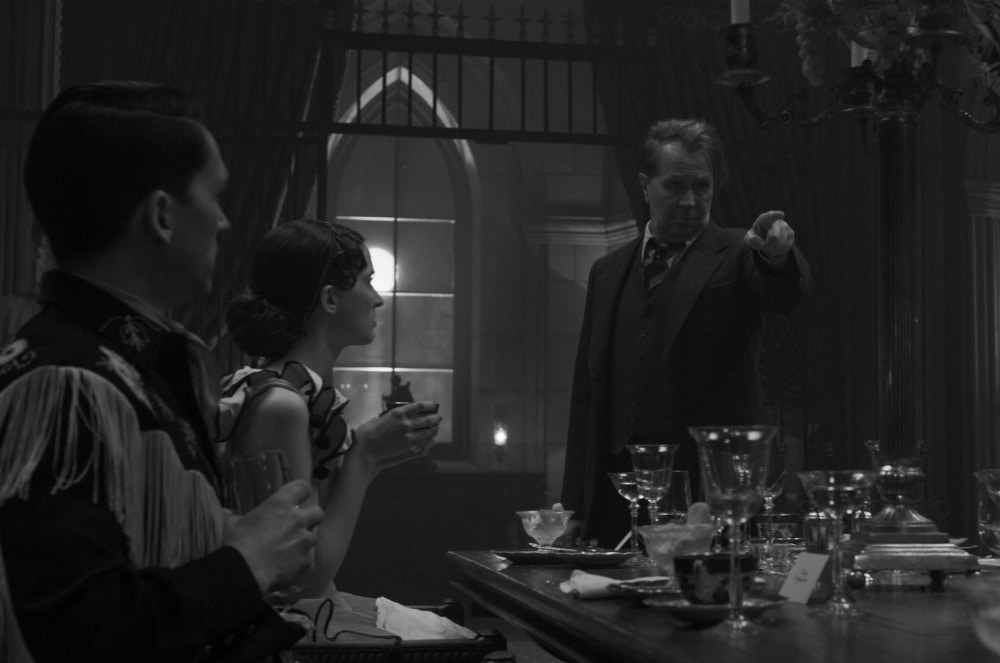 David Fincher’s Mank is a dense film, one deserving of the same scrutiny granted to, yes, even the mighty works of Orson Welles. It should be said that Fincher’s film, from a script credited to his father Jack, is not actually about Welles (though he does appear). Still, like any good impresario—if one not as legendary—Fincher knows how to dazzle and misdirect before the final flourish. But does he actually manage to pull off the show or have we just been conned?

The title Mank is drawn from Herman J. Mankiewicz (played by Gary Oldman), a drunken raconteur whose name happens to be on one of the greatest films ever made, Welles’ Citizen Kane. Fincher’s film, however, is not about the making of that film—at least not directly. Sure, we come to understand how Mank was hired by Welles (Tom Burke) and posted in a remote cabin to write the screenplay. But really, with its Kane-esque flashbacks, the film studies the political and Hollywood particulars swirling around Mank, and the forces that shaped his creative thinking. As such, it’s more than a mere “who should get credit?” investigation, as it instead gazes at the power of the cinematic image and those who would wield it for their own ends—be they making a film career or, say, a state governor. That’s where Fincher’s fictionalizing and old-timey affectations meet actual reality, with a bevy of historical figures (including Marion Davies, W.R. Hearst, and Louis B. Mayer, played by Amanda Seyfried, Charles Dance, and Arliss Howard) on hand. Taken altogether, the film is never less than engaging and educational. There’s really no disputing that.

But Mank also wants a happy ending. And while that’s based on true enough events—Mank winning an Oscar, for example—it doesn’t feel quite right. It was Welles, after all, who had his career mangled by the industry, much more so than Mank’s own. So then, is this just more Hollywood magic? Maybe. My guess is that Fincher, like the greats before him, knows what he’s doing—even if he’s deceiving himself too.