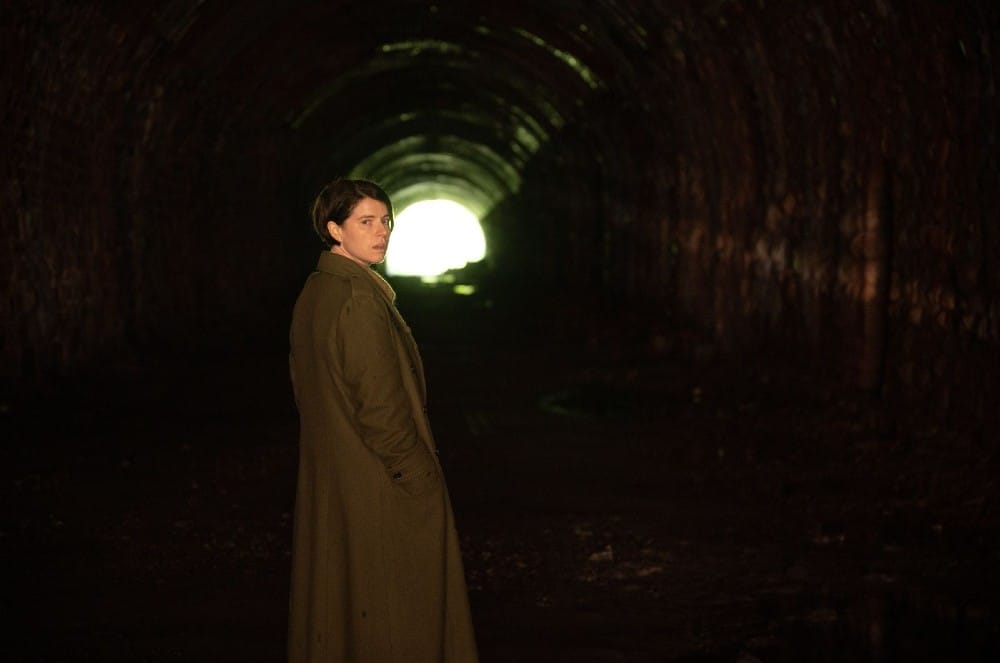 The opening sequence of writer-director Alex Garland’s Men provides a neat summary of his whole deal as an artist. His film does not skimp on arresting imagery from the jump, making it easy to be seduced and unsettled by the mood fostered in the intro. But then the film’s heroine eats an apple from a tree in her supposed Eden and we remember: Garland’s generation of beguiling mystery is bound to give way to the obvious eventually.

At least no one told Jessie Buckley to adjust her expectations in this way, because she gives her performance almost everything she’s got—and probably more than Garland’s narrative deserves. She plays Harper, a woman who has recently survived a traumatic break-up with her partner, James (a one-note Paapa Essiedu), a plot point Men unloads for maximum impact. For a break, Harper takes a solo vacation to an old English manor operated by Geoffrey (Rory Kinnear); but no relief is found there either. Shortly after she arrives, a strange figure in the woods appears to stalk her, setting off a series of encounters with various types of, you guessed it, men (all played, in a not unfunny turn, by Kinnear). Since Buckley is such a good actress, she’s able to propel the film along under her own power. It becomes apparent, however, that Garland never quite decided what he was trying to do here (again, besides the obvious). So his formerly sharp imagery gives way to a mishmash of pagan horror tropes and home invasion scares that provide a few jumps in isolation, but when taken together never really cohere into a meaningful whole.

To be clear, horror films can excel with the inexplicable and Men is striving for just that effect, particularly in its wordless conclusion. However, Garland also reaches for something contemporary, a message on gender dynamics and allyship that is meant to resonate with our current era. In that light, his film’s title is a punchline—one only good for eliciting a groan.