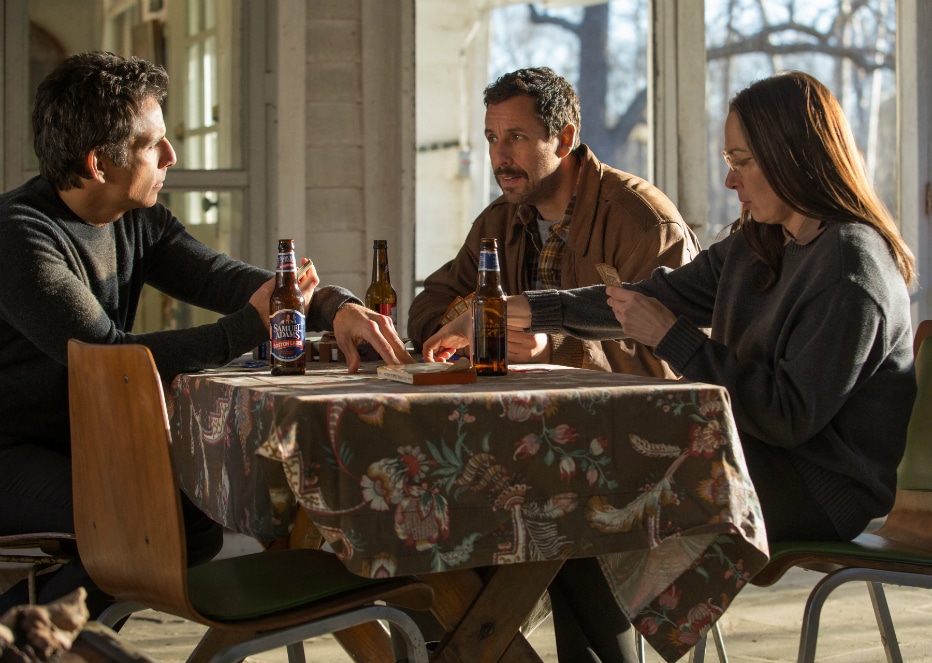 In any film in which Adam Sandler is not playing “Adam Sandler” it’s hard not to begin and end with his performance; he remains somehow both an exhausting known quantity and a great unknown. In writer/director Noah Baumbach’s latest film, The Meyerowitz Stories (New and Selected), we know what to expect from Sandler’s big name co-stars Ben Stiller and Dustin Hoffman, but we approach the man himself with trepidation; what kind of show will this be? Fortunately, as with his best roles (of which there are a couple!), Sandler surprises anew.

Baumbach’s film regards the Meyerowitz family, splintered by divorce, as it gets various affairs in order. Sandler’s Danny, the oldest child, is now a newly divorced father whose idealistic daughter Eliza (Grace Van Patten) is off to college. His sister Jean (a wonderfully understated Elizabeth Marvel) processes her neurosis in the shadow of her siblings. And Stiller plays their younger half-brother, a driven money manager struggling with his work-life balance. The patriarch is Harold (Hoffman, well-suited for the role), a Bard professor and sculptor of modest renown, who appears unaware of how bad a job he’s done as a dad — but who seems painfully aware of how his artistic career has gone. He’s tended by his fourth wife Maureen (a hippified Emma Thompson, playing drunk), which hints at how long this dysfunction has been going on. With cheeky title cards and some sharp editing, Baumbach’s film feels like a pleasurable flip through a much larger biographical account. He moves these characters in and around the Manhattan art scene as they deal with each other, their individual internalized pain, and their father’s undiagnosed illness, finally arriving at a fresh page in the story, if not complete reconciliation.

All of this is to say, The Meyerowitz Stories is familiar material for Baumbach. But unlike the curdled mélange of, say, Margot At The Wedding, there’s a rich undercurrent of warmth and forgiveness here. Yes, these people are messed up — as parents and siblings, as children, and now as adults — but they’re labouring towards some kind of inner peace. Baumbach’s achievement then is visualizing those small gains relative to the broader context of each family member’s ongoing life. Oh, and he coaxes another sad and delightful performance from Sandler. Let’s not forget that.