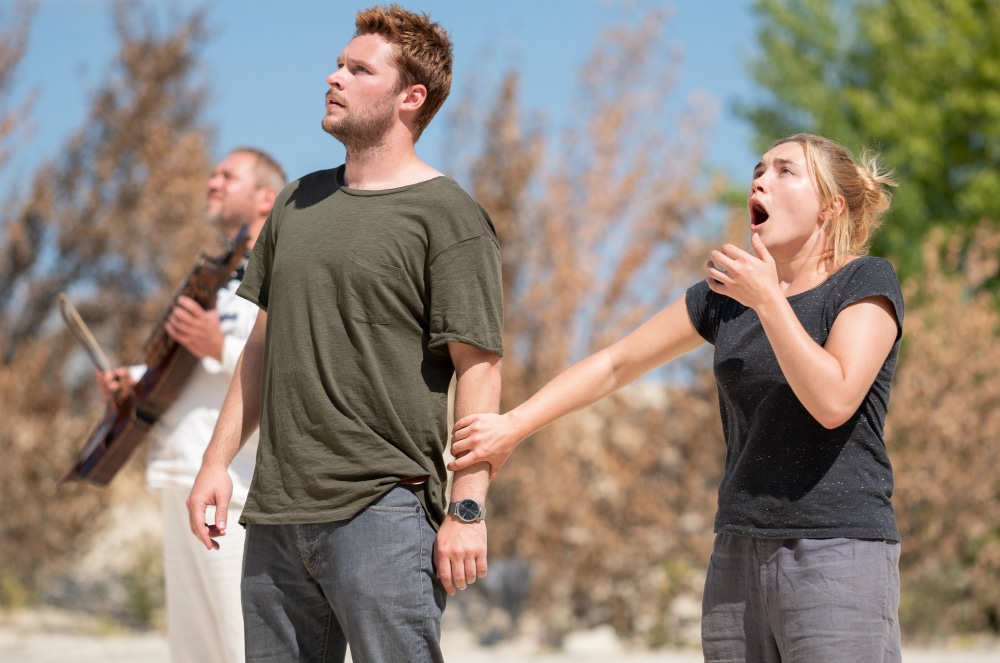 Setting a horror film in a bright field in northern Sweden tracks as a unique challenge, one worthy of a filmmaker eager to make the most of his time in the spotlight. Fresh off his hit debut, Hereditary, Ari Aster is one such aspirant. His new film, Midsommar, takes place almost entirely on a single grassy plain, and, true to its geography, the sun hangs high throughout. Nevertheless, Aster fosters a tone of dread and unease anyway. We know something bad is going to happen here—we just have to wait two hours to see what form it will take.

To lead us on this squeamish journey, we’re introduced to a strained couple, Dani and Christian (Florence Pugh and Jack Reynor). The former opens the film having discovered some extreme family trauma; the latter tries to provide emotional support. On this uneasy alliance, their friends, including Mark (Will Poulter, boorish again), Josh (William Jackson Harper, nerdish again), and Pelle (Vilhelm Blomgren, Swedish again), must balance. The group decides to visit Pelle’s strange village, ostensibly so Josh can work on his thesis, but mostly so the guys can trip on drugs and maybe chase a girl or two (Dani gets a pity invite from Christian’s sense of duty). For much of Midsommar’s long first half, that’s what we get—until an abrupt, but not unexpected, blast of violence warps the already creepy vibe. Sadly, while the film does indeed get freakier, it never quite cuts loose. Aster may have spared no expense in layering his film with symbols and myth, lacquering it with real pagan history to lend its plot weight. But all that imagery doesn’t deepen the unsettling mystery; it only foreshadows the obvious.

There’s a parallel at work here. While we watch Dani, Christian, and their friends gradually come apart (sometimes literally), we’re left to wonder how they missed the signs of foreboding trouble early. (These are supposed to be graduate students?) Meanwhile, as marvelous as Aster’s production is, with its lavish, full-scale construction, it’s hard not to ask how he got so far along without someone, a producer, stepping in. What both he and his characters really needed was a reason to escape their sense of obligation, to tell them all: you don’t have to go there.