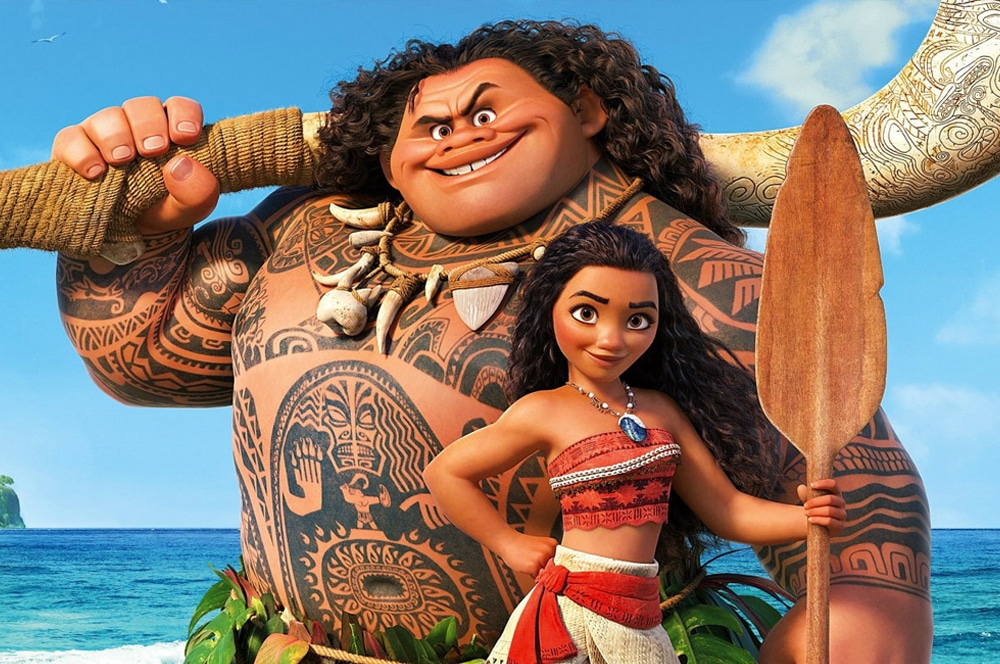 The difficulty with putting out two Disney animated releases in one year, (and really, how lucky are we if this is a big concern?) is that the two films often get compared to each other. This was in play last year when Inside Out and The Good Dinosaur, a pair of Disney Pixar films, came out so close to each other in 2015.

So rather than to compare the self-reflexive early 2016  Zootopia with the much more “heart-on-its-sleeve” late 2016 entry, Moana, instead this review will focus on looking at Moana on its own merits, and perhaps on its drawbacks.

The animation: The team at Disney animation are at the top of their game with this film. This is coming from a reviewer that watches a great deal of animated films (and a great deal of Disney films), and certainly has no pressing concern for praising the film’s animation, led by Ron Musker and John Clements. Yet this film is absolutely stunning, mainly at the start, and praise needs to go the animators, who had some side angle shots that had us questioning whether or not this film was shot with real people. Scorching.

The journey: The idea at the beginning of the film that Moana (delightful newcomer Auli’i Cravalho) has no need to leave her island because there is enough already there, strangely reminded this reviewer first and foremost of Christopher Guest and his song from A Mighty Wind, called Never Did No Wandering. It would have been a funny idea if Moana had simply stayed on the island and not gone anywhere. But then the crops turn, and the sea calls to her, well, although it’s a physical journey it’s also a journey of self. It could have easily been maintained on the island itself.

The songs: This is the area in which Moana is surprisingly the weakest, as the songs co-written by Lin-Manuel Miranda, Mark Mancina and Opetaia Foa’i, there are a couple of upbeat and happy songs, You’re Welcome is cute, How Far I’ll Go very inspirational, but the songs on the whole are missing that certain magic that is present in Disney animated films. Actually, this is a bit of an understatement as the songs seem like L-MM songs that are just slightly less developed than his tunes from Hamilton and In The Heights. Good…but not otherworldly.

The sounds: The voice cast is first-rate, as they should be expected to be. The Rock is great as Maui and Cravalho is adorkable as Moana. Alan Tudyk brings some comic relief as the chicken Heihei and Hamilton alums Christopher Jackson and Phillipa Soo are nice to appear as singing voices, Clement is fun as the mid-boss Tamotoa, and Nicole Scherzinger effectively pulls double duty singing and acting duty as Moana’s mother.

The message: The film is mainly a two-hander, with Maui and Moana spending a fair bit of time together on a boat. The film slyly subverts its Disney Princess message with an emphasis on girl power and being self -sufficient. Overall, the time spent interacting and being with these characters makes Moana a pleasant experience.