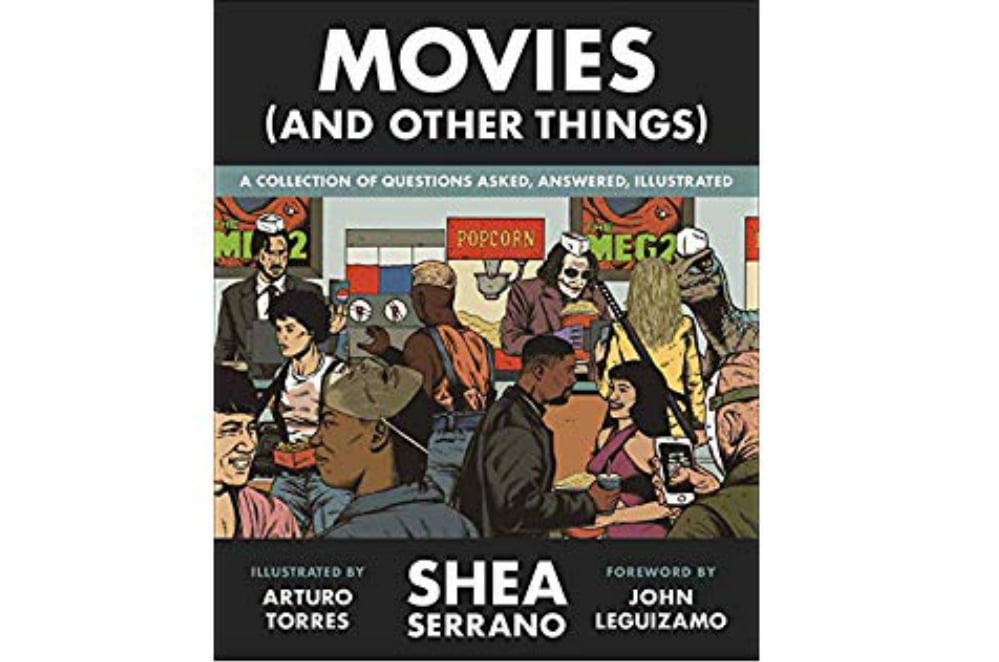 Given Shea Serrano’s overall enthusiasm for movies (and, sure, other things), it’s hard to object to his new book Movies (And Other Things). Even if his idea of movies is severely circumscribed here by a number of factors—the year of release (there’s little mention of films pre-1980), country of origin (American films only), and box office popularity (play the hits!). That enthusiasm counts for a lot though, especially when Serrano goes all-in on a bizarre idea.

Those bizarre ideas are what sells the book. Each chapter of Movies (And Other Things) has Serrano posing a movie-related question and then attempting to answer it. While the cinematic ground he covers is narrow, the book’s questions stretch across a wide range. There are some familiar ideas (ranking gangster movie moments), other singular queries (which movie villain would be a good hang?), and then there’s the truly random (comparing Face/Off and Finding Nemo). With help from colourful illustrations from Arturo Torres that jive with the mix-and-match nature of the book, Serrano gleefully bounces around the cinematic universe of his mind, going deep on movies he loves, and explaining why certain films mean a lot to him. Sometimes this proves affecting, as when he reflects on Selena and A Bronx Tale; elsewhere it’s frivolous, like the chapter in which Michael Myers of Halloween fame holds a post-game press conference. Again, the governing emotion here is enthusiasm. If you’re looking for in-depth or academic film criticism, look elsewhere.

Serrano’s book is at its best when he gets personal (in the main text or in his book’s many footnotes) and when his jokes arrive in unexpected ways. An example: In the chapter on Kill Bill, he describes falling off a ladder and landing flat on his back in the driveway like “a small cow had been dropped down to Earth from a helicopter.” It’s a funny bit and provides just enough insight into Serrano’s life that an interesting question emerges, one he doesn’t quite answer: what other other things could he address?