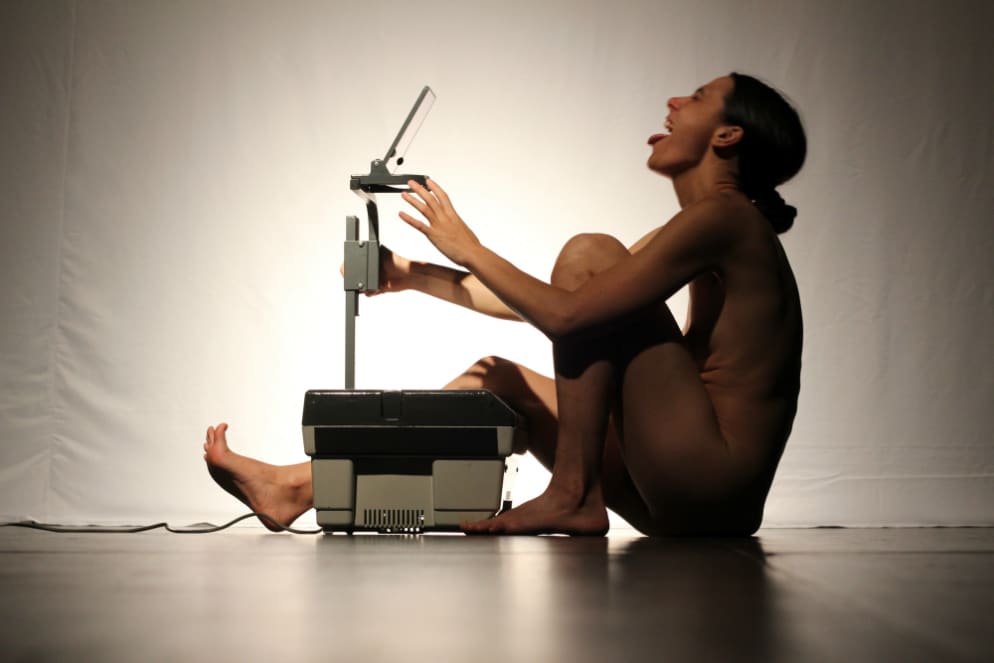 The show Multiple Organism (or Multiple Organisms, as many people called it in line), was highlighted early on as an interesting show. It was pitched successfully to me and my companion as we were in line for another show, by who we discovered is show co-creator Chloe Ziner. The pitch was a soft one, but out we trudged to the 11 pm performance, (the late late show), and we are glad that we did so.

The show is a difficult one to parse, but let’s just say that if the band Dirty Projectors hadn’t taken the name, that could have easily been a good one for the show, although it’s really about way more than projections. We are introduced the creator of the show, the other one, Jessica Gabriel in a state of undress, (or as Ziner puts it, “you’ve come to see the naked lady show. Pervs!”) but there is only one projector setup that involves this level of nudity.

On the other one, Ziner and Gabriel take every day items, mainly bathroom items, and somehow make them seem extremely charged with meaning, using mostly projects and puppetry. It’s so strange that by the end, Ziner seems more on display than Gabriel, as a stage speech is quite revealing, whereas Gabriel doesn’t speak much until the very end, communicating mainly through gestures and baby talk. There is so much of an undercurrent of gender identity and normality and convention smashing, that Vancouver’s Mind of a Snail Puppet Co. make a couple of dirty projectors into high art.

Be prepared to explore the nature of abstraction and conceptualization, or perhaps don’t, but it’s not the kind of show that can be missed. The ultimate performance is sure to make an impression, either figurative or literal.

No Place: TO Fringe Review