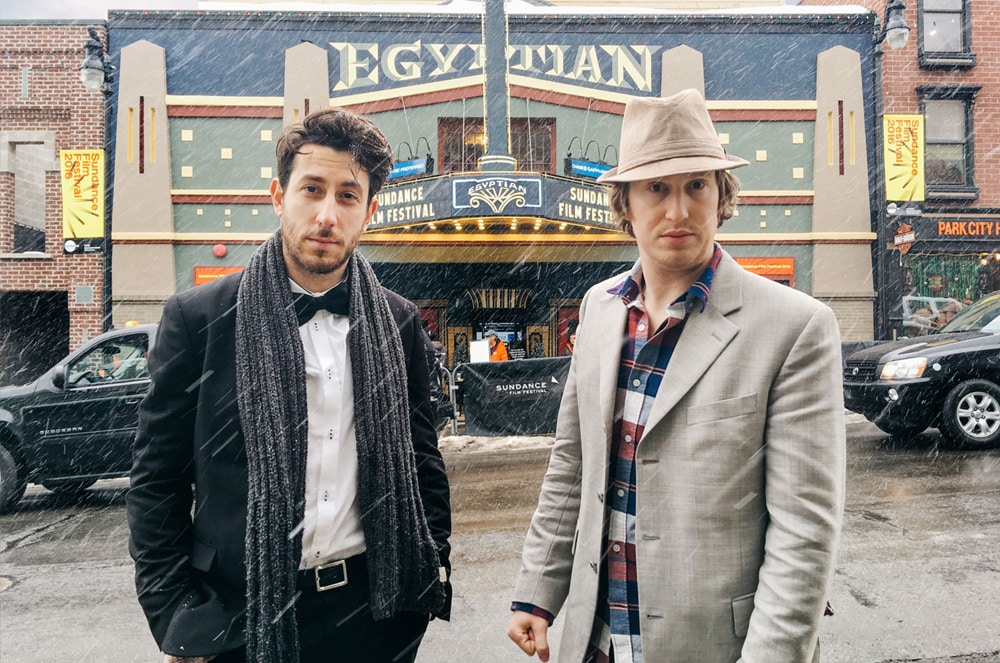 Matt Johnson and Jay McCarrol come by their enthusiasm and behaviour naturally. They are scheduled to call us, and when we don’t answer, the message that they leave on our answering machine is pure material. They’re clearly not putting on a show in their popular TV Show, nirvanna the band the show. This isn’t some act that they’re putting on, although Johnson is slightly quieter and McCarrol slightly louder than they appear on the Viceland program. This Thursday’s episode, The Buffet, in which Jay theatrens to quit “the band”, recalls both My Dinner with Andre and Flight of the Conchords (as well as Borat) and plays on quite a few other sources as well.

Essentially, the show is chockfull of Easter Eggs in terms of references but also locations. We spoke to Johnson and McCarrol from an undisclosed location about the cult of fandom for this quirky enterprise.

Brief Take: You have a rabid fanbase. Do you think it’s because you’re playing versions of your own selves and shoot in Toronto? It’s almost like you’re augmented reality. You guys are like Pokémon GO.

Jay McCarrol: It is like augmented reality a little bit.

Matt Johnson: In some instances we’re like a facsimile of the audience. We stand in for the lives of the people who watch our show.

BT: Then they can jump in and feel like a part of the crew.

MJ: Actually, that’s true. I don’t know how conscious that is, but I totally and completely agree with your reading. I think that’s quite smart. But, what’s funny is that when Jay and I are making the show, we’re not thinking…we’re actually thinking about the opposite, oh like nobody is going to follow this and nobody is going to understand what we’re talking about.

JM: Or at least it’s specific, like one person is going to love this or understand what we’re talking about. We don’t know how many other people are going to get this inside joke that we’re making about Goldeneye 64.

MJ: But because we understand it so well, and we’re trying to play to each other’s interests all the time, it helps us a great, great deal. Like a great deal. There’s a Kaufman quote for who he was doing his stuff for, that it was so inside, he said “I’m working for a very select group of people, who know what I’m doing”. I know that a lot people are going to say “this is the stupidest shit I’ve ever seen in my life”, and I’m okay with that.

For Jay and I, our job is to make the show. How people respond to it, we’re less interested in that. We believe that people will find it and respond to it, and that might be now, and may be five years from now.

BT: But it clicks with some people…

MJ: And that’s why we make the show. There’s no better feeling in the world.

JM: And I think you said it Matt, where if you watch anyone who connects with the show, and just gets everything, that automatically means that we’re going to be good friends because the show is such an extension of our lives, and things that we’re fond of, like we don’t fake anything, like there’s nothing like “oh, it will be funnier if they’re obsessed with this, or this is from their childhood”. It’s all real, and so if anyone laughs at it, we’ve got a lot to talk about, we have a lot in common.

BT: What do you think of tonight’s episode?

JM: We’re trying to show as much range as we can to the city. There’s a lot of Toronto and a lot of different people here.

MJ: Yeah, I think that Jay and I never thought “the inside of a Mandarin would make a good TV show”, but as soon as we started it, we said “oh that is very interesting” to show it off if we can. They stopped doing their Canada Day promotion a few years ago, so what inspired the episode doesn’t even exist anymore.

BT: I can only imagine what is happening in the next episode, as you mention guns, I’m immediately thinking of The Dirties.

MJ: I think that you may be on the right track.

MJ: Well, pretty good so far, they’re pretty hands off. We get to make the show we like, the show that we want to make, and we don’t get any notes from them. In that sense, it’s a dream. Our executives are one hundred percent supportive.

JM: It’s still in its infancy, the channel. So there’s some challenges with a network finding its footing. It definitely helps when we’re asking people for favours.

BT: So if you want Adrian Grenier to be on your show…

JM: Nope, he had no idea and it was sort of under the table, Vice or no Vice..