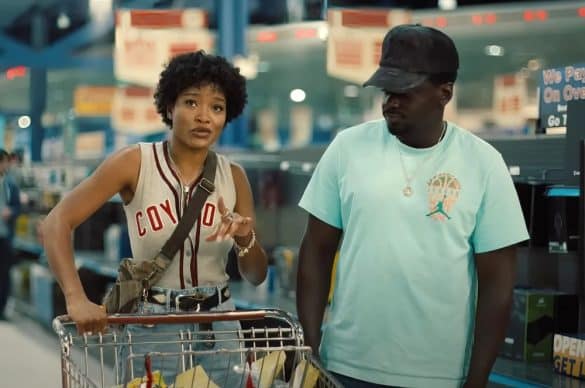 Jordan Peele is one of the best filmmakers working today and his films since Get Out—a deserved smash hit success—don’t entirely work. Both of these statements can be true. Peele’s latest, Nope, is another genre exercise that sees him continuing to grow his well-earned ambition to Spielberg-ian proportions. It’s also a thrilling, scary, and at times astounding film—and yet, I can’t say I love it.

Nope centres on OJ (Daniel Kaluuya) and Emerald (Keke Palmer), siblings in a Hollywood horse-training family business (run by their father, played by the always welcome Keith David) that has seen better days. On this showbiz periphery, they share their valley with a former child star, Ricky (Steven Yuen), who operates a western-themed amusement park built around his faded glory. There’s also—well, to say more would spoil it; let’s just say this trio, and others tossed into the mix, soon have company. The film’s management of that particular mystery is its definite strong point, one Peele is able to twist in different directions to varying degrees of success. (A subplot involving a chimpanzee is a terrifying, albeit awkward fit.) Nevertheless, as his films have grown in scale, with this one exceeding the bounds of the last, there’s a remarkable economy to the images here—even the ones capturing all that foreboding night sky. Aided by cinematographer Hoyte van Hoytema, there is no doubt this is the most visually accomplished film Peele has yet made. He also gains support from Kaluuya and Palmer, whose performances stay foregrounded in the action even when their characters (along with others) get left behind by the film’s script.

This is once again the rub with Peele’s work: it feels both hyper-aware and somehow lacking. As with Us, there’s the nagging sense he’s still chasing something, be it the moment or a metaphor, to wrangle some grand vision together. That Peele comes close (again) is as laudable as it is vaguely disappointing. Yes, Nope is a wild ride, but there has to be more out there.

Win Run of Engagement passes to The Gray Man!