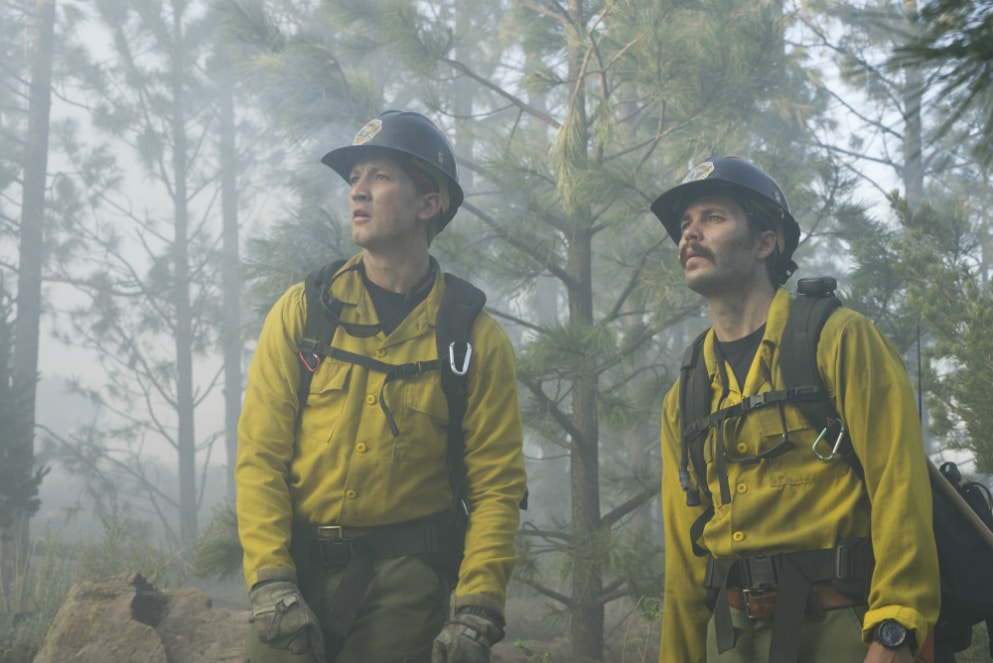 Only The Brave, (formerly titled Granite Mountain Hotshots), is a mostly standard biopic based on a GQ article (yes, you read that correctly), but where Only the Brave (generic title aside) is successful is that it presents a straightforward account of bravery and brotherhood and doesn’t preach or moralize. The film is most successful if the ending is unknown to the audience, though certainly those familiar with the story can find some relief in a film with no real antagonist other than wildfires.

Though it’s not clear at the beginning, (it almost seems to be telling a parallel story), the protagonist of the story is Brendan McDonough, better known as “Donut”, who is a real messed-up individual at the beginning of the film. In fact, we first encounter him in a haze of pot smoke, a burn out with a pregnant former girlfriend who can’t seem to do much of anything. That Donut is played by Miles Teller doesn’t help, as Teller is perhaps ten years too old (and obviously not blond), but eventually we settle in with Teller on his transformation. What is not in question is Josh Brolin’s performance as Supe, the older mentor figure (think Bruce Willis in Armageddon), or better still, Jennifer Connelly as Amanda, Supe’s wife. Connelly has a plotline of her own bringing healing injured and mistreated horses to the forefront, an apt metaphor for what is to come.

Sadly, we don’t become familiar with many members of the unit other than Taylor Kitsch as hotshot Chris MacKenzie (who also settles in rather than channeling James Franco) and second in command Jesse Steed, played by James Badge Dale. Otherwise, the Hotshots are mainly uniform, and best of all is Jeff Bridges as the supervisor Duane Steinbrink (who gets to dust off his Crazy Heart-era singing and guitar playing), and Andie MacDowell as his wife Marvel. More of them, please.