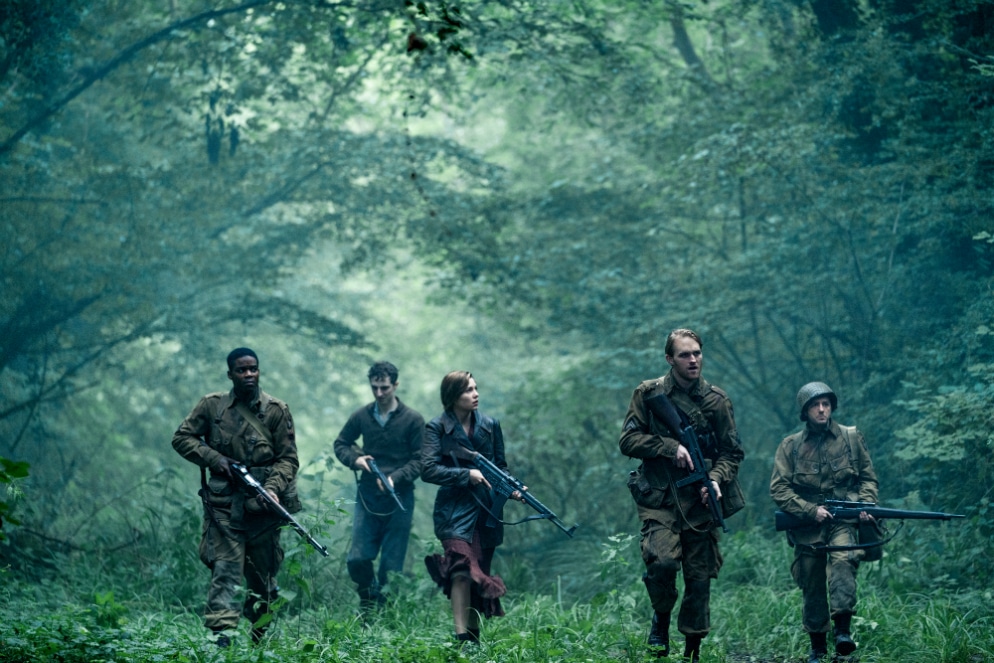 Is Overlord a pro- or anti-war film? Maybe that’s a silly question to ask of a movie that goes in some, uh, abnormal directions. The film, directed by Julius Avery and co-written by Mark L. Smith and (Oscar nominee) Billy Ray, is indeed set during World War II in a tiny French village on the eve of the D-Day invasion. We’re harnessed to a small band of soldiers on a mission to take down a radio tower installed in a church. As expected, there are moments of extreme terror and violent satisfaction—there are also undead mutants. Pro- or anti-war? Perhaps it’s hard to say.

Since this is a J.J. Abrams-produced picture, Overlord has a certain professional sheen. It opens on a plane bound for the continent, paratroopers at the ready. We meet the gang: innocent Boyce (Jovan Adepo), wiseacre Tibbet (John Magaro), haunted Ford (Wyatt Russell), and a few more. Their landing is explosive (to say the least), they connect with another archetype, the tougher-than-she-looks Chloe (Mathilde Ollivier), meet the nefarious villain Wafner (Pilou Asbæk), and then let the plot get to work. To the film’s credit, this is all effectively done, with Avery ably moving the action through town and country—and a secret Nazi lab—with force. The actors, meanwhile, hit their marks and sell the story; their characters aren’t much more than clichés marching to the script’s drum, but we root for the good guys to succeed and get out alive (while hoping the evil Nazis get theirs). There’s not much else here that’s a surprise—even the surprise.

Which is ultimately what makes that pro/anti-war question moot. Overlord is a video game presented as a genre exercise. It ticks a few boxes to earn its grizzly war/thriller/horror bonafides, but outside these mashup qualifications what else is there to even consider? We come out with exactly the same knowledge we had going in—war is hell, Nazis are bad, don’t toy with the laws of nature. Unlike the best genre films, Overlord stands only for itself.