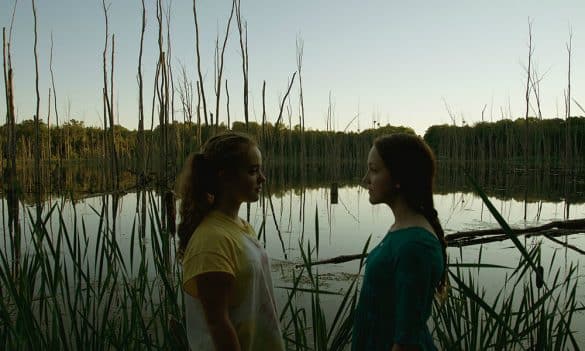 There is much to enjoy about Ingrid Veninger’s Porcupine Lake, from the acting ability demonstrated by its lead, virtual unknown but talented performer Charlotte Salisbury, to its messages of tolerance and acceptance. In fact, the story of two preteen girls discovering their romantic feelings for each other flips the switch, as country girl Kate (Australian actress Lucinda Armstrong Hall) is the aggressor, the wild child with worldly experience, and city girl Bea (the aforementioned Salisbury) is very inexperienced.

Had Veninger kept her focus solely on the pair, developing their feelings for each other and the world in an attractive setting, Porcupine Lake may have felt a little less prickly. But some of the supporting characters and subplots, especially those involving violent and destructive male figures, seem to ring false and almost cartoonish even. The characters act in a way that suggest that their actions are motivated by an attempt to pull Kate and Bea apart, which is oh so unnecessary when they clearly bring out the best in each other.

Porcupine Lake opens in Toronto at the Imagine Carlton Cinema on February 23 and will play daily at 2pm and 7pm. Ingrid Veninger will be on hand opening weekend doing a Q&A Friday/Saturday/Sunday at 7pm