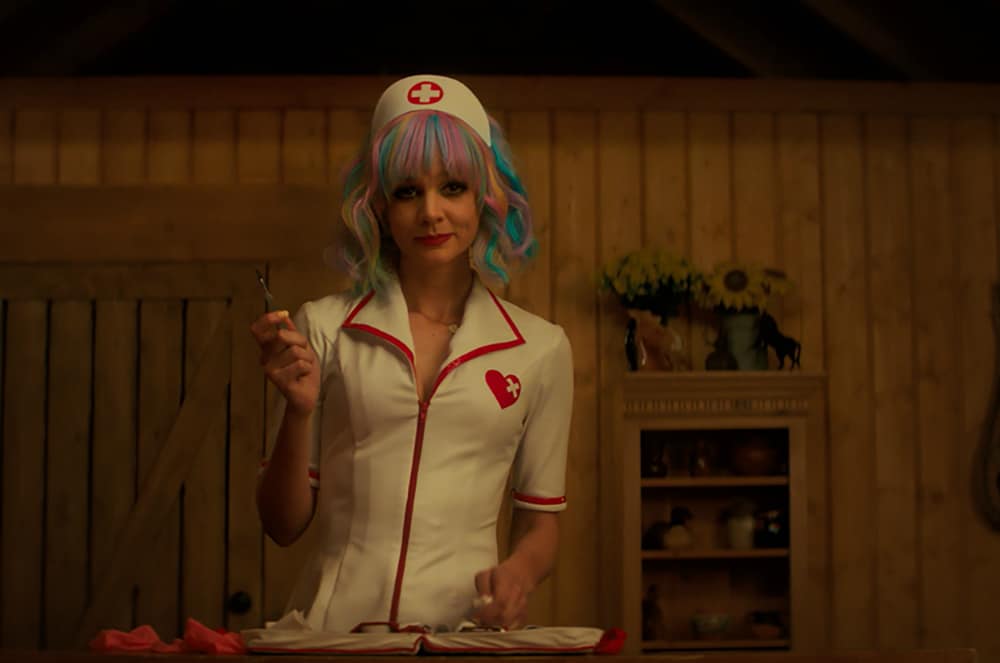 Pitched at a horror movie tenor, writer-director Emerald Fennell’s Promising Young Woman is more insinuating than outright frightening. It still provides many reasons to feel unsettled, however. To her credit, Fennell knows exactly what she’s doing here, and gleefully knows we know. This starts with her film’s upending of the expected source of terror: yes, men loom large, but it’s a woman, acting as both predator and prey, that gives the film its edge.

Built on its central flinty performance from Carey Mulligan, Promising Young Woman is a well-crafted revenge film. Using the same points of the so-called #MeToo era, it sets out to attack various facets of our patriarchal society. Mulligan’s character, Cassandra, exists in a world in which (like ours) we’re more aware than ever of the concept of, say, rape culture, but unable to affect real structural change. Well, almost unable—the film is sure to literalize those attacks too. As it turns out, Cassandra’s chosen mission starts with luring men into sexual encounters and then confronting them with the facts of what they’re doing. She has a grander scheme, but Fennell rolls that out with care. Along the way, her film deploys easily summoned rom-com tropes, which serve to crank up the tension. After Cassandra has a meet-cute with Ryan (Bo Burnham, an ace casting choice), we’re conditioned—by the film and reality—to expect some other shoe to drop. We’re pulling for a happy ending, of course, but we know that won’t quite happen—at least not in the way we expect.

At its most effective, this is what Fennell’s Promising Young Woman understands at a bone-deep level: the no-win situations women often find themselves in when speaking truth to power or confronting the institutions supposedly designed to keep them safe (even the tenets of the rom-com). Fennell’s work here is slick, yet it still arrives at an epitaph that’s enough to make one choke. And if that makes you uncomfortable—particularly if you’re a man—it’s best to ask yourself why.