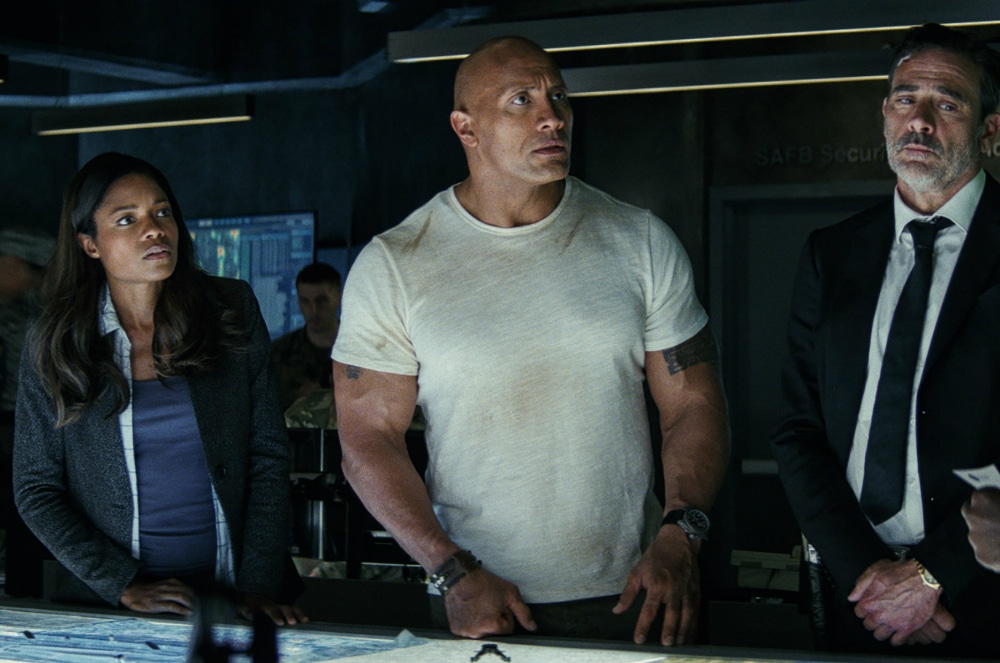 Bigger isn’t necessarily better when it comes to Rampage, the latest big-screen video game adaptation that’s about as captivating to watch as a teenager angrily smashing buttons in an arcade. The movie certainly captures the central concept of the game (a genetically mutated gorilla, werewolf and lizard destroy everything, and everyone, in their paths in Chicago) but without an emotional core (or much of a plot really), the mass destruction on display becomes repetitive and as visually nauseating as the Transformers franchise.

Dwayne “The Rock” Johnson plays primatologist Davis Okoye, a burly man more connected with endangered animals than the humans he works with (including Jack Quaid, P.J. Byrne and Frontier‘s Breanne Hill, all of whom disappear from the film once the action starts). One night a mysterious substance oozes out into the conservation area and soon Okoye’s beloved albino gorilla friend George (played convincingly by Terry Notary-trained mo-cap actor Jason Liles), a wolf and a Godzilla-like lizard are transformed into enormous, combative destruction machines. The less said about the evil corporation, led by a ridiculously wigged and even more ridiculously plotted Malin Akerman and Jake Lacy, who manufactured the substance, the better. It’s up to our hero Davis, disgraced geneticist Dr. Kate Caldwell (Moonlight‘s Naomie Harris) and Negan-like government agent Harvey Russell (the always charming Jeffrey Dean Morgan) to locate the antidote and rescue what’s left of Chicago.

Leads Johnson, Harris and Morgan (and even Liles’ George, when he’s given acting material to work with) elevate the movie with their winning personas, I just wish the team of screenwriters and Canadian director Brad Peyton (San Andreas) were as interested in them as the CGI mess that surrounds them at all times.