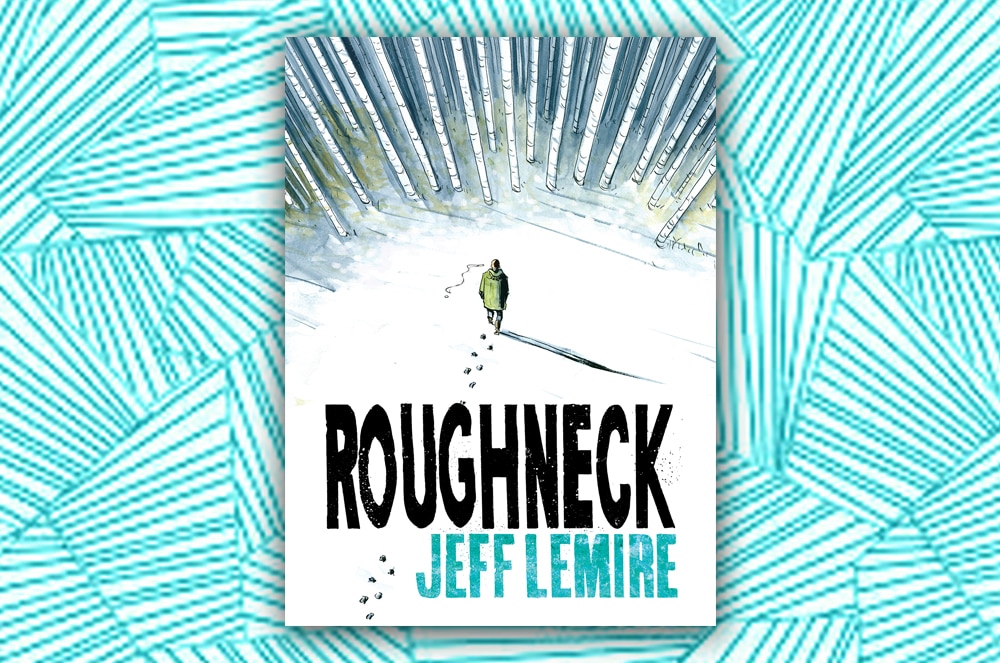 Jeff Lemire is a proponent of the “show don’t tell” school of narrative, which, for a graphic novelist, is a good school to be in. Lemire’s repressed and laconic characters speak in terse, clipped sentences, leaving the reader to look beyond the dialogue and glean from a foot crunching against snow, a dog barking, or an ever so slight crack in a painted-on scowl.

Roughneck is a return of sorts to Lemire’s Essex County Trilogy roots following work with a variety of major comics companies (including Marvel and DC) and a collaboration with Gord Downie on his Secret Path project. Like that multimedia project, which focused on Canada’s shameful history of residential schools, Roughneck complicates a popular conception of Canadiana at a time when the country is at its most jingoistic. The book follows Derek Ouellette, a disgraced former NHL tough guy who now spends his days living at a hockey rink in the fictional northern Ontario town of Pimitamon (or “The Pit”), drowning his sorrows in alcohol and the fist-drawn blood of anyone who disturbs his peace.  Into his life comes his long-estranged sister Beth, seeking an escape from her abusive partner who comes looking for her. Together, they seek refuge at a nearby First Nation and discover their Cree heritage they never knew much about.

Mirroring the tragic real-life depression of former hockey enforcers such as Derek Boogard and Wade Belak, Roughneck paints a vast and bleak portrait of Canada’s NHL-sanctioned bloodlust, casting rural Ontario in hushed blues and greys interrupted only by the occasional blood-red colour palette of flashbacks and bar fights. It’s like Fargo meets Hemingway meets Goon, raising tension for a violent climax that by the end is subverted.

For a revisionist view of Canadian culture, Roughneck occasionally loses its nuance, especially in the broadly drawn villains that burst their way into the story’s current and past timelines. And Lemire, who claims no Indigenous heritage himself, and who has cited Joseph Boyden as an influence, occasionally tiptoes towards the “noble Indian” cliche. Overall, though, it’s a tense, subtly drawn story that sticks with you past the final page.

Roughneck was provided by Simon and Schuster Canada in exchange for an honest review. It may be purchased from your friendly independent bookseller or other fine bookstores.