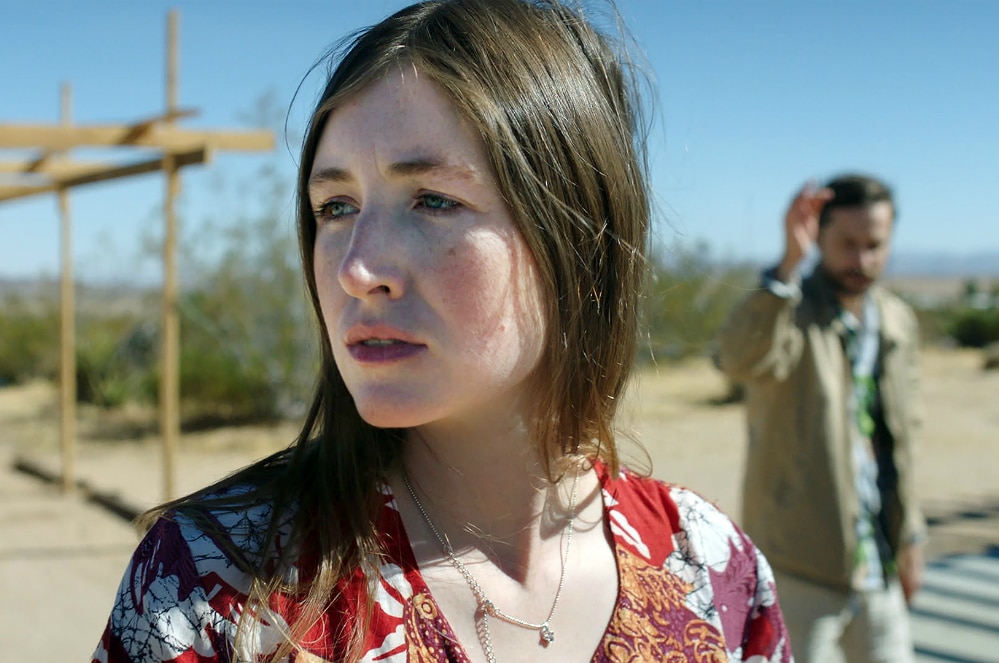 From its title on outwards, She Dies Tomorrow is an unsettling—and unsettled—experience. The new film from writer-director Amy Seimetz tracks the unravelling lives of a handful of people, approaching each of their situations in ways that feel familiar yet alien. While her film is not quite a full-on horror show, it does coalesce around a simple unseen and unquantifiable fear: we are indeed all going to die. What could be more upsetting than that?

The centre of She Dies Tomorrow is Amy (Kate Lyn Sheil), a recently relocated woman and recovering alcoholic. She’s not quite the film’s patient zero, but she is the vehicle for its unnerving contagion narrative. While the rest of the film moves ahead linearly, we see flashbacks to Amy’s past, coming to understand her current state. Along the way, we meet her sponsor Jane (Jane Adams), an artist on her own journey, the married couple of Jason (Chris Messina) and Susan (Katie Aselton), and others in their wake. What these people have in common is what we’re all clinging to: life, and a desire to keep living it. Seimetz’s film acts then as a solvent, dissolving the membrane between carrying on in one’s self-involved little world, to becoming consumed by its sudden end. As a result, the film oscillates between the absurdity of this exchange, juxtaposing darkly comic moments (as when a couple, played by Tunde Adebimpe and Jennifer Kim, decide to confront each other) with scenes of straight-up darkness.

It’s hard to say She Dies Tomorrow is an enjoyable experience per se, but it is an inventive one. What’s more, Seimetz layers the film in such a way to invite repeat viewings. You may find yourself eager to re-watch to see how these jagged little pieces fit together and to appreciate just how much craft has gone into their assembly. Of course, the film’s real trick is making something that feels known and unknowable at the same time. It’s absurd to know you’ll die tomorrow, but what if that’s true? Yikes.