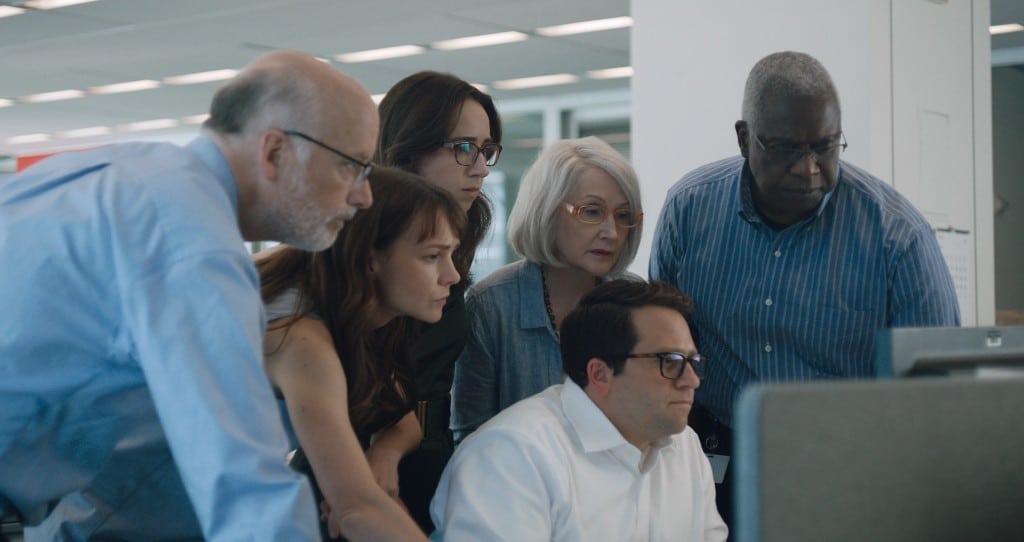 The opening worry with She Said, which visualizes the New York Times’ investigation of Harvey Weinstein, the notorious producer now behind bars after decades of abusive behaviour, is that the film would consider itself an end—not a beginning. After all, there’s nothing Hollywood and media companies, both very present here, like more than patting themselves on the back for a job, done.

As directed by Maria Schrader and written by Rebecca Lenkiewicz, She Said doesn’t entirely escape that feeling. The initial hook of the story is the role celebrities have in it—Rose McGowan, Gwenyth Paltrow, and Ashley Judd (appearing as herself) are name-dropped early. Nevertheless, led by Zoe Kazan and Carey Mulligan (as NYT reporters Jodi Kanter and Megan Twohey, respectively), the film sets out to establish the rigour necessary for such a significant journalistic case, one in which the threat of violent reprisal looms. In this, all the little details (and people) matter, despite the attention paid to bigger names and how blatant the evil now looks in retrospect. So, while there’s no doubt who the villain of the film is, or even how men like Weinstein continue to escape justice—which makes for a somewhat slow first half, particularly in the film’s antiseptic NYT office scenes—there is the question of how to get people to talk. Once the film finds its sources, however, it also finds its voice, unleashing an emotive force that much like its narrative becomes difficult to ignore. Credit here goes to Samantha Morton, in particular, whose one scene jolts the film toward its satisfying conclusion.

It’s also difficult to ignore that all journalism movies are, in a sense, chasing All the President’s Men, one of the genre’s best modern examples. Schrader’s She Said doesn’t have that frisson and personality, yet her choices still vibrate with a certain strength. She’s relaying the story about the story, but also an ambient idea about all the stories yet to be told. This is a film about one man, yes—and many, many women too.