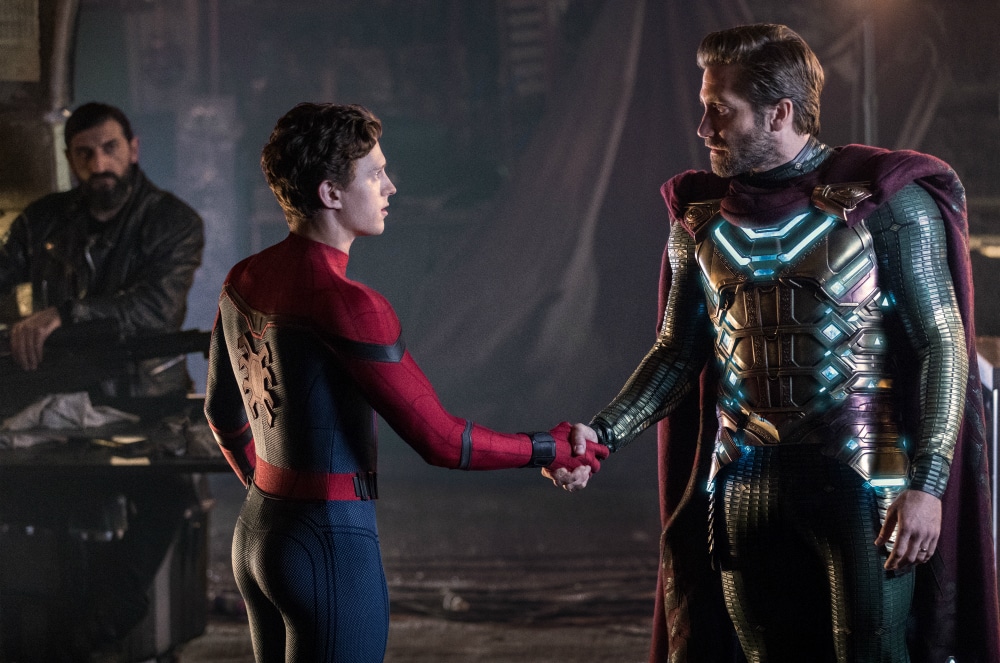 Spider-Man may be down a mentor and well out of his comfort zone in Spider-Man: Far From Home, but he can never escape the Marvel universe. As directed by Jon Watts, that’s the main thrust of the film, the first post-Endgame, left to deal with its Thanos-incurred fallout. Of course, now you see the problem in trying to discuss this movie on its own terms. Without understanding who Peter Parker is or what he’s been through lately—fighting to salvage the galaxy, losing father figure Tony Stark, etc.—it’s difficult to even know where to start. Like Spidey, let’s gamely try anyway.

Fresh off helping to save the universe, Peter (Tom Holland, an eternal teen) is due for a European vacation. If the film remained merely that, a teen road trip comedy, it could have been enough. Watching Holland, Zendaya, Jacob Batalon, veterans Martin Starr, JB Smoove, and more, getting up to all sorts of hijinks is a pleasure. Will Peter be able to tell MJ how he feels? Will Ned (Batalon) get to be a “bachelor in Europe”?—and so on, thanks to the script from Chris McKenna and Erik Sommers. But a new threat emerges, one that has Nick Fury (a cruising Samuel L. Jackson) calling for Spider-Man. He and the newly arrived Quentin Beck (Jake Gyllenhaal, playing to type), must join forces to destroy force-of-nature elementals moving across the continent. It sounds like a goofy Saturday morning cartoon plot—and it is—but it acts as a springboard into more interesting (and, weirdly, knowing) territory. It’s considered a spoiler to go any further, so I’ll just add: Gyllenhaal’s Beck is known as Mysterio, which explains… something. It’s easy to predict the rest from there.

The best of Marvel’s movies, indeed the effect the company has worked a decade plus to achieve, is this kind of expected sitcom-y excellence. Sure, the films require action setpieces—Watts’ are acceptable enough—but the interplay between characters is what sells them. Mixed with the comic book ethos of high stakes and resettable conclusions, Far From Home fits right in. It’s possible to be disappointed in that, to want more. Or we can just shrug our shoulders and prepare for the next episode.