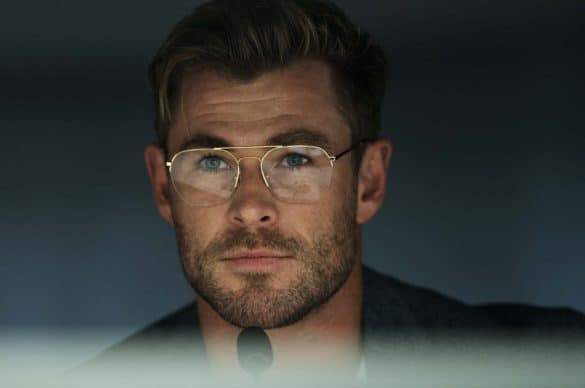 On paper—which is where it began as a short story by George Saunders—Spiderhead positions itself as a heady film in which a simple premise explodes in the mind with implication. As directed by Joseph Kosinski, we’re asked things like: What if drugs could make us do and feel different things in seconds? And then: what happens to free will as a result? Potentially far-out stuff. In the parlance of our times, though, the film only manages to be mid.

Housed on an island compound of impressive design, Steve Abnesti (Chris Hemsworth) oversees a curious prisoner program. In exchange for relative comfort during their reduced sentences, inmates like Jeff (Miles Teller) undergo experimental drug treatments with side effects ranging from extreme terror to overt arousal. Steve’s operation has obvious (if shady) commercial applications, but still, it seems like a fair deal—and his playlists feature heaps of smooth Hall & Oates-type jams, so why not just roll with it? As adapted and expanded by writers Rhett Reese and Paul Wernick, complications ensue; in part, because Jeff falls for fellow inmate Lizzy (Jurnee Smollett), but mostly because even despite Steve’s jocularity, the moral equations of his entire project stop adding up. To Kosinksi’s credit, his film slides easily through its exposition while generating the requisite sense of dread for his film’s second-half twists. That slickness, however, is both feature and bug. And just as Hemsworth’s performance as a “progressive” tech boss is as surprising as it is near-perfect, it too draws attention to how basic many of the film’s other narrative and thematic elements turn out to be.

On that note, it’s funny that the delicate hi-tech drug intake devices fitted to most of Spiderhead‘s characters are installed at the base of their backs. For all the attention to detail in its broader production, to say nothing of its potent star power in front of and behind the camera, those gadgets provide a neat summary of the film: for most everyone involved, its complicated inner workings remain just out of reach.