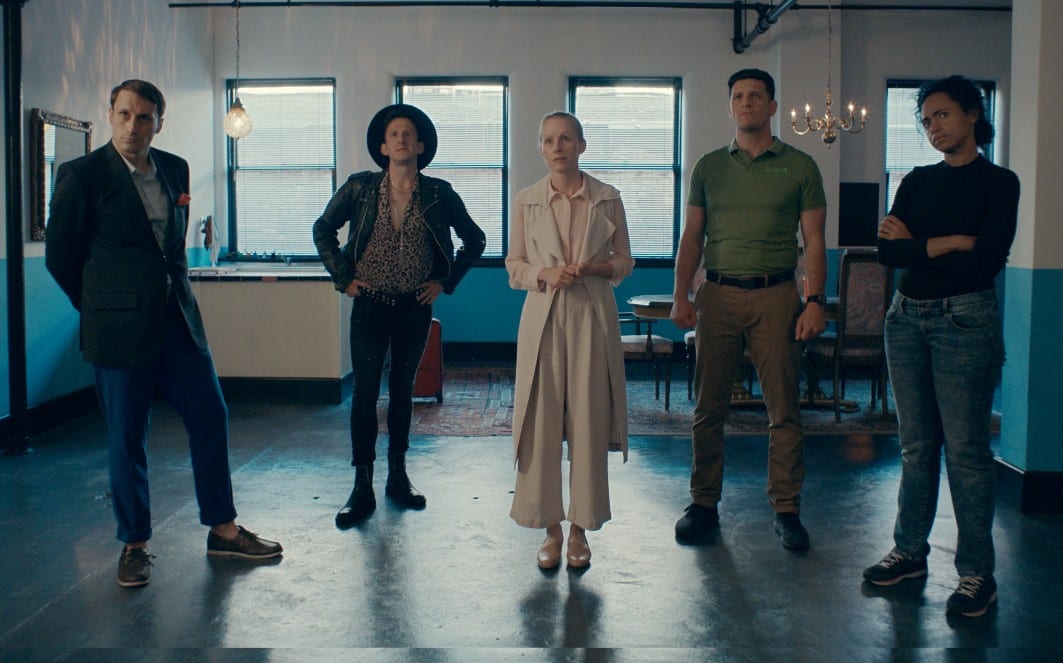 There is a point to Stanleyville, the new Canadian film from director Maxwell McCabe-Lokos, though it’s not easy to pin down. As co-written with Rob Benvie, that’s what gives the film its hook, its strange tone imbuing everyday objects and claustrophobic setting with ominous—if not deeper—meaning. There is the possibility of drawing all sorts of significance from McCabe-Lokos’ work; it’s also just as easy to note that his point is a tad dull.

In a flight of fancy (set off by a bird crashing into her window), a waxen office drone Maria (Susanne Wuest) decides to abandon her life and family. As luck would have it, she is soon approached by a man calling himself Homunculus (a memorable Julian Richings), who tells her she’s been chosen to compete in a contest for the ultimate prize: transcendence (and a new SUV). Maria accepts this setup, entering an apartment with four other reality show archetypes—e.g. the meathead, the drama queen, the schemer, etc.—looking to discover some profound truths. What follows as far as Stanleyville‘s narrative goes, however, only works in fits and starts, with the five contestants clashing amongst themselves (thanks to actors Christian Serritiello and Cara Ricketts) in between off-kilter interjections by Richings’ master of ceremonies. It’s telling that this is McCabe-Lokos’ first feature; he has an ability to frame scenes and nail punchlines, but his ideas here still seem better suited to a shorter format. In all, the film tries for the winning effect of Yorgos Lanthimos’ early work, yet only nabs itself a consolation prize.

For all its forced weirdness and vague allusions—the title, for example, is a specific reference, but why?—Stanleyville can only eventually settle into a place we expect. The contest comes to an end and our heroine Maria resolves something in her mind—even the gun that’s introduced in the first act gets fired in the third. That’s funny, sure, and part of the point too. But so what?

Win advance screening passes to Paws of Fury: The Legend of Hank!