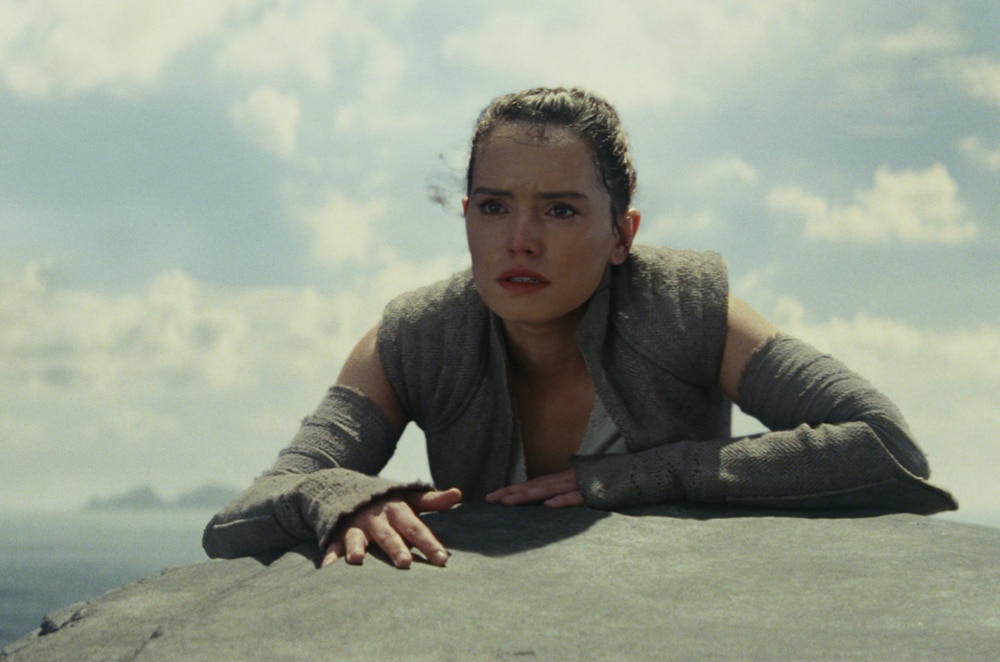 Previously, Episode VII seemed intent on recreating Star Wars for the next generation, but here Rian Johnson puts his stamp on a franchise that’s traded in nostalgia for far too long. When Kylo Ren shouts “let go of the past!”, we can almost see Johnson doing the same thing in Star Wars: The Last Jedi.

Starting with the crawl (it’s there, and does actually help fill the audience in on the story a little bit), this new iteration actually does pay service to the franchise and still manages to shake things up a little bit. Poe Dameron (Oscar Isaac) is no longer just a riff on Han Solo. Daisy Ridley’s Rey, already one of the stronger characters in the canon, does a lot more than embody the female Luke Skywalker. John Boyega is breaking out of his role as the Leia of the franchise but is sadly saddled with a long road trip with new character Rose (Kelly Marie Tran).

We’re saddled with just enough Luke Skywalker and Leia Organa (Mark Hamill and the late great Carrie Fisher), and newcomers Laura Dern and Benicio Del Toro are welcome additions, though moreso Dern (despite some interesting underpinnings). Yet the surprise standout of the film is Kylo Ren (Adam Driver), who basically played Darth Vader in the previous film, down to the helmet. The character doesn’t expand so much as take the helmet off (more than literally), and he makes for a compelling villain, sympathetic without being pathetic. The less said about Domhnall Gleeson’s General Hux the better, C3PO, Chewbecca and R2D2 barely cameo, BB-8 is as cute as always, with BB-9E making a surprising appearance, and porgs!!! May the Porg be with you. Always.

Maz Kanata, instead of playing a poor man’s Yoda, has Lupita N’yongo phoning it in, (literally!), and the Wars part of Star Wars is certainly emphasized, in a bloodless bloody battle that is quite taxing, leading to losses on both sides (mainly offscreen). Oh, and there is a Donald Trump reference that seems to more implicit than explicit but still quite present. This isn’t your parents’ Star Wars, though it certainly benefits from change. 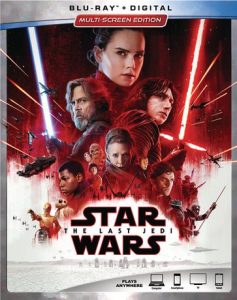 As we’ve now come to expect with all home entertainment releases of Star Wars films, the Blu-ray package is chock full of fascinating supplementary footage. I’m a sucker for a well-rounded, in-depth commentary track and the Rian Johnson audio commentary is one of the best I’ve listened to in a long, long time. I won’t spoil anything but there are some hilarious and surprising stories disclosed by the writer/director. The ‘Andy Serkis Live!’ special feature is 6 minutes of pure movie magic wherein you get to see behind the scenes of Andy Serkis’ astounding (and, frankly, award-worthy) mo-cap performance as Snoke.

Normally I don’t pay attention to the digital copy included in blu-ray packages but this one has a score-only version of The Last Jedi that is a must for all John Williams fans.

The Force is strong in this one.