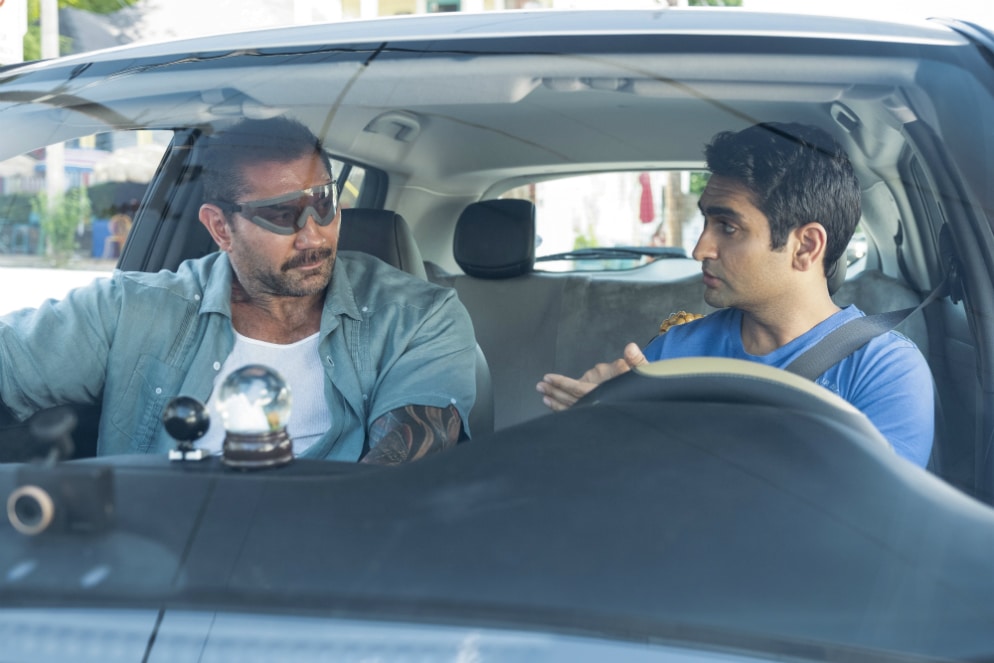 Have you heard the one about the visually impaired cop and the cowardly Uber driver? Given the relative newness of ride-sharing and Lasik-induced blindness, I’ll assume you haven’t. But read another way—mismatched characters, competing objectives, a tidy conclusion—you definitely have. In director Michael Dowse’s Stuber, this is the form: a seemingly original chassis strapped onto a vintage buddy movie engine. Do these parts combine for a trip worth taking? Well, your mileage may vary.

We begin with Vic (Dave Bautista), his dead partner, and his subsequent hunger for revenge on druglord Tedjo (Iko Uwais). Stu (Kumail Nanjiani), meanwhile, hungers only for Becca (Betty Gilpin) and is willing to be put-upon in two different jobs while waiting for her to notice. One of those jobs is, you guessed it, Uber driver, which grants Stuber its, uh, clever title, and puts Vic into Stu’s path. From there, the pair smash through a series of repetitive, shaky-cam action sequences, another mainstay of the genre. Whatever enjoyment can be wrung from these scenes is due exclusively to the talents of Bautista and Nanjiani, both of whom earn a few praiseworthy moments while bridging the gap between their characters. There are others to account for here, namely Vic’s boss McHenry (Mira Sorvino, out of nowhere) and his daughter Nicole (Natalie Morales, still looking for her lane). But that pair, along with the underused Gilpin, highlight a significant problem with the film. Despite Dowse’s ability to shape worthwhile character-driven comedies (see: Goon), he’s let down entirely by Tripper Clancy’s script and its overall lack of focus and detail. There’s just not a lot to see here along the way.

That absence—of real heart, or even just content—is the most irritating thing about Stuber. Despite its clear desire to tap into some Midnight Run energy, the film is unable to arrive at anything of substance. That aforementioned classic delivered plot, action, and character; in Stuber, most everything is just a mechanism, easily reverse-engineered—like an app. It’s given the interface of something more, yet its insides (like Uber’s morally bankrupt business model) are hollow. In any case, you already know my star rating.