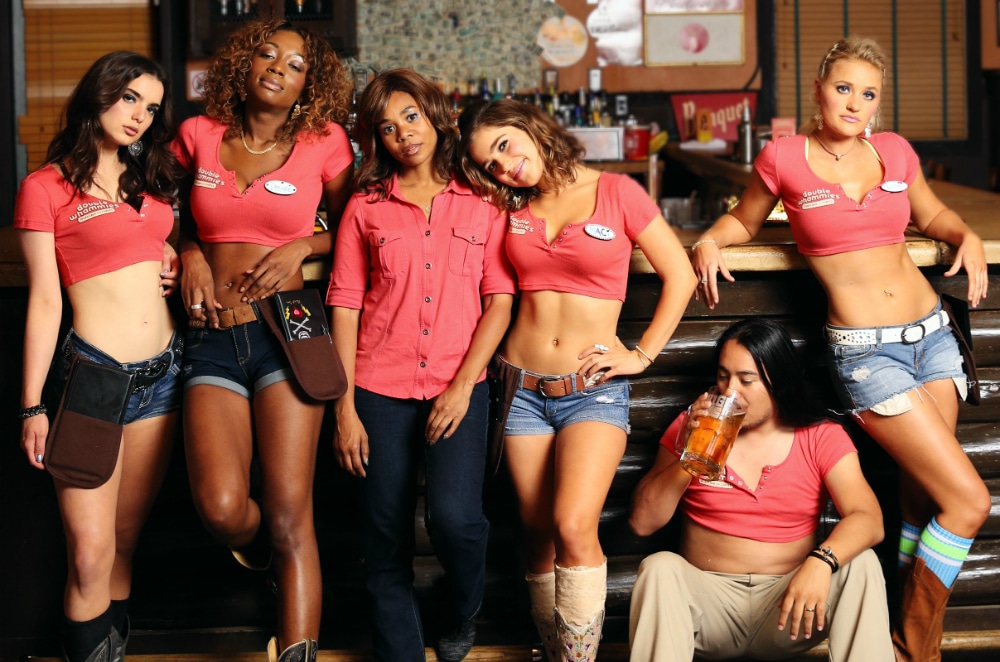 The cheekiness of Support the Girls jumps off with the title, an obvious play on words that suits writer-director Andrew Bujalski just fine. As with his previous work, this latest film’s energy is found in its layers of seeming randomness. There’s a plot, of course, and characters who create drama and comedy within it, except Bujalski consistently puts his finger on something only to let it wiggle away so as to watch where it goes next. In that spirit, the film opts away from easy innuendo, meandering instead towards something funny and heartfelt.

The first rule of working at Double Whammies, the fictional (yet familiar) restaurant in which Support the Girls is set, sounds simple: no drama(!). To overworked manager Lisa (a wonderful Regina Hall) however, this is impossible to avoid. She has to deal with a bevy of waitresses, including Maci (an incredibly game Haley Lu Richardson) and Danyelle (newcomer Shayna McHayle), various unruly patrons, and her demanding boss Cubby (a comfortable James Le Gros)—all before even facing life outside the workplace. The restaurant may sell an All-American good time fantasy, but its staff deals in reality. For Lisa, this means taking on one crisis after another while trying to maintain her smile. Hall’s ability to transmute her strained emotions here into generous and lively action is what sells the entire premise. It’s ironic then that she’s most recognizable from other familiar (film) franchises (Scary Movie, Think Like A Man), speaking to the lack of memorable roles like this waiting for someone like Hall. On that count alone, Support the Girls is worth watching—it’s not often this combination of cast and story is put together with such a charming and humorous touch.

Part of that pleasure comes from Bujalski’s loose style, which captures just what’s needed to move things along. If that means giving time to random bar patrons (like Orange is the New Black’s Lea DeLaria), or a curious bird in a parking lot, so be it. At one point, Lisa puts heart stickers on spots around the restaurant in a succinct, no-frills visualization of the film’s entire ethos—the personal fighting for space inside the impersonal. Bujalski shoots in these unremarkable places, yet draws love and attention to the vibrant people within them anyway. Thanks to him and his actors, we now know they’re there.