The Art of Self-Defense Review 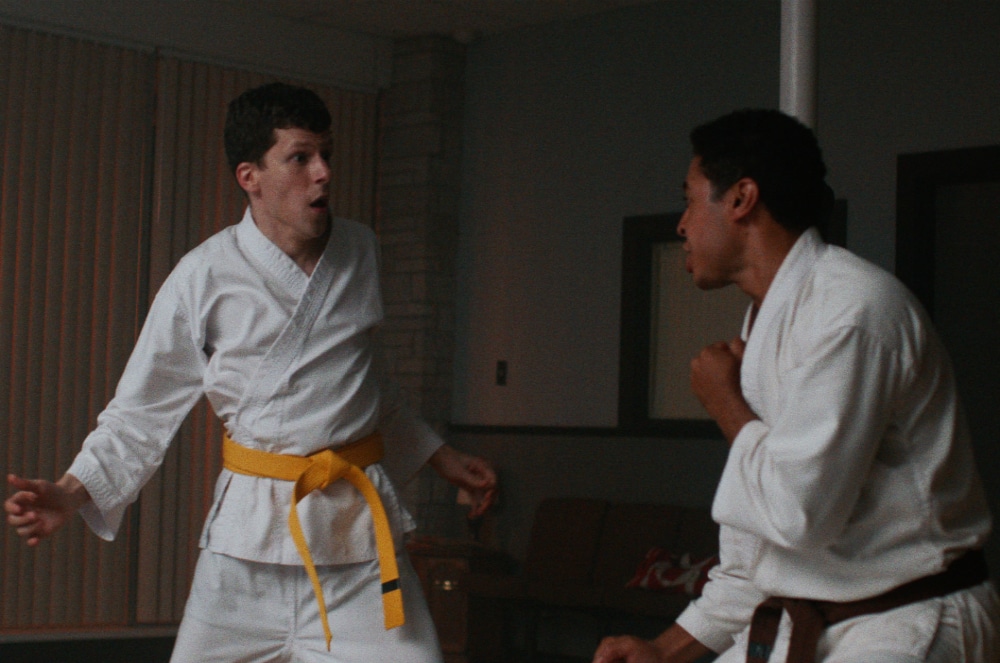 Who knows what danger lurks in those random plazas in nowhere towns? That’s the droll take-off point for writer-director Riley Stearns’ The Art of Self-Defense, a nondescript film that gradually slides into farce. Staged as one man’s awkward journey towards self-respect, the film instead dives in deep towards the toxic ends of masculinity. It could be Fight Club, but with lower stakes and Jesse Eisenberg as the star, the effect is different—pathetic, funnier, and more realistic.

Reality is not great for Eisenberg’s Casey though. He works as an internal auditor, has no friends (who aren’t his boss), and possesses interests that extend as far as learning French so as to “someday” go to France. After he’s attacked by a helmeted motorcycle gang, Casey’s desires change: now he wants karate. Enter Sensei (Alessandro Nivola), Anna (Imogen Poots), and their strange little fiefdom of violent weirdos. At their insistence, Casey begins to remake himself. To go further with any description of the film is to undo some of the unique delights of The Art of Self-Defense. Suffice it to say, Stearn’s narrative regime is singular, never missing an opportunity to jab at expectations. Yes, we’re watching Casey learn how to fight, but he’s also being honed into a bully. It’s not really karate he’s learning either, but when has that stopped any dude before—especially when challenged? For their macho duel, Eisenberg supplies his usual nervous energy, vacillating between harmless and something darker; Nivola, meanwhile, proves to be as adroit with a karate chop as a one-liner. How far both characters (and Stearns) go will surprise you.

Still, to repeat, forget Fight Club. The actual comparison to make here is to the work of Yorgos Lanthimos, Dogtooth in particular. As with that film, The Art of Self-Defense is stilted on purpose and follows its pitch-black comic logic right to an absurd end. In both films, something feels settled, a conflict reaching its natural conclusion—but what is that endpoint? Go ahead and look into the face of Eisenberg’s Casey, consider what Stearns has let loose into the world, and try not to worry.

Win advance screening passes to Dora and the Lost City of Gold!