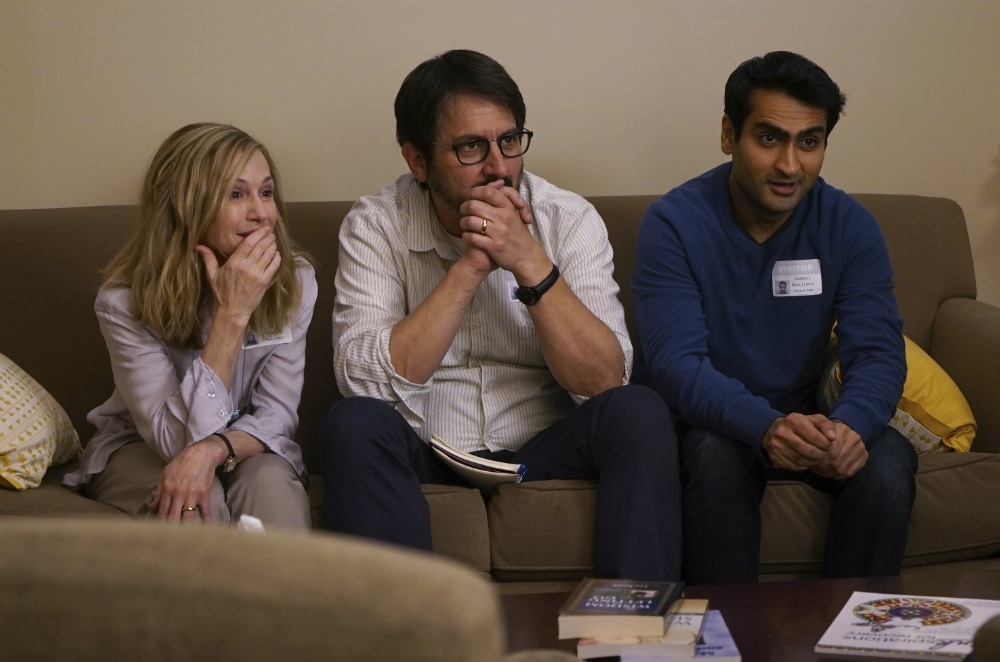 The Big Sick is about the story of a fascinating screen couple and their ups and downs in the course of an adult relationship. Of course, this is Beth and Terry (Holly Hunter and Ray Romano). Oh sure, Kumail Nanjiani and Emily Gardner (Kumail Nanjiani and Zoe Kazan) are fascinating as well, but the film signals the beginning of the Romanaissance as both of Gardner’s screen parents are wonderful, and especially Romano as the hapless Dad Terry, a Math Teacher who ironically cannot tell a joke to save his life. Romano has done this sort of project before (Everybody Loves Raymond, Men of a Certain Age), but he hasn’t been this good in a long time.

The film, directed by Wet Hot American Summer actor Michael Showalter, and produced by Judd Apatow, is a film that resurrects the romantic comedy, and will resonate with today’s audience. Nanjiani and Emily V. Gordon co-wrote the film and based it on their own experiences. But it is set in today’s time and features some aspects of the relationship that have been embellished for the sake of theatricality. The city of Chicago is featured prominently, as are the Chicago Cubs, and Nanjiani brings something to the role that is lacking from his portrayal of Dinesh on Silicon Valley (through no fault of his own). Kazan is decent as Emily in her limited screen time, but the film belongs to her on-screen parents, struggling with their own relationship. Though Gardner is in a medically-induced coma for the second half of the film, The Big Sick is just as much about a middle-aged couple’s relationship.

Some of the most memorable scenes of the film revolve around Nanjiani’s Pakistani-American parents (played by the winsome Anupam Kher and Zenobia Shroff) who keep meddling in their son’s love life. They insist that he marry a woman of their choosing in an arranged marriage, and features a great performance by Crazy-Ex Girlfriend‘s Vella Lovell as a particularly popular choice for a potential mate.

Nanjiani gets off some great lines, and the film is a tad too long (blame Apatow), but overall a healthy choice at the movies this weekend.