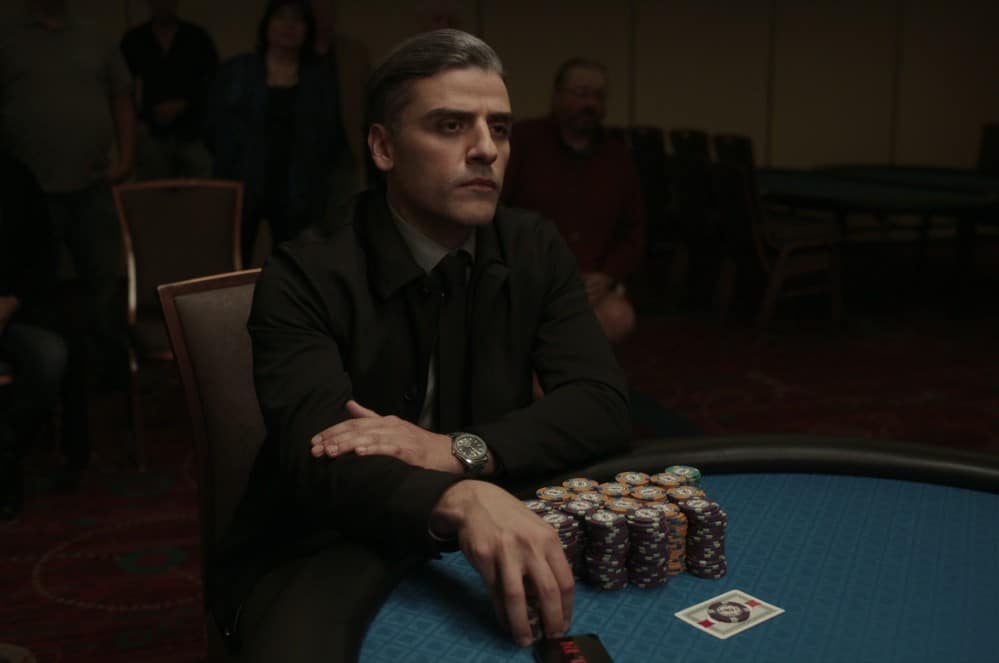 This isn’t unique to him, but writer-director Paul Schrader seems particularly unabashed about what inspires him to make films. With his latest, The Card Counter, it’s even possible to reverse-engineer how exactly he landed on this subject matter. For the past few years, Schrader has been steeping his brain in Facebook politics and playing online poker, while continuing, of course, to be consumed by guilt. Et voilà: a film.

The Card Counter stars Oscar Isaac as William Tell, a gambler winning low-stakes games across America and marking time. His pseudonym suggests he’d like to keep his past hidden, but we learn he was in a military prison as one of the disgraced soldiers at Abu Ghraib. As played by Isaac, Tell is an enigma who also burns with an all-consuming intensity everyone around seems to sense—if not read. (A voiceover from Isaac, another touchstone of Schrader’s, further clears up any ambiguity.) The film pivots on two chance encounters: with Cirk (Tye Sheridan), the son of a fellow now-deceased soldier, and La Linda (Tiffany Haddish), who offers to stake Tell to get him at some bigger tables. This isn’t a gambling movie though; in fact, as filtered through the dark eyes of Isaac, the stakes of any game we see feel remote and cosmically small. Schrader doesn’t care about that either, as he saves his greatest (or most horrific) visual flourishes for the action away from the casinos. Soundtracked in part by what sounds like an iron lung, we’re lead into something dark and then spend the rest of the film wondering if we’ll get out.

Schrader’s instincts aren’t always in the best of taste, but his convictions tend to earn him a pass. The Card Counter is almost comically affectless at times, going so far as to flatten some of Haddish’s natural verve. It’s also easy to criticize Schrader for once again leaving us with a loner in a room, drinking, thinking, and torturing himself. In that sense, this is not a cutting-edge film, but it does have a certain sharpness. And Schrader definitely isn’t afraid to play with the point.