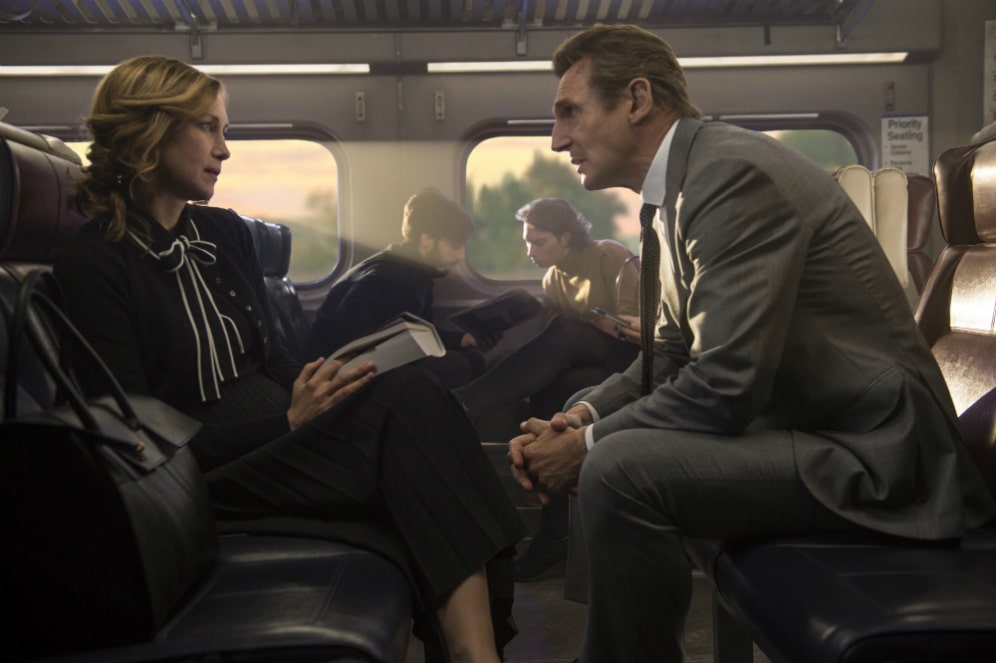 The Commuter is a movie that will take you to your next stop and where you need to be going, but don’t expect much more than this sort of perfunctory service.

Of course, the last time we saw Liam Neeson brawling on a commuter train in New York City it was as Ra’s al Ghul in Christopher Nolan’s Batman Begins. Now Neeson is back on the right side as ex-police officer Michael McCauley, in Jaume Collet-Saura’s The Commuter. This is the director’s fourth collaboration with Neeson, and the first in which the actor discusses being sixty (he’s sixty-five IRL).

If you’ve seen one of the movies, you know that in everybody’s a suspect roles, that far too famous actors aren’t usually in small roles, but of the following: Florence Pugh, Jonathan Banks, Patrick Wilson, Sam Neill, Dean Charles-Chapman (yes, Tommen from GoT), Elizabeth McGovern, Røland Moller, Letitia Wright and Vera Farmiga, there are some surprises.

Well, we can say that Farmiga, as “Joanna”, does offer Neeson’s Michael the opportunity to perform a series of tasks on his commute home in exchange for a lot of money. In fact, this is perfect timing, as Michael has just lost his job as an insurance salesman despite putting in the time and..hey, do you think that this might be going somewhere?! He accepts the task to approach a fellow commuter (but then sort of…uh…doesn’t). Then, like every one of these vehicles, Neeson endangers his family and threatens the person that will undermine their well-being. He really likes his family.

The film is a testament to the power of work and being thorough, so it will probably succeed in this regard, even though much of it makes very little sense from a realism perspective (why does Neeson know some of his fellow commuters so well and what kind of Metro-North commuter train makes such a strange path?). There are some good lines and the film shakes its fist at corporate America, so I guess it’s a timely film? Either way, it’s a pleasant enough diversion.