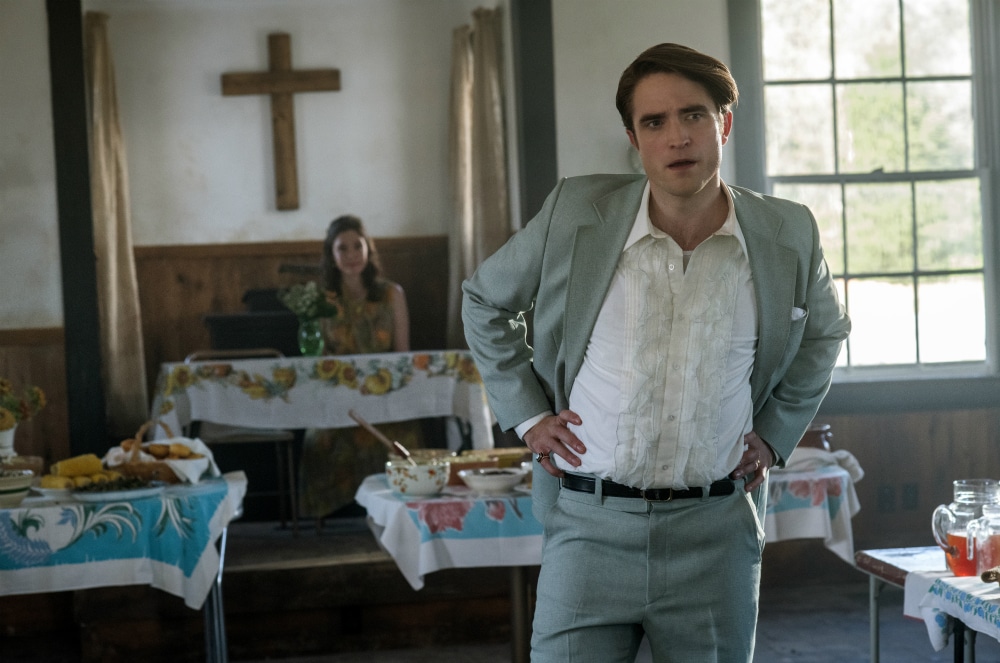 To lend the film adaption of his book credibility, author Donald Ray Pollock narrates The Devil All the Time, literally granting it a wry backwoods voice. As directed by Antonio Campos (and co-written with Paulo Campos), the ambitions of the film are obvious, its structure never less than novelistic, involving multiple time periods and a half-dozen points of view. Its reach for cosmic significance never takes flight, however, turning a dark tale into a real earthbound slog.

Bookended by World War II and the Vietnam War, The Devil All the Time‘s ostensible protagonist is Arvin, played first by Michael Banks Repeta before growing into Tom Holland. It’s his haunted father (Bill Skarsgård) who returns home from the Pacific front, turning to God to quell his mind. This reliance on religion is a major theme in the film, tying together its other characters and contextualizing its assortment of punishments. These include the violent actions of Carl and Sandy Henderson (Jason Clarke and Riley Keough), some crooked machinations involving the town sheriff (Sebastian Stan), and the fate of an untrustworthy preacher played by a slumming Robert Pattinson. I mention the latter to really drive home how expansive and star-studded this film really is. There’s a lot of talent here working hard to bring Campos’ vision into focus. And while his film’s revelations about God, country, and war’s corrosive effects do aim for hearts and minds, the point becomes rather bludgeoning by the end. Was living at this time, in this place, really as grim as all this?

What we’re left with in The Devil All the Time is a too-long generational story that for all its serious intentions feels gratuitous. The insights Campos’ film offers are not necessarily wrong—war is hell, organized religion can be a dangerous grift, sex is a powerful weapon—but watching these characters be ground up by it all does not illuminate much more than that. Maybe the power of Pollock’s language solves this problem, or maybe not. In any case, I think I’ve seen enough.